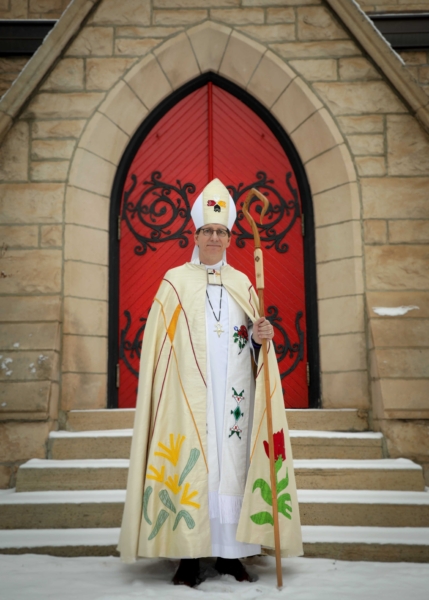 [Diocese of Wyoming] The Rt. Rev. Paul-Gordon Chandler, who was elected on Sept. 19, 2020, was ordained and consecrated as the 10th bishop of the Episcopal Diocese of Wyoming on Feb. 13 at St. Matthew’s Cathedral in Laramie, Wyoming.

Chandler, who grew up in West Africa, hails most recently from Doha, Qatar, in the Arabian Gulf, where he was the rector of the Anglican Church in Qatar, a church that hosts approximately 20,000 Christians each weekend from over 85 faith communities of varying traditions. An authority on the Middle East and Africa, Chandler is also an art curator, having founded CARAVAN, an international nonprofit affiliated with The Episcopal Church that is recognized as a global leader in using the arts to further our quest for a more harmonious future, both with each other and with the Earth, and which has held several strategic interreligious art exhibitions throughout Wyoming over the last several years. Chandler has spent much of his life focused on building bridges between the Abrahamic faith traditions of Christianity, Islam and Judaism.

He studied theological/biblical studies at Wheaton College and at Chichester Theological College in West Sussex, England, and French at the Alliance Française in Paris, France. He is married to Lynne Chandler and together they have two grown married children.

Chandler is the author of four books, most recently “In Search of a Prophet: A Spiritual Journey with Kahlil Gibran,” which focuses on the all-embracing spirituality of the early 20th century Lebanese born poet-artist and mystic, Kahlil Gibran, the author of the best-selling book “The Prophet.”

The Most Rev. Michael Curry, the presiding bishop of The Episcopal Church, said, “Bishop Paul-Gordon really brings remarkable gifts and graces to join in this new partnership in the Gospel. As you read and learn his story and get to know him, you will discover a person of deep faith, with profound and wide experience of living that faith in a variety of contexts always centered in Jesus and his way of love. I simply can’t wait to see and experience what this new partnership of the Holy Spirit, the clergy and people of Wyoming and Bishop Paul-Gordon will do. Our world needs you. And God has called you, bishop and people, together for this moment, ‘for such a time as this,’ as the Bible says. God love you, God bless you, and may God hold us all in those almighty hands of love.”

During the service, Chandler was entrusted with the historic diocesan crozier by the Rt. Rev. John S. Smylie, whom he has succeeded. The service incorporated the languages of Arapaho and Shoshone and creatively reflected the uniqueness of Wyoming – from visual imagery of the state’s beauty to highlighting its distinct diversity. Shoshone and Arapaho drum circles and cedaring were also part of the service, as well as a diocesan virtual choir. The service bulletin is available here.

The chief consecrator was the Rt. Rev. Katharine Jefferts Schori, the former presiding bishop of The Episcopal Church. Jefferts Schori says, “We look forward to the ministry of Bishop Paul-Gordon Chandler, expecting that his abundant multicultural experience will bring fresh insights and ways of contextualizing the gospel in Wyoming.  His focus on the arts offers yet another way of understanding the good news of God in Christ and should bless this diocese in an expanding ability to love and serve all neighbors. The Diocese of Wyoming has had a deeply gifted series of bishops, and Paul-Gordon will build on those well-laid foundations.”

Artists Melissa Strickler of Lander and Shirley J. Sanderson-Stephens of Cody had been commissioned to produce artwork for the service that formed an installation titled “Christ of the Frontier.”  During the service, Chandler was presented symbols of the Office of Bishop that had been crafted to reflect Wyoming, including a beaded stole made by the Eastern Shoshone and Northern Arapaho peoples that incorporates their sacred symbols, a crozier in the shape of the staffs used by the early Basque shepherds in the state, and a cope and mitre with embroidered symbols of Native American spiritual traditions which were designed and constructed by ecclesiastical fabric artist Phyllis Lehmberg.

Reflecting Chandler’s years in West Africa and the Middle East, he was given a silver pectoral cross made by Tuareg nomads in the Sahara, and a ring handcrafted in Cairo, Egypt. The service also included the languages of Arabic, Hebrew and Aramaic. Due to the pandemic lockdown in the United Kingdom, the sermon of the Rev. Samuel Wells, the vicar of the historic church of St. Martin-in-the-Fields on London’s Trafalgar Square, was livestreamed.

Bishops from around the region were in attendance, as well as the Rt. Rev. Bob G. Jones, the former Bishop of Wyoming for 20 years, from 1977 to 1997. All visiting bishops participated in the act of consecration of Chandler.

Following the consecration, Chandler said, “I am profoundly humbled to serve with the Episcopal Diocese of Wyoming.  I look forward to building on the excellent foundation that exists and the unique history of the diocese.  I believe the Episcopal Church in Wyoming is uniquely positioned for a visionary future, and I look forward to all that God has in store for us together as we discover how ‘Christ walks the Wyoming Road.’”