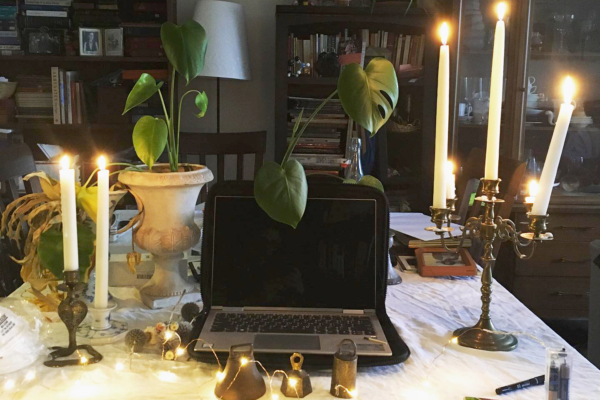 The Rev. Emily Garcia, assistant rector at Church of the Redeemer in Chestnut Hill, Massachusetts, shows the space she set up for viewing the church’s Easter Vigil in April 2020. This year, churches will be entering their second Lent during the coronavirus pandemic. Photo: Emily Garcia, via Facebook

[Episcopal News Service] As rector of Church of the Holy Spirit in Lebanon, New Jersey, the Rev. Philip Carr-Jones has a Lenten plan unlike any in his 37 years as a priest – self-imposed ashes on Ash Wednesday, drive-by palm distribution on Palm Sunday, a Maundy Thursday service on Zoom coinciding with family dinners, online Stations of the Cross for Good Friday and an outdoor Easter Vigil.

Carr-Jones, like many Episcopal clergy and lay leaders, says he’s exhausted, with the world now nearly a year into the coronavirus pandemic, but that experience also has prepared congregations as they enter their second Lent under threat of COVID-19. Livestreaming setups are established. Hand sanitizer and face masks are routine accessories for those able to gather in person. Outdoor services are common.

And as Episcopalians say personal prayers of repentance this Lent, they also will be joining Carr-Jones in a collective prayer for perseverance, to get through “one more Easter” like this, they hope, for the last time.

“The people are saying, ‘I just want to hug,’” Carr-Jones told Episcopal News Service. “We used to spend a good five minutes greeting each other [before services].” Parishioners are desperate to connect with each other face to face, he said, but that won’t be an option again this Lent, while the virus is still spreading.

Clergy interviewed for this story spoke of the fatigue they and their congregations are carrying with them into this Lenten season. They said they never expected parish life to be upended this long, now approaching a full lectionary cycle, but they also have learned much in the past year, including how technology can connect people who need to remain physically apart. With vaccination efforts ramping up, they are both hopeful for the future and humbled this year by the solemn themes of Lent.

“In some ways, this has felt like a yearlong Lent,” said the Very Rev. Nathan LeRud, dean of Trinity Episcopal Cathedral in Portland, Oregon. “Everybody is just so ready for this to be done.”

Ash Wednesday, in particular, feels more important and meaningful this year, LeRud said, and he is “more interested in ashes as a symbol of mortality and the honesty of facing death … rather than a symbol of penitence.”

“I think we’re in a time when mortality is confronting us,” LeRud said. COVID-19 can strike anyone at any time, he said, and thousands are dying from it each day in the United States. “Lent is designed to help us confront the reality of our death.”

The cathedral will offer ash kits on Feb. 17 for people to take home and impose themselves, or they may receive ashes from priests outside the cathedral. The celebrants will be masked and gloved and will sanitize their hands between each imposition of ashes. In a pandemic twist, the cathedral recruited retired clergy for the task. Those older clergy once were at greater risk from COVID-19, but now their age group has been the first to receive vaccinations. 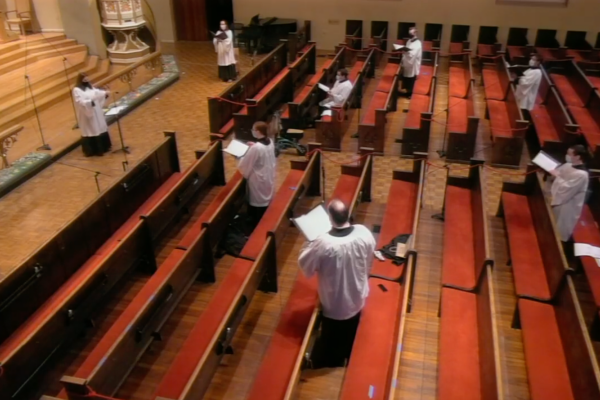 This Lent, LeRud and other clergy said they are emphasizing some of the season’s more positive themes, rather than asking their congregations to dwell solely on repenting of what they’ve done wrong. The Rev. Andy Andrews, rector of the Church of the Holy Trinity in Vicksburg, Mississippi, described this Lent as “a season of healing, a season of rebuilding, a season of sacrifice.”

“I feel it in my heart that this is just going to be the most meaningful Lent,” Andrews told ENS. “It seems like we’re breaking into a new beginning.” 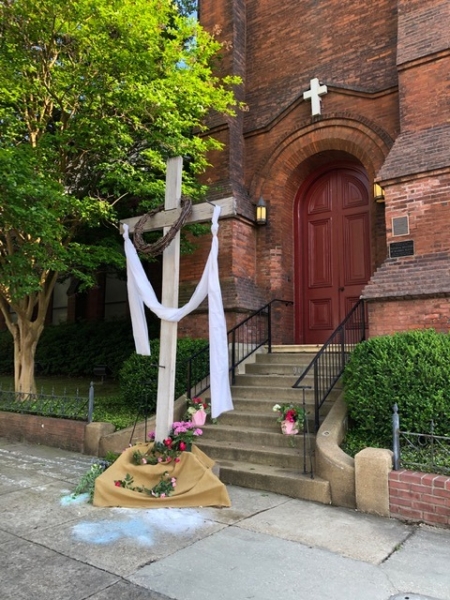 A cross is set up outside the Church of the Holy Trinity in Vicksburg, Mississippi, for Easter 2020. Photo: Holy Trinity, via Facebook

Before the pandemic, about 140 people worshipped at Holy Trinity each Sunday, and Andrews had never heard of Zoom and was rarely on Facebook. Now, Holy Trinity’s leaders rely on both to engage with the congregation from a distance. The past year has been a roller coaster ride, Andrews said, with in-person worship suspended at first, resuming last summer and halting again in the fall with a new surge in COVID-19 cases.

For Ash Wednesday, Holy Trinity will welcome a limited number of worshippers into the church at two services. Details about imposition of ashes are still being worked out. For those who don’t attend the in-person services, a curbside option for ashes will be available.

As congregations plan their second round of Holy Week and Easter services during the coronavirus outbreak, which was declared a pandemic in March 2020, this will be the first Ash Wednesday under those conditions. Episcopal leaders are reminding congregations that the ashes are not a sacrament. They aren’t a mandatory part of the Ash Wednesday liturgy and, if included, need not be imposed by a priest.

The Rt. Rev. J. Neil Alexander, retired bishop of Atlanta, published an article in January that examined the historical roots of the liturgy. Alexander’s widely shared piece suggests sprinkling the ashes as a possible alternative to rubbing them on foreheads.

Diocesan leaders have provided additional guidance to their congregations. The Diocese of Chicago recommended self-imposed ashes as the least risky of several options. Pennsylvania Bishop Daniel Gutiérrez offered a range of options in his diocese, from sprinkling ashes to applying them to foreheads with Q-tips.

“The holy season of Lent calls us to remember our mortality,” Gutiérrez said. “Let us take every precaution to protect and preserve the lives of those in our care.”

Congregations also are putting fun new spins on old Lenten traditions during the pandemic, starting with Shrove Tuesday on Feb. 16. Carr-Jones, the New Jersey rector, usually cooks the pancakes for Holy Spirit’s annual Shrove Tuesday dinner. This year, he is inviting parishioners to join him online instead, as they cook pancakes together.

The Rev. Emily Garcia, assistant rector at Church of the Redeemer in Chestnut Hill, Massachusetts, is looking forward to joining some members of her congregation for a Shrove Tuesday dance party on Zoom. One person will serve as DJ while participants dance their hearts out, enjoy food at home and interact with each other online.

“I’ve got my shoes picked out,” Garcia told ENS.

The idea was suggested by two parishioners. If nothing else, it will give participants “something to look forward to” amid the daily uncertainties of life during the pandemic, said Garcia, who leads the church’s youth ministries.

Almost a year into the pandemic, Garcia is weary from the “perpetual, low-level anxiety” that she and others feel as they prepare for Lent, but her work on worship services for families has provided an uplifting counterbalance. “I feel real positive and hopeful about that, and I feel especially positive because so many families have made the effort to attend.”

In Boca Grande, Florida, the fellowship dinners that St. Andrew’s Episcopal Church usually offers during Lent will return this year but online rather than in person – bring your own soup – and the Rev. Michelle Robertshaw, St. Andrew’s rector, will offer online Evening Prayer on Mondays, Wednesdays and Fridays.

Robertshaw senses fatigue but also some excitement, as she and parishioners reimagine how they can engage with each other, especially in this second Lent of the pandemic. “I feel more prepared,” she told ENS. “And I actually feel a little bit more of an opportunity to engage possibilities that I might not have thought of last time around.”

Last year, she organized a golf cart parade of palms for Palm Sunday and plans to do that again this year. An ecumenical sunrise service for Easter was canceled this year, but Robertshaw is planning an in-person service at her church. The congregation has limited attendance at its in-person services to 30 people, with advance registration required. Most services are celebrated outdoors, as will the Easter service. 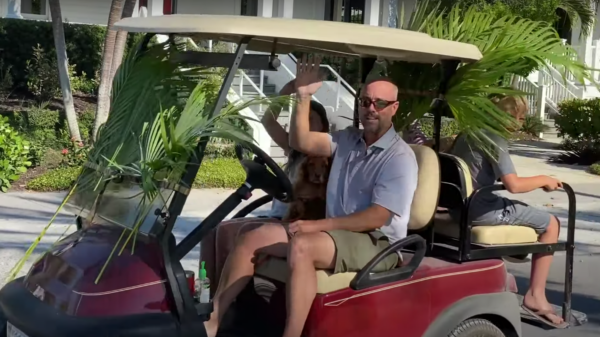 A parishioner waves from a golf cart in Boca Grande, Florida, in April 2020 during a Palm Sunday procession organized by St. Andrew’s Episcopal Church. Photo: St. Andrew’s, via YouTube

The Episcopal Church in Colorado asked its congregations to shift worship to all online services around Advent and Christmas because of the latest surge in coronavirus cases. The case count has decreased since then, giving hope for a return to some in-person worship through Lent.

“Last Lent, a lot of us thought that this would be over in a couple months,” said the Rev. Alex Dyer, the diocese’s canon to the ordinary. “There’s a real kind of loss and emotion I’m hearing from priests that, ‘Oh my gosh, we have to do this a second time.’”

The pandemic has forced congregations to change many of the tactile Lenten practices they had taken for granted, Dyer said, such as ashes on foreheads for Ash Wednesday and washing of feet on Maundy Thursday. “We’re very incarnational,” he said, and the sense of loss isn’t just over the inability to gather fully. “In another sense, it’s the physicality of each of these rites. We’re not able to do it in the same way.”

As with last year, however, the pandemic isn’t canceling Holy Week or Easter, and Dyer said the diocese expects to allow some churches to resume limited in-person worship services this Lent. Often that will mean 10 or fewer worshippers meeting outdoors, though specific guidance will depend on various factors, such as the size of church building and quality of ventilation.

Last year, as the pandemic’s initial COVID-19 surge prompted the widespread suspension of in-person worship services, Presiding Bishop Michael Curry voiced his support for dioceses and congregations that were practicing a “Lenten fast” from those gatherings. Helping to slow the virus’ spread was “a sign of love for one’s neighbor,” he said, even if it meant empty pews on Easter.

At Trinity Episcopal Cathedral, the fast from in-person worship has yet to end. The Oregon cathedral remains closed to the public, and LeRud, the dean, maintains a weekly routine of online-only services.

That doesn’t mean the cathedral has been completely off limits. Two days a week, it accepts “Cathedral Pilgrimage” reservations, so a few individuals at a time can come for up to an hour to pray, meditate, receive some of the cathedral’s reserve Eucharist, light a candle and visit its courtyard and memorial garden.

LeRud said he thinks parishioners will treasure those visits this Lent, though he also hopes that, at some point during the season, he will be able to resume in-person worship, which likely will be capped at 50 people at a time.

The cathedral had something of a test run on Jan. 30 when it hosted the consecration of Oregon Bishop Diana Akiyama. “There were 50 people in that building, and that was the first time in a year,” LeRud told ENS. “Just the feeling of having people in the building again was such a rush. It was very moving, and we were able to do it safely.”

Easter services typically draw a thousand people to the cathedral, LeRud said. Even a small crowd would be a blessing this year. “I don’t think I can do another Easter with an empty cathedral,” he said, but if the COVID-19 case counts surge again, he is prepared to broadcast the service from the cathedral, to a congregation forced to watch from home.

Either way, Easter will be a celebration, he said. “We all need a chance to celebrate some kind of new life.”