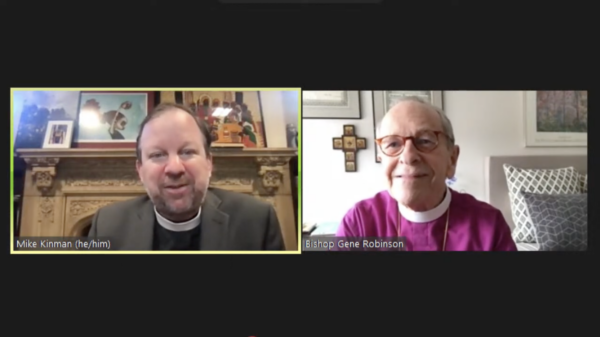 The Rev. Mike Kinman, rector of All Saints Church in Pasadena, California, talks with the Rt. Rev. Gene Robinson during All Saints’ virtual Rector’s Forum on Feb. 14, 2021.

[Episcopal News Service] The Rt. Rev. Gene Robinson talked of the importance of seeking forgiveness but also engaging others with grace in a public conversation hosted virtually by All Saints Church in Pasadena, California, on Feb. 14.

Robinson talked with All Saints’ rector, the Rev. Mike Kinman, as part of the church’s Rector’s Forum series, before giving the sermon for the Sunday Eucharist services, in an already scheduled appearance a week after Robinson participated in a service at Washington National Cathedral that left some LGBTQ Episcopalians disappointed and hurt. The cathedral’s dean and the bishop of Washington have faced a backlash after the dean invited Max Lucado, a popular author and evangelical pastor who opposes same-sex marriage, to preach.

Kinman and Robinson discussed the deep wounds and divisions in the church that the controversy’s fallout has revealed, as well as ways to balance accountability with reconciliation.

“I happen to believe that God is still revealing God’s self, and we got a lot of things wrong,” from the church’s complicity in slavery to its historic intolerance of LGBTQ people, said Robinson, the former bishop of New Hampshire who became the first openly gay bishop in the Anglican Communion in 2003. 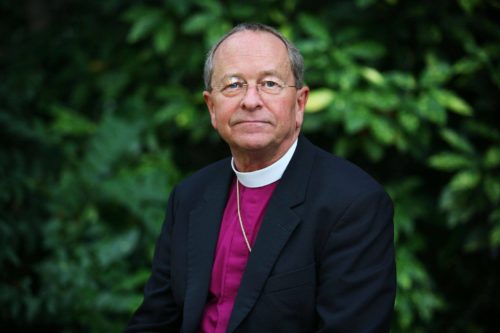 Robinson accepted a last-minute invitation to preside at the National Cathedral’s Feb. 7 Eucharist during which the sermon was given by Lucado, who is affiliated with Oak Hills Church in San Antonio, Texas, and is a longtime opponent of same-sex marriage. He compared it to legalized polygamy, bestiality and incest in a 2004 article, for which he has since apologized.

During his conversation with Kinman, Robinson commended Hollerith and Budde for their apologies, saying “they really gave a lot of care to it.”

“And I think what they saw as their sin in this – if I can say it that way – is that they failed to listen, or to take as seriously as they might have, the feedback they were getting [after news of Lucado’s invitation to preach caught traction] about how painful this would be to some or many in the LGBTQ community.”

Robinson himself has been criticized by some for his remarks during the Feb. 7 service, which some Episcopalians felt understated the ongoing struggles that LGBTQ people face. “While a lot of us have experienced some awful things in our lives, we’ve won” the battle for LGBTQ inclusion in the church and society, Robinson said at the cathedral service. “We work every day to make that true, but we know how it ends.”

During the All Saints discussion, Kinman asked Robinson about that remark – how he manages the tension between the belief that justice does ultimately triumph and the reality that it doesn’t feel that way for many people.

“Part of the church’s role, be it clergy or laity, is to point to that tension,” Robinson explained. “I expect there always to be work to be done. But knowing that that’s how it ends empowers me to do the work I need to do now. And it helps me be resilient enough to withstand setbacks, even serious setbacks.”

Robinson reiterated his reasoning for accepting Hollerith’s invitation to preside at the Feb. 7 service.

“I think he just wanted to remind people of the cathedral’s commitment to LGBTQ people and indicate that or remind people of that by my presence,” he said. “I said yes to Randy because he’s become a friend and I didn’t know what was right or wrong in this controversy going on, but I wanted to be there to support him.”

Robinson said he is accustomed to dealing with people who hold views that he opposes; in his current role as vice president of religion for the Chautauqua Institution, he invites guest preachers who make up “a wide spectrum of people, including conservative evangelicals, and some of them are clearly not where I would want them to be in terms of their attitudes towards LGBTQ people.”

“So that was the sort of window into which I saw what was going on [at the National Cathedral], at least from where I sat, and I wanted to affirm whatever part of this had to do with reconciliation.”

Kinman and Robinson addressed the struggle in determining where to draw the line at shunning someone for things that person has done in the past – a question with no clear answer.

Or, as Kinman put it: “Is there a statute of limitations on some terrible thing you did or said?”

“Are we a society that allows for absolution?” Kinman asked. “If you look at our sacrament of reconciliation, you don’t just have absolution, you have self-examination, confession, reparation and repentance – amendment of life – and then absolution.”

Robinson expressed a desire for Episcopalians and Americans to be willing to be surprised and transformed by unexpected truths, a point echoed later in his sermon on the Transfiguration of Jesus. Such an attitude, he said, allows for the prophetic vision that can lead people out of division and toward justice.

“Whether you’re speaking about race or LGBT [issues] or whatever, it takes an enormous amount of intention and willingness to open oneself to learning new things,” Robinson said. The lesson of the Transfiguration, he argued, is “to be brave enough to allow the reality of things to be revealed to us and not so defensive that we fight off seeing what we’ve not seen before.”

“Once you’ve seen it, you can’t unsee it, and people of goodwill and certainly religious people should seek to amend not only [their own lives] but our corporate life, and the church ought to be the headlights in that journey, not the taillights.”