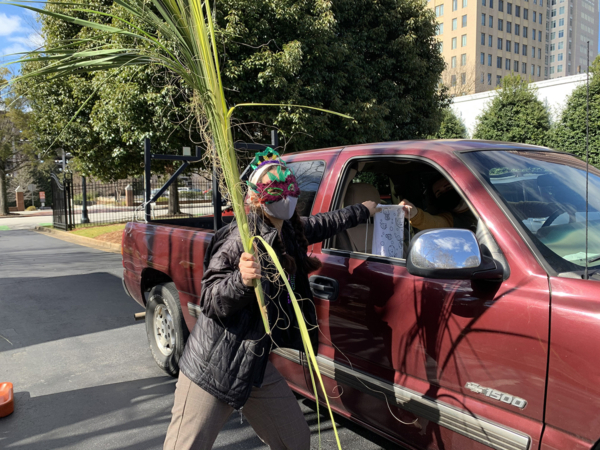 [Episcopal News Service] At last year’s Mardi Gras, many Episcopalians in New Orleans and beyond wore carnival masks and partied. But as that day approaches this year on Tuesday, Feb. 16, face masks to protect against the spread of COVID-19 and socially distanced celebrations have become common. For some revelers, responding to restrictions with creativity has added greater determination to planning this year’s events.

“Mardi Gras is usually the time right before we get ready for a serious time, but since last year, we’ve been in a serious time, and people are really suffering leading up to Mardi Gras,” said Liz Beal Kidd, director of children, youth and family ministry at St. Luke’s Episcopal Church in Atlanta, Georgia. “This year it’s a different message for Mardi Gras: that we aren’t giving up all of our traditions even if they have to look different. You can’t keep our spirit down.”

Mardi Gras, which is French for “Fat Tuesday,” is a secularized Christian tradition from medieval times that marks the final day before the 40 days of fasting known as Lent. Another name for it is Shrove Tuesday; “shrive” means to repent or sacrifice. Because meat and fatty foods were restricted during Lent, Shrove Tuesday became the last chance to consume them before they spoiled. The English tradition of eating pancakes on Shrove Tuesday has been adopted by many Episcopal churches.

Party in a takeout box 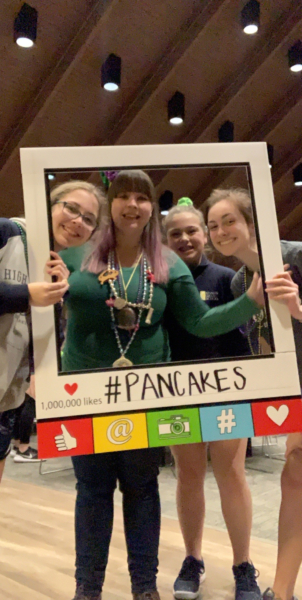 Across the church, Mardi Gras events have been canceled, scaled back or moved online, with many parishes adopting a do-it-yourself approach.

St. Luke’s usually hires a jazz band, welcomes parishioners in costume, and feeds them from pots of red beans and rice and jambalaya, ending the festivities with a “second line” dance parade to the memorial garden for the traditional benediction. This year, church members can pick up a Cajun-inspired meal to eat at home.

Across town, members of St. Anne’s Episcopal Church and Day School won’t gather to color their alleluia banner, which is buried on Mardi Gras and unearthed Easter morning. Instead, when they pick up their pancake kits, they will leave index cards decorated with alleluias. “We’ll make a communal banner of the cards and put out a video of it, with a short sermon, that our families can watch when they have time,” said Tabi Tobiassen, St. Anne’s director of children’s and youth ministry.

At Christ Episcopal Church in San Antonio, Texas, parishioners can still enjoy the annual outdoor Mardi Gras Jazz Mass on Feb. 14, but the invitation came with a caveat: “Sorry, but this year you’ll have to make your own gumbo lunch.”

The carnival season is even low-key in New Orleans, where elements of the traditional Mardi Gras parades are coming to residents instead of vice versa. Houses are being decorated instead of parade floats, and no beads or trinkets will be tossed. Churches like St. George’s and St. Andrew’s are delivering “make your own throw” kits for parishioners to exchange, without physical contact, at a pegboard at St. George’s. To honor the traditional circular king cake and raise money for Camp Able NOLA, a St. Andrew’s ministry that serves kids and adults with special needs, youths made glittery door wreaths, each with a tiny plastic baby, representing Jesus, like the ones hidden in king cakes. 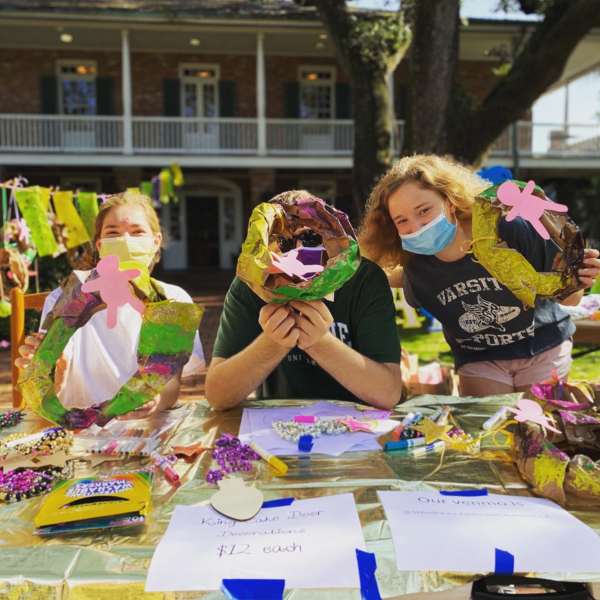 “While you can’t stop Mardi Gras, churches are not having their typical fundraisers centered around the parades or parade watching parties. I suspect it will be a quiet day with people celebrating Mardi Gras in their own homes,” Karen Mackey, the Diocese of Louisiana’s communications director, said.

On New York’s Upper East Side, the pandemic can’t shut down the Church of the Holy Trinity Pancake Supper and Talent Show, established over 20 years ago by actor and parishioner Dudley Stone. This year, parishioners will have to flip their own pancakes at home during a virtual event. Emcee Erlinda S. Brent, the church’s administrator, will kick off the event with her impression of Frances McDormand as God in the TV series “Good Omens.” The Rev. John F. Beddingfield, rector, is preparing his trademark groan-inducing monologue that includes witticisms like “How do you learn to read the Scriptures? You ‘Luke’ into them!”

“It’s silly and I think we need silly,” Brent said. “With so much seriousness and sadness right now, celebrating this tradition is kind of uplifting.”

Some major fundraisers are tied to Mardi Gras and its culture. Birmingham’s annual Gumbo Gala, the largest Episcopal social event in Alabama, draws up to 3,000 people and has raised as much as $30,000 for Episcopal Place, an independent-living housing complex for seniors and adults with disabilities. The gala, inspired by an influx of Louisianans after Hurricane Katrina, pits parish teams in a one-day gumbo cook-off, as the partiers feast on the gumbos. 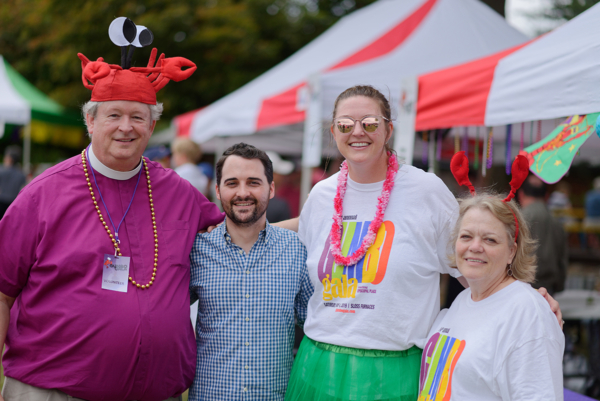 The 16th Gumbo Gala will be held April 17 as an outdoor event with a gumbo truck, a band and no cooking teams. “We’re continuing to build a brand and plan to be part of the community again in full force in 2022,” said Jamie Whitehurst, director of development for Episcopal Place. 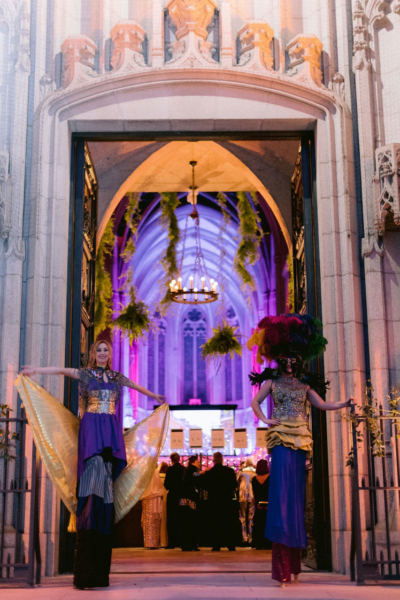 This year tickets are $25 for virtual Carnivale, and guests will contribute prayers and intentions to be printed on colorful ribbons and strung along the banisters leading to the cathedral’s Ghiberti doors. The tethering of ribbons symbolizes the creation of a global community.

Mardi Gras 2020 was, at many of these parishes, the last come-one, come-all event before the pandemic. There’s wistfulness in looking back.

“We had families who had moved from New Orleans bring a ton of beads and a king cake,” said Tobiassen, the children and youth director at St. Anne’s in Atlanta. “We had 60 or 70 people last year, and it’s sad to see the photos and realize that I haven’t seen many of the people in person since Mardi Gras. It’s really sad thinking of where we could have gone with that energy and where we ended up.”

For some longtime St. Anne’s parishioners, carrying on with COVID-19 restrictions affirms their commitment to long-standing traditions.

“I’m documenting with video and photographs because our children’s children are going to ask how we did Mardi Gras in 2021,” Kidd said. “We’ve been going through COVID-19 like it’s a long season of Lent — of reflection and quiet — and it was forced on us. But the pandemic has done what Lent does, which is to create a feeling of gratitude and thanksgiving. We are never, ever, ever going to take for granted anything again.”

– Michelle Hiskey is a freelance writer based in Atlanta. She is a member of St. Bartholomew’s Episcopal Church.