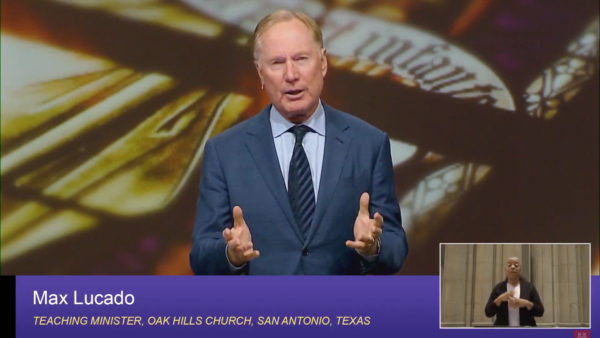 [Episcopal News Service] The Rev. Max Lucado has apologized in a letter to Washington National Cathedral after his invitation to preach in a cathedral worship service sparked outrage over his past statements about homosexuality and same-sex marriage.

Lucado, a popular evangelical author and pastor, said in the letter dated Feb. 11 that he still believes in “the traditional biblical understanding of marriage” but now regrets the words he used in a 2004 sermon and article. Critics have condemned his comparison of same-sex marriage to legalized polygamy, bestiality and incest and his suggestion that homosexuality is something that can be changed by pastoral care.

“I now see that, in that sermon, I was disrespectful. I was hurtful. I wounded people in ways that were devastating,” Lucado said in his Feb. 11 letter, a copy of which was obtained by Episcopal News Service. “It grieves me that my words have hurt or been used to hurt the LGBTQ community. I apologize to you and I ask forgiveness of Christ.”

Lucado’s apology comes a day after National Cathedral Dean Randy Hollerith and Washington Bishop Mariann Budde issued parallel apologies for inviting Lucado to preach by prerecorded video and then failing to heed calls to rescind the invitation after Lucado’s 2004 statements were condemned. Hollerith and Budde also said they would hold a listening session at 7 p.m. Feb. 21 to receive additional feedback from the LGBTQ community.

ENS reached out to Lucado and his church several times late last week and early this week, seeking comment on whether his views on homosexuality have evolved. Church staff members said he was unavailable.

His letter to the cathedral does not specify how much of what he said in 2004 he still believes. “Faithful people may disagree about what the Bible says about homosexuality, but we agree that God’s holy Word must never be used as a weapon to wound others,” he wrote in his apology letter.

“LGBTQ individuals and LGBTQ families must be respected and treated with love. They are beloved children of God because, they are made in the image and likeness of God,” Lucado’s letter says. “Over centuries, the church has harmed LGBTQ people and their families, just as the church has harmed people on issues of race, gender, divorce, addiction, and so many other things. We must do better to serve and love one another.”

Lucado is a bestselling author of self-help books and the pastor of Oak Hills Church, a megachurch in San Antonio, Texas. His 22-minute sermon for the cathedral’s Feb. 7 livestreamed service focused on easing life’s anxieties by feeling the presence of the Holy Spirit. It did not include references to sexuality or same-sex marriage, but critics argued that the cathedral never should have granted him the privilege of preaching, given the harm caused by his past statements on homosexuality and the lack of evidence that he had disavowed them.

“Deep pain was caused to the LGBTQ community by our invitation to Max Lucado to preach at the Cathedral last Sunday,” Kevin Eckstrom, the cathedral’s chief communications officer, told ENS by email. “We appreciate him acknowledging the pain his past remarks have caused, and we hope that he will find a way to truly listen to those who have been hurt by his words. For us, here as the Cathedral, we are now in the mode of listening to our community so we can do better going forward.”