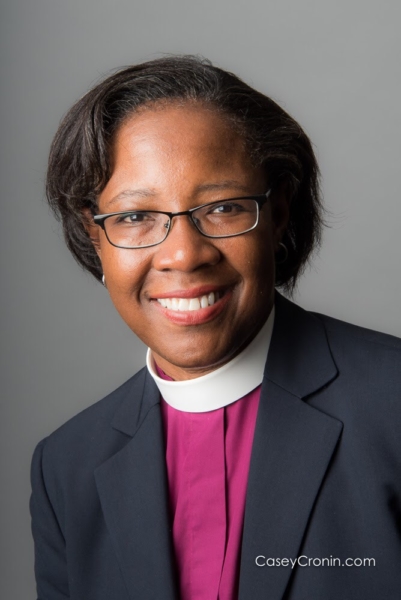 [Faith & Leadership] When Bishop Jennifer Baskerville-Burrows was growing up in New York, she walked all over the city, reveling in the historic buildings all around her.

She was inspired to study architecture, urban planning and historic preservation as an undergraduate and graduate student. Then, encouraged to discern a call to ministry by leaders at Trinity Church Wall Street, where she was an active member, she earned a Master of Divinity degree from Church Divinity School of the Pacific.

“I was being called to be a priest who also knew something about preserving all of these old church buildings,” said Baskerville-Burrows, who wrote her master’s thesis at Cornell University on the role of church buildings in revitalizing downtown communities.

In her current role as bishop of the Episcopal Diocese of Indianapolis, she continues to combine these areas of expertise.

“Instead of seeing buildings as albatrosses, I have always seen them as opportunities for ministry,” she said. “To me, they are part and parcel of the work of being bishop.”

Baskerville-Burrows, the first Black woman to be elected diocesan bishop in The Episcopal Church, oversees 48 churches in central and southern Indiana. She spoke with Faith & Leadership’s Sally Hicks about the role of religious buildings in ministry, in communities and in the work of racial justice.

Faith & Leadership: How do these interests combine in your work now?

Jennifer Baskerville-Burrows: Bishops have oversight over people and assets that make ministry possible, and buildings are usually the largest asset that congregations hold if they don’t have endowment funds.

Those are all signs and signals about the vitality and possibility for ministry of a congregation to me.

Buildings come with all kinds of anxiety, because often people don’t know what to do about them. I see that part of my role pastorally is to help congregations and their leaders not see them only as sources of anxiety.

JBB: I talk about it a lot. We try to create a context where the building is not just a topic for when there’s an emergency — the roof fell in or there’s a flood or we can’t get in our buildings because there’s a pandemic.

I meet with all the priests and deacons of the diocese who are active every year. We talk a lot about how if you’re going to have a building, it’s got to be tied to the mission. And congregations then need to know what their mission is.

This time that we’re in a pandemic, we’re saying, “Well, what kind of use do you want these buildings to serve, now that you’ve been out of them for all this time?”

I can set the conversation. It’s a lot of fun to be able to do that.

F&L: How can you help folks reframe their thinking about the building, moving it from liability to asset?

JBB: I think part of it is talking about it that way. It’s complicated. There’s no one easy thing to do.

A lot of the talk in the church is that the building is always a problem — except for our worship space, which we love and we never want to change.

If we think about the building as an asset, which has been a lot of the work of Partners for Sacred Places and a couple of other statewide preservation groups, [we change that conversation].

So how do we use them for the ways in which they can be an asset not just to us but to the rest of the community — which is an ethic the church should have all along, right?

To those who are in small congregations struggling with big buildings, I think first of all trying to help them see that yes, it’s a burden, but there are also some opportunities, and it may be that that congregation shouldn’t be in that building anymore.

As a preservationist and an ordained person, I’ve never been fundamentalist about it.

I’d say many of our church buildings are not best cared for by our own people. I’d rather see them be put in the hands of somebody else who can take care of it better — a different denomination, a different use — than to see what our churches do by letting them crumble around them because they can’t let them go. The demolition by neglect — that’s the train wreck.

We’re going to go over that cliff very quickly in the next five or six years, with the number of buildings that will not be able to be sustained by the congregations that have title to them.

F&L: Do you think the pandemic will hasten congregations’ going over the cliff?

Not all of the congregations are going to make it through this pandemic in the way that they were before. And that’s ultimately a hopeful thing for the church.

Because we’re finally asking the questions, “What is this congregation for? What is the building for now that we’re not in it?”

Most of our congregations, and I think this is true in other denominations and faith groups as well, to the extent that they’ve kept their buildings open, it’s been primarily for serving the community.

People have been worshipping online, but the ministry and presence has continued. That’s teaching us something we should be paying attention to, I think.

Clearly, we don’t need the buildings to be a church community. We need to be able to gather, but we may not need to do it in the buildings we’ve historically done that in. And if the buildings are hampering our ability to do the ministry, then we need to ask some hard questions about that and confront the answers.

We know what’s going on on the ground, because we’re checking in on them on a rotating basis. We are trying to have congregation leaders check in on their people between my visitations, the visitation of my canons, just watching carefully what’s happening. We meet every other week with the clergy and wardens who are serving churches who don’t have settled clergy.

It’s not a survey, but we’ve got good anecdotal data to give us a sense of what’s happening.

I’d rather have a small diocese in terms of numbers of congregations that are really clear about who they are, why they exist, what their call to walk with Christ is about and what their building can do to help support that mission than to have 48 churches, half of which don’t know why they’re there and their building is just empty most of the week.

That’s not edifying to God. It just isn’t. The work of my episcopate is to help shape that conversation.

F&L: What’s your vision for your diocese, which has a lot of small-membership congregations?

What I say to people in the diocese is that we have started churches, congregations, and we have closed buildings over the whole of our 180-some-year history. We’re going to continue to do that, and we’re not going to be afraid of it.

So we can start a congregation like Good Samaritan, which has got some land banked. They’re probably going to build a building that has a ministry-center focus with a space for the congregation to worship. It’s not going to be a big worship space with a small parish hall.

They’re flipping that script, because they’re a community that’s built upon the notion that they serve.

We have St. John’s, Speedway, which is worshipping at the golf course clubhouse next to the track at the Indianapolis Motor Speedway. They’re a pretty healthy congregation of some 30 people that is about as vibrant and active as I would want some of our most long-standing congregations with stone buildings to be.

The mission we have as a diocese is to be beacons of Jesus Christ, to be inviting people to join us in the work of transformation, to stand with the marginalized and vulnerable and be working to transform systems of injustice and to be networking with anybody who will come along with that vision, people of faith or none.

That’s the work, and to be raising up leaders, lay and ordained, to do that.

When I get up in the morning, my question is — after thanking God for a new day — how are we doing that?

Because of the legacy of the Lilly family over the years, we have resources to say, “Your roof has caved in? We can give you a revolving loan and help you with that.”

[My predecessors and other leaders] set up that fund because they understood the value of having some resources set aside for building emergencies — because those things happen — so we don’t have 48 emergencies all the time with the buildings.

The conversation I have with other bishops is, “How do you put in place some of those mechanisms? How do you change that conversation in the diocese around the buildings?”

When I think about most of my colleagues in the Northeast, [I know that] their problems are outsized compared with ours, because of the size of their buildings, the price of the real estate, the price of living and all of that stuff. I just need to say that up front.

But I don’t think that any of that gets us out of the conversation of “How does our building serve our mission?”

F&L: How is your work with buildings connected to your commitment to racial justice?

JBB: I just think racial justice is the work that has to be done 24 hours a day, all the time, every place. To the extent that buildings can host conversations, I think this is a gift that the church is learning to step into, even now in this pandemic.

The place where social justice and racial justice issues come into play with church buildings is really more about the fact that in The Episcopal Church and lots of mainline churches, we have decided that we don’t need churches in poor, Black and brown neighborhoods and we’ve opened up churches in suburbs. This is the story across Protestantism.

The fact is that particularly in poor, Black and brown communities, a church building plays a lot of roles for that community way beyond what the small congregation that’s using it on Sunday [may need].

Collaboratively, we’re going to work with those institutions and with the Diocese of Northern Indiana to do this asset mapping. We talk about the assets of our leadership, and now we’re saying, “Well, what are the assets that the building has — and every building has them — that provide opportunities for a more effective mission?”

This story was originally published by Faith & Leadership and is republished here with permission.