The cathedral, in a Feb. 3 Facebook promotion of Lucado’s upcoming sermon, describes the Texas-based minister as a bestselling author who will preach about “how God can bring calm to our chaos, and you won’t want to miss it.” By late Feb. 5, that post had generated more than 200 comments, a majority of them questioning the decision to turn the cathedral’s pulpit over to Lucado.

Opponents of that decision also have circulated an online petition urging the cathedral to rescind its invitation to Lucado over his “fearmongering and dehumanizing messages.” They point specifically to a 2004 article in which Lucado calls homosexuality a “sexual sin” and outlines a biblical argument against gay marriage while suggesting it could open the door to legalizing polygamy or incest.

Cathedral Dean Randy Hollerith defended the decision in a written statement that the cathedral is providing to people who ask about the invitation to Lucado.

“Our commitment to our LGBTQ brothers and sisters is unshakable and unchanged,” Hollerith said. “We believe the Gospel calls us to nothing short of full embrace and inclusion.” Hollerith continued that he understands the concerns about Lucado’s past statements on LGBTQ issues and doesn’t agree with those views, but “repairing the breach” starts with listening to people who disagree.

“When we only engage with those with whom we agree on every issue, we find ourselves in a dangerous (and lonely) place,” Hollerith said. “My hope is that all churches and faith communities will find ways to open their doors to perspectives different from their own.”

Critics, however, accuse cathedral leaders of taking a step away from The Episcopal Church’s support for LGBTQ inclusion by giving Lucado such a position of prominence in the cathedral’s online worship service.

“I just think this is a staggering display of presumption on their part,” said Jim Naughton, a former canon for communications with the Diocese of Washington who served under then-Bishop John Chane from 2002 to 2009. Naughton, now a partner in Canticle Communications, spoke to Episcopal News Service by phone on Feb. 5.

“Max Lucado does not have any problem making himself heard. He does not need the cathedral, the pulpit of Washington National Cathedral, to reach his audience,” Naughton said. “The issue is whether Washington National Cathedral wants to give its imprimatur to him and wants to extend the prestige of its pulpit. … I find it incredibly disrespectful.”

In additional to selling more than 120 million copies of books on faithful living, Lucado is pastor of Oak Hills Church, a nondenominational megachurch in San Antonio, Texas, that once was affiliated with the Churches of Christ.

“He was actually seen as kind of a progressive in those circles, but he was someone who, when he speaks up on something, certainly people listened, at least in that denomination,” said the Rev. Scott Zaucha, an Episcopal priest in Illinois who grew up in Dallas, Texas, in a Church of Christ family.

Zaucha told ENS he was 23 and attending graduate school in Chicago, Illinois, in 2003 when he told his family he was gay. His parents responded to the news by saying they didn’t want him to come home, and when his church learned of his sexuality, it “disfellowshipped” him. His family kept in contact, but only to send him religious materials trying to convince him to renounce his homosexuality.

“One of the articles that they sent me was a Max Lucado article from 2004,” he said.

“Frankly, that period of my life almost cost me my life. It was deeply traumatic, but with help, therapy, friends and The Episcopal Church, I was able to work my way through it,” he said. He fears that giving anti-gay religious leaders a wider platform could be devastating to members of the LGBTQ community who can’t find the kind of support that he found. 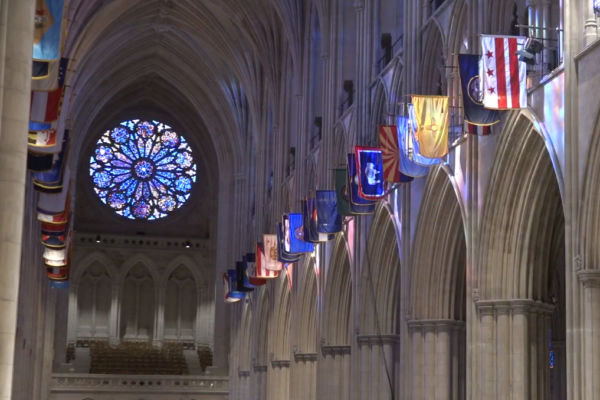 Washington National Cathedral has increased its number of guest preachers during the pandemic because of the ease of including online contributions from notable faith leaders no matter where they are located.

Hollerith’s statement doesn’t go into details about Lucado’s LGBTQ views, but it affirms the cathedral as “a house of prayer for all people, proudly so.”

“That means this cathedral, and this pulpit, are big enough and strong enough to welcome pastors, rabbis, imams, clergy of every faith,” Hollerith said in the statement. “It does not mean we agree with everything they might believe, but it does mean that we exhibit and inhabit a sense of open handed welcome.”

Cathedral spokesman Kevin Eckstrom told ENS that Lucado is one of several guest preachers invited to participate during the past year in the cathedral’s online services, which have been popular nationally during the coronavirus pandemic, attracting several thousand live viewers each Sunday. Other guests have included Archbishop of Canterbury Justin Welby; historian Jon Meacham, an Episcopalian; sociologist Michael Eric Dyson, an ordained Baptist minister; and Bishop William Barber, a Disciples of Christ pastor and co-chair of the Poor People’s Campaign.

Lucado was invited to share his wisdom on God and the Holy Spirit, not to preach about LGBTQ issues, Eckstrom underscored. “The cathedral takes its role seriously, and we recognize the prominence of the pulpit, but we also believe that the church is big enough to be able to encompass everyone, even in the areas we disagree.”

Eckstrom said the cathedral had no plans to reconsider its invitation to Lucado, who will submit a prerecorded video for the online service. In response to an ENS inquiry to Lucado’s church seeking comment for this story, the pastor’s assistant said by email, “he considered it a high honor to be invited to speak at Washington National Cathedral.”

It won’t be the first time Lucado has preached in an Episcopal church. He has done so several times at St. Martin’s Episcopal Church in Houston, Texas, which is The Episcopal Church’s largest congregation by membership and attendance.

“This phenomenal congregation provides hope and help to thousands,” Lucado said of St. Martin’s in Facebook post promoting his most recent sermon there, in March 2019. The Rev. Russell Levenson, St. Martin’s rector, calls Lucado a friend.

“I’ve known him for years now,” Levenson told ENS. “I would say he’s one of the most loving and engaging of the pastors that I’ve ever known.”

Levenson added that he thinks Lucado shares the view that everyone should be welcomed in the church, gay or straight, but Levenson and Lucado both draw the line at supporting same-sex marriage. Levenson does not officiate same-sex weddings at St. Martin’s, but he has helped gay and lesbian couples find other churches that offer those rites. Levenson said that while he’s personally conservative on the issue, he’s “happy to be in a church that allows same-sex marriage.”

“Frankly, it kind of baffles the mind,” he said. “We’re going to be a church that moves toward full inclusion in every direction, or we’re not.” And he lamented over “these absolutely ridiculous battles over culture wars that frankly have no place in the beating heart of the church.”

Naughton doesn’t deny there is room in The Episcopal Church for the full range of beliefs among Jesus’ followers, but he thinks cathedral leaders aren’t simply promoting conversations across difference by inviting Lucado to preach.

“They aren’t choosing to have a lecture series that has diverse views. They’re putting an anti-gay preacher in their pulpit in the context of an Episcopal liturgy,” he said.

Some commenters on Facebook also pointed out that the ashes of Matthew Shepard, the gay college student who was murdered in 1998 in Wyoming, were interred at the cathedral in 2018.

Zaucha, who serves as rector at St. Ann’s Episcopal Church in Woodstock, Illinois, said he first learned about The Episcopal Church after the Rt. Rev. Gene Robinson of New Hampshire was elected the first openly gay bishop in the church in 2003. “I knew it was a safe place,” said Zaucha, who was confirmed in 2006 and ordained to the priesthood in 2018. He and his husband have been married four years and have six children.