[Episcopal News Service] The Diocese of Oklahoma raised more than $164,000 in its annual Bishop’s Appeal, but the money will not support Episcopal ministries this year. Instead, Oklahoma Bishop Poulson Reed traveled to Tulsa this week to present the diocese’s fundraising proceeds to the Historic Vernon African Methodist Episcopal Church to bolster the congregation’s racial healing work and pandemic food ministry. 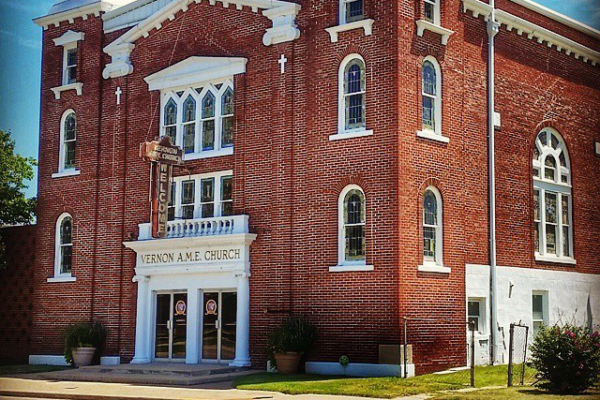 “We have been so inspired to learn more about your ministry here at Vernon, the incredible feeding ministry you have done to help people since that pandemic started, every single day feeding the hungry in your neighborhood,” Reed said to the Rev. Robert Turner, Vernon AME’s pastor, during a Jan. 26 check presentation at Turner’s church.

Reed also praised Vernon AME’s work developing a Prayer Wall for Racial Healing, which will coincide with city commemorations honoring the victims of the 1921 Tulsa massacre. As many as 300 Black residents were killed during a white mob attack on the prosperous Black neighborhood of Greenwood, also known as Black Wall Street. The city is preparing in May to mark 100 years since the massacre.

Last September, Tulsa leaders unveiled a historical marker outside Vernon AME that describes how white residents responded with violence after the arrest of a Black teenager suspected of assaulting a white woman. The attack left homes and businesses destroyed, and more than 10,000 Black residents were displaced. Police and Oklahoma National Guard arrested some of the Black survivors, but none of the white attackers was ever held accountable.

Community organizations have been raising money for the past year for a permanent memorial in Tulsa. The Equal Justice Initiative in Montgomery, Alabama, which encourages communities across the United States to publicly memorialize local victims of lynchings, is providing a monument that lists the names of those killed in the Tulsa massacre.

“A lot of people who were killed never had a proper burial,” Turner, the AME pastor, told the Tulsa World in May 2019 when plans for the memorial were unveiled. “This is really a human tragedy, and I hope the people who come to see this come with respect for the people who suffered.”

The Episcopal diocese offered to match all gifts to its latest Bishop’s Appeal up to $50,000. After donations far surpassed that goal, Reed was able to provide a check for $164,108 to Turner.

“We were inspired by this beautiful vision of this prayer wall and this place where people can come to learn about the race massacre, to pray, to seek reconciliation and healing in our world and in our city,” Reed said, in a YouTube video of the check presentation.

Some of the money will go to the Prayer Wall, while the rest will support Vernon AME’s feeding ministry and to upgrade its kitchen. The church has served an average of more than 70 meals a day since March 2020. With the pandemic still weighing heavily on the national and global economy, churches across the United States have stepped up efforts to provide food to families struggling financially.

“I know that God can make all things new, during this Advent Season I am waiting with jubilant expectancy to see what God will do through this feeding ministry and prayer wall,” Turner said in a Diocese of Oklahoma news release. “I am grateful to join Bishop Poulson in this appeal to the entire Episcopal Church in Oklahoma and beyond.”