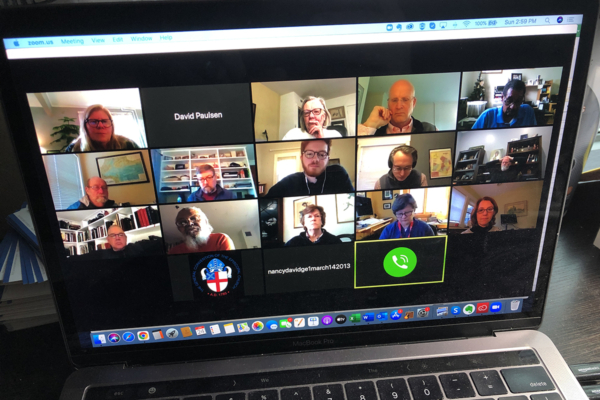 The Governance and Operations Committee meets on Zoom on Jan. 24 during the four-day gathering of The Episcopal Church’s Executive Council. Photo: David Paulsen/Episcopal News Service

[Episcopal News Service] The Episcopal Church’s Executive Council pledged to assist cash-strapped dioceses during the pandemic, committed the church to “deradicalization” efforts after the U.S. Capitol riot and received an update on a racial audit of church leadership, during a four-day meeting at which current events influenced much of the agenda.

Executive Council, the church’s governing body between meetings of General Convention, wrapped up its online meeting on Jan. 25 with a series of votes, including passage of a resolution responding to the pandemic’s economic toll. That measure did not yet endorse a specific package of financial aid, but Executive Council assured dioceses it will develop a plan and provide such relief “as soon as feasible.”

“Executive Council sees the financial strain of the pandemic on dioceses,” the resolution said. “Across the church, life and finances are hard and faithful work is exhausting. The future, financial and otherwise, is uncertain and uncharted. We witness the determined and costly efforts across our church to continue in the Way of Love.”

Churchwide leaders will meet in the coming weeks and months to finalize details of the financial relief to all dioceses. Such aid was promised partly in response to a letter this month to Executive Council from bishops of the 20 Southeast dioceses of The Episcopal Church’s Province IV.

“The current pandemic is a natural disaster of proportions never before experienced in our lifetime,” the bishops wrote in their letter. “Faithful people, congregations, and dioceses are showing great commitment and resiliency in finding ways to support local outreach and parish ministry when new obstacles arise in the communities we serve.”

Council members’ push for a separate resolution on deradicalization was fueled by the deadly Jan. 6 mob attack on the U.S. Capitol. The resolution reaffirms the church’s rejection of white supremacy, acknowledges the church’s past complicity with racist systems and expresses alarm at the recent rise in violence by hate groups driven by distortions of Christianity.

The Rev. Gay Clark Jennings, president of the House of Deputies, amplified that alarm in her opening remarks on Jan. 22. Executive Council responded on Jan. 25 by voting to ask the church’s Office of Government Relations and Office for Ecumenical and Inter-religious Relations “to develop a plan for The Episcopal Church’s holistic response to Christian nationalism and violent white supremacy.”

Executive Council also received and discussed a lengthy report produced by a task force assigned to research the relationship between The Episcopal Church and Church Pension Fund, or CPF, the separately incorporated administrator assigned by General Convention to manage clergy and lay pensions and other church-related benefits.

The church and CPF have “a common responsibility” but “distinct and separate roles,” said Ohio Bishop Mark Hollingsworth, a task force member. In presenting the report to Executive Council on Jan. 23, he affirmed that General Convention has some authority over CPF, but “our canons are not extensively clear or specific about how that is to work.”

The persistent threat of COVID-19 continues to shape much of the church’s work, including Executive Council meetings, which have been held on Zoom rather than in person since the pandemic began in March 2020. Although the 80th General Convention in Baltimore, Maryland, has been postponed a year to July 2022, Executive Council still voted at this meeting as scheduled to approve a 145-page “blue book” for General Convention that summarizes the work of various task forces, committees and other interim bodies.

“It may seem odd” to submit reports so far in advance, the Rev. Michael Barlowe, secretary of General Convention, said during Executive Council’s Jan. 24 session, but maintaining a normal submission schedule will “keep the momentum going and will effectively prepare us for a productive meeting in Baltimore.” General Convention’s legislative committees can begin reviewing those reports after the church’s presiding officers appoint committee members later this year, Barlowe said.

And Executive Council approved a resolution supporting methods of capturing and storing greenhouse gases from the atmosphere to help reduce climate change. Another approved resolution calls for formation of an ad hoc committee to study and propose a translation and interpretation policy for the church.

Other topics taken up by Executive Council included potential revisions to the church’s budgeting process. A task force recommended streamlining the process by expanding Executive Council’s role in drafting and finalizing the triennial budget proposal that is presented to General Convention for review and approval. Such a change would make it unnecessary for General Convention to maintain its Joint Standing Committee on Program, Budget and Finance.

Executive Council has 40 voting members, including the presiding bishop and House of Deputies president. Twenty of the voting members – four bishops, four priests or deacons, and 12 laypeople – are elected by General Convention to six-year terms, with half of those members elected every three years. The other 18 are elected to six-year terms by The Episcopal Church’s nine provinces, with each province sending one ordained member and one lay member.

Over this meeting’s four days, Executive Council committees welcomed updates from churchwide staff members on a range of church initiatives and programs, some of which have been affected by the pandemic and the recent change in White House administrations.

Demetrio Alvero, Episcopal Migration Ministries’ director of operations, discussed prospects for rebuilding the church’s refugee resettlement efforts under the Biden administration. The church’s Development Office outlined a successful year in fundraising, including a campaign supporting the evangelism initiative known as “Sharing the Way of Love.” And the Rev. Shannon Kelly, director of faith formation, outlined a plan to assess and discern the future of the Episcopal Youth Event, or EYE, a triennial church event that was canceled in 2020 because of the pandemic.

“Those involved in EYE desire to use this fallow time to learn, plan and design a restart that includes innovation and new models for engaging young people for discipleship in the world,” Julia Ayala Harris, chair of the Committee on Mission Within The Episcopal Church, said Jan. 25 in her committee summary.

Gathering within the rectangular confines of computer screens, Executive Council occasionally allowed space for historical and temporal asides. Jennings devoted her sermon on Jan. 24 to Florence Li Tim-Oi on her feast day. Li, ordained in 1944 in Hong Kong, was the first female priest in the Anglican Communion.

“I wish I could have met and spoken to Li Tim-Oi, this amazing woman with a courageous heart who served under extraordinary circumstances,” Jennings said.

Later that day, as the Governance and Operations Committee discussed how the pandemic will shape The Episcopal Church’s future, the Rt. Rev. Ed Konieczny, retired bishop of Oklahoma, quietly posted score updates from the concurrent NFC Championship football game in the Zoom chat for the benefit of the members.

The Tampa Bay Buccaneers won that game, and the next day, Southwest Florida Bishop Dabney Smith showed off the “Buccaneers Football” T-shirt under his sports coat before beginning his report on the work of the Committee on Mission Beyond The Episcopal Church. 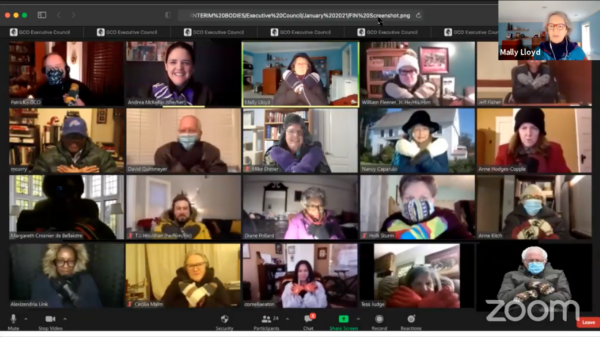 The Rev. Mally Lloyd, upper right, chair of Executive Council’s Finance Committee, concludes her Jan. 25 report with a Zoom screengrab featuring the meme of Vermont Sen. Bernie Sanders and his mittens that has gone viral since President Joe Biden’s inauguration.

Providing pandemic relief to dioceses generated extensive discussion over the Jan. 22-25 meeting, partly because members said they aren’t yet certain of the best way to provide that relief.

The Province IV bishops, in their letter to Executive Council, specifically asked churchwide leaders to exempt federal pandemic aid from the diocesan income that The Episcopal Church will count when it calculates the next round of annual assessments. Many dioceses and parishes applied for and received stimulus loans through the federal Paycheck Protection Program, or PPP, and those loans can be converted to grants if recipients meet certain conditions. The Episcopal Church also received $3 million in PPP assistance.

Executive Council did not decide at this meeting how it will treat dioceses’ PPP funds, preferring to research that question more thoroughly first, but members spoke of the need to show solidarity with local Episcopal leaders and their congregations during the upheaval caused by the pandemic.

Presiding Bishop Michael Curry suggested that pleas like the one made by the Province IV bishops are about more than church finances.

“I think what’s behind it is our dioceses for the most part have been pretty faithful through the last year,” Curry said, adding that intensified political polarization is increasing the trauma. “It’s like having a low-level fever for a year. Translate that into a church where clergy are beginning to get anxious about, what will our income be going forward, being anxious about, what is attendance going to be. … There’s a cry for, ‘Can somebody help us just a little bit?’”

Executive Council did not set a deadline for developing its relief plan, but members expressed a sense of urgency. The next meeting of the full body is tentatively scheduled for April, though officials could act sooner, once details are finalized. Any potential aid would build on the $1 million in relief that Executive Council pledged to struggling dioceses at its October meeting through its assessment waiver process.

Executive Council members at this meeting also got their first look at a report from a racial justice audit of Episcopal leadership at all levels, conducted by the Massachusetts-based Mission Institute. The report, though not yet released to the full church, is being shared with church leadership groups, including Executive Council, as part of a monthslong rollout that is expected to continue through this year.

The audit, called for by a 2015 General Convention resolution, entailed survey questions and one-on-one interviews to assess the diversity and racial awareness of leadership across The Episcopal Church and to help the church foster a culture of welcome. Five leadership groups participated: House of Bishops, House of Deputies, Executive Council, churchwide staff and leaders from more than two dozen dioceses.

“The question we were asking is, who comprises the leadership of The Episcopal Church, and what is their experience of race and racism in their leadership roles?” Liz Magill of the Mission Institute said Jan. 22 in her 20-minute presentation to Executive Council’s Committee on Mission Within The Episcopal Church.

Magill said the research team identified nine patterns from the survey responses and interviews, including examples of Episcopalians of color feeling both invisible and “hypervisible,” views on how power is leveraged in the church, concerns about the political polarization of anti-racism work, struggles with how spirituality is affected by racism, and contrasts between calls for systemic change and a narrower focus on improving diversity of representation. ENS was not provided a copy of the report.

The Rev. Stephanie Spellers, the presiding bishop’s canon for evangelism, reconciliation and stewardship of creation, told Episcopal News Service that the report will first be shared in the coming months with the groups that participated in the survey.

“The Racial Justice Audit of Episcopal Church Leadership has yielded a treasure trove of information about race, power and leadership in our church,” Spellers told ENS by email. “There are reams of numbers and stories, and this report – rich as it is – only begins the process. It will take real time for the whole church to dig into it, learn from it, reflect on it and decide what and how we and our institutions will change as a result.”