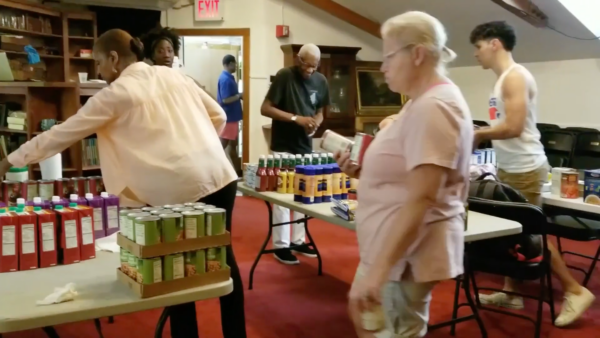 [Episcopal News Service] The sharp economic downturn in the United States during the coronavirus pandemic has hit the performing arts industry particularly hard. Nationwide, more than half of all actors and dancers and more than a quarter of all musicians were out of work as of fall 2020, according to the National Endowment for the Arts.

In New York, where Broadway theaters have been closed since March and may not reopen for months, some struggling artists have received much needed support from the Episcopal Actors’ Guild, a small but dedicated charity that has been serving the performing arts community for nearly a century.

The organization, based on the second floor of Manhattan’s Church of the Transfiguration, is best known for its food pantry and for the annual grants it awards to actors and other performers to help them pay their bills. The pandemic has increased the demand for both services. “We’ve been doing our part just to get people some financial relief and to get some food on their table,” Karen Lehman Foster, the Episcopal Actors’ Guild executive director, told Episcopal News Service.

The number of people applying for grants increased fourfold early in the pandemic, she said, and the number receiving food has grown steadily, from about 50 a month before the pandemic to up to 150 a month recently. Much of the organization’s food distribution has shifted from in-person grocery pickups to store gift cards and online orders, to minimize the need for personal contact. “Each month, we are spending more in that area because it seems to be the biggest need,” Lehman Foster said.

The Episcopal Actors’ Guild is an ecumenical ministry open to performing artists of all faiths – or no faith – though it is deeply rooted in the history of Church of the Transfiguration, which is known fondly as the “little church around the corner.” The congregation founded the Episcopal Actors’ Guild in 1923 and still supports the organization, both by providing office and gathering space for free and by collecting food and monetary donations from parishioners.

Van Dooren noted that there is a plaque on one of the church’s pews honoring the Oscar-winning stage and film actor Rex Harrison, who once was a lay reader at the church. Mary Pickford and Douglas Fairbanks were early leaders of the Episcopal Actors’ Guild. The legendary dancer and actor Fred Astaire, who was confirmed at Church of the Transfiguration, regularly donated to the Episcopal Actors’ Guild in gratitude for supporting him as a young man, van Dooren said.

The church’s stained-glass windows also spotlight the Episcopal congregation’s connection to the arts community, with images of saints alternating with panes depicting actors. Today, the church keeps a collection bin in the back of the church for donations to the Episcopal Actors’ Guild food pantry. “We assist them whenever we can,” van Dooren said.

The guild offers $750 grants once a year to residents of New York, where the cost of living is among the highest in the country. Recipients are limited to those who have been performing for at least five years and have a compelling need for assistance, such as a sudden job loss. Performers with disabilities and seniors can qualify for $1,000 grants. Those who qualify also can receive groceries from the Episcopal Actors’ Guild food pantry every two weeks.

That kind of assistance is much appreciated by actors like Sandro Isaack, who first learned of the guild in 2017, when his career was temporarily sidelined by a surgery that wasn’t covered by his insurance.

“The Episcopal Actors’ Guild paid for a large part of my surgery,” said Isaack, a 47-year-old Brazil native. He told ENS he also was able to receive food from the organization’s pantry.

Before the pandemic disrupted in-person services, the Episcopal Actors’ Guild hosted workshops and offered professional development opportunities to performing artists. After his recovery from surgery, Isaack volunteered to help lead some of those workshops, drawing on his more than 30 years of experience in theater and TV productions.

“One hand reaching out makes you want to reach out your hand to someone in need,” Isaack said.

The performing arts industry is cyclical and unpredictable even in normal times, Lehman Foster, the guild’s executive director, said. “It’s a great industry, but it’s not very stable,” she said. “Shows open and shows close and TV shoots get canceled, so people are sort of left high and dry, sometimes somewhat unexpectedly.”

The Episcopal Actors’ Guild receives most of its financial backing from foundation grants, though it also raises money through benefit events, such as the Christmas show it organized online in December with the House of the Redeemer, another Episcopal-affiliated charity. The event, which included performances by Broadway singers, raised about $2,500, Lehman Foster said.

Lehman Foster is trained as an actor and has a degree in social services. When she began working for the Episcopal Actors’ Guild in 2006, it “seemed to be a good mix” of her two professional passions – theater and the nonprofit sector. She was promoted to executive director two years later, and though raised Roman Catholic, she and her family have grown close to the congregation at Transfiguration. She and her husband were married in the church, and they baptized their daughter there.

The Episcopal Actors’ Guild doesn’t proselytize through its ministry, but performance can be a spiritual practice, Lehman Foster said, even for those who aren’t religious. “I think when people perform, that is a divinely inspired thing,” she said. “A lot of performers talk about the spirit moving through them.”

With the increased demand for the organization’s services during the pandemic, Lehman Foster estimated that the guild has served food to more than 600 people in the past year and given out about 300 grants.

“When we think about it, it really is devastating what is happening in the performing arts community,” she said, “but we’re really glad that we’re able to be here to help people.”