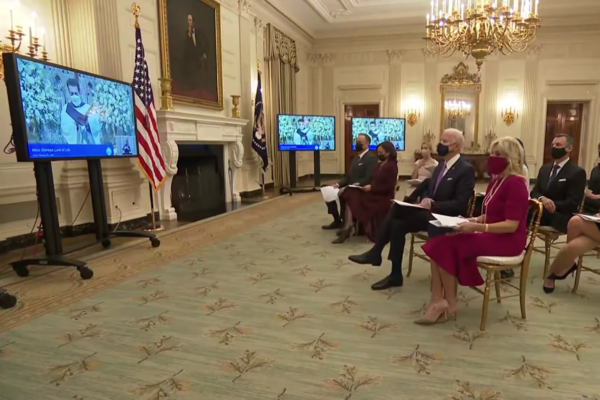 [Episcopal News Service] Washington National Cathedral on Jan. 21 resumed its tradition of, every four years, hosting an interfaith prayer service the day after the presidential inauguration, but this time the thousands of people who attended followed along from the comfort of their homes.

The National Prayer Service, conducted by livestream rather than in person because of the coronavirus pandemic, marked the first full day in office of President Joe Biden and Vice President Kamala Harris, who took their oaths Jan. 20 outside the U.S. Capitol. The tradition of an interfaith prayer service predates the cathedral and started with the first inauguration, of President George Washington. This year, though, Biden and Harris weren’t at the cathedral but were watching from the White House.

“We welcome President Biden and his family, Vice President Harris and her family, and all who seek the common good for United States of America and for the world, as we mark once again the transition of political leadership and look toward the future with resolve and hope,” Washington Bishop Mariann Budde said in her opening remarks.

Budde, National Cathedral Dean Randy Hollerith and other cathedral clergy appeared on the livestream from inside the cathedral, while other participants spoke on videos recorded remotely. Viewers of the livestream on YouTube numbered in the thousands throughout the hourlong service, reaching about 8,000 at one point.

The service was part of the official schedule of inauguration festivities overseen by the Biden Inaugural Committee. Incoming presidents also traditionally have attended private pre-inaugural services at St. John’s Episcopal Church in Lafayette Square, across from the White House, though Biden instead chose to attend a Roman Catholic Mass on Jan. 20. As the nation’s second Catholic president, after President John F. Kennedy, Biden invited congressional leaders from both parties to join him for the service at the Cathedral of St. Matthew the Apostle in downtown Washington.

For the National Prayer Service on Jan. 21, St. John’s rector, the Rev. Rob Fisher, was included among a lineup of speakers that reflected the broad diversity of America’s faith traditions: Among them were Jewish rabbis from New York and California; a Muslim imam from Texas; the Navajo Nation president in Arizona; Roman Catholic nuns from Maryland and Texas; Sikh, Hindu and Mormon leaders; and numerous Protestants from across the country, including a Presbyterian pastor from Biden’s home state of Delaware. Languages spoken by participants included English, Hebrew, Navajo, Arabic, Spanish and Punjabi.

Musical highlights ranged from Patti LaBelle belting out “The Star-Spangled Banner” to a hushed performance of “Most Glorious Lord of Life” by the Washington National Cathedral choir. Cutting away briefly from the choir, the livestream showed Biden, Harris and their spouses watching the service on TV screens set up in a room at the White House.

Each member of the cathedral choir wore a mask and stood several feet apart, a reminder that COVID-19 continues to spread at alarming rates across the country. Along with the Lord’s Prayer and the Prayer of St. Francis – “make us instruments of your peace” – the prayers recited by participants in the service included one for victims of COVID-19, which has killed more than 400,000 people in the United States.

The service’s three scripture readings were selected from the Old Testament and the Quran. Bishop William Barber II, a Disciples of Christ pastor and co-chair of the Poor People’s Campaign, preached by video for a little more than 10 minutes, invoking the morning’s reading from Isaiah. 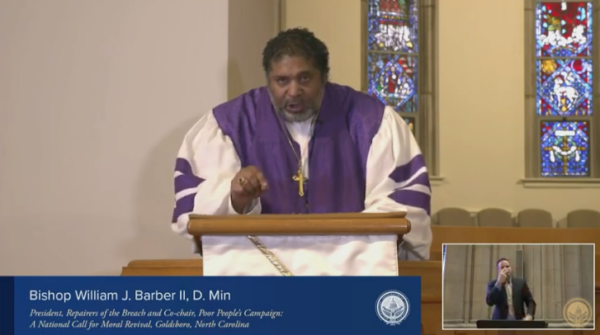 “We are in a jam today. Trouble is real, and whether we like it or not, we are in this mess together as a nation,” Barber said. “When this word of the Lord came to Isaiah, his people were also in a jam. Bad leadership, greed and injustice and lies had led them into trouble, exile and economic hardship. … God said to the prophet, ‘Sound the trumpet. Tell the nation of its sin.’”

Drawing inspiration from the words of several famous Americans, from President Franklin D. Roosevelt and the Rev. Martin Luther King Jr. to Aretha Franklin, Barber called on Americans to help “repair the breach” in the country after a divisive election and the Jan. 6 riot at the U.S. Capitol. But Barber, founder of the social justice organization Repairers of the Breach, cautioned that true healing is not be possible without first addressing entrenched inequality and injustice.

“God, grant us wisdom and courage for the facing of this hour,” Barber said, a refrain he repeated several times. “This moment in our union is not about left or right or centrist. It should not be about Republicans or Democrats,” he said. “If we the people, with God’s help, repair the breach, revival and renewal will come.”

The service concluded with a performance of “America the Beautiful” by Josh Groban and a blessing by The Episcopal Church’s Presiding Bishop Michael Curry.

“Go forth into the world in peace,” Curry said. “Be strong and of good courage. Hold fast to that which is good. Render to no one evil for evil, but love the Lord your God, love your neighbor, love yourself.”