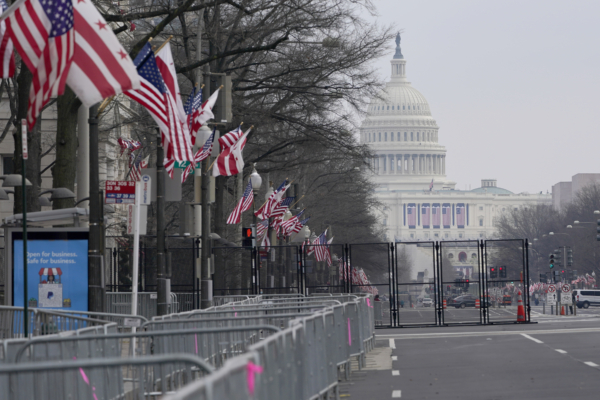 A view down Pennsylvania Avenue shows the security fencing around the United States Capitol in Washington, D.C., on Jan. 15, 2021, ahead of the inauguration of President-elect Joe Biden and Vice President-elect Kamala Harris. Photo: Susan Walsh/AP

[Episcopal News Service] As Americans ready themselves to welcome their 46th president, Episcopalians are invited to participate in a variety of virtual inaugural and Martin Luther King Jr. Day events.

Washington National Cathedral is expected to host an inaugural prayer service on Jan. 21, as is traditional. While previous presidential inaugurations have included packed, festive services at the cathedral, the format – like the rest of the inaugural events – is expected to be scaled back and to include virtual elements. More details will be available in the coming days at cathedral.org.

The inaugural prayer services highlight the role that people of faith play in a democratic society, and Episcopalians have many opportunities to continue reflecting and acting on that responsibility in the coming days and weeks, said the Rev. Charles Robertson, canon to the presiding bishop for ministry beyond The Episcopal Church.

“From the beginnings of our country, while we have had a separation of church and state, faith communities have been integral in working with governments on any number of projects and programs,” Robertson told Episcopal News Service. “And The Episcopal Church in particular, from the start, has taken seriously our responsibility to do what we can. And never is that more important than in a time of transition.”

Presiding Bishop Michael Curry will participate in a virtual prayer vigil on Tuesday, Jan. 19, 7-8 p.m. organized by Sojourners. The vigil, on the theme of “Peace With Justice,” will include a range of ecumenical Christian voices. Check sojo.net for more information in the coming days.

President-elect Joe Biden’s inaugural committee and leaders in Washington are asking Americans to stay home and limit gatherings. The Presidential Inaugural Committee will host a lighting ceremony at the Lincoln Memorial Reflecting Pool at 5:30 p.m. on Jan. 19 in memory of the nearly 400,000 Americans who have died of COVID-19. The committee also invites cities and towns around the country to light buildings and ring church bells at the same time “in a national moment of unity and remembrance.”

The church’s Office of Government Relations has compiled a list of resources for virtual prayer and participation in the days around the inauguration, which include Martin Luther King Jr. Day on Jan. 18. There is also a list of inauguration-related virtual events here.

Washington National Cathedral and its interfaith partners will continue to offer daily prayers for the country until Inauguration Day, livestreamed at 5 p.m. on its YouTube channel. This Sunday, Jan. 17, at 4:30 p.m., the cathedral will host a webinar on the history and cultural and religious significance of the inaugural address, a long-standing American tradition. Congregation member Claire Jerry, a curator of political history at the National Museum of American History, will present the session.

On Jan. 15, the National Council of Churches (of which The Episcopal Church is a member) hosted a noon virtual interfaith prayer service of reflection, lament and hope in support of all who work at and protect the United States Capitol. The prayer service was organized “to bear witness to the trauma and destruction caused by the attack on the Capitol on Jan. 6, 2021, and, through compassionate interfaith sharing and mutual support, to bring comfort and hope to all who work at the Capitol complex,” according to the NCC.

Episcopal Church Racial Justice and Creation Care staff members will join in a prayer vigil with national leaders of the Poor People’s Campaign on Jan. 17 at 8 p.m. on the theme of “Prayer for the Beloved Community in a Time of COVID and Chaos.” The church will also participate in the Poor People’s Campaign’s “National Interfaith Service of Love, Light and Leadership” in observance of Martin Luther King Jr. Day on Jan. 18 at 1 p.m. Both services will be livestreamed here.

The Episcopal Church’s support of the Poor People’s Campaign hasn’t wavered since the ecumenical initiative was launched in 2018 to rally Americans behind the moral cause of fighting poverty – 50 years after King made an appeal for economic security in the original Poor People’s Campaign.

In honor of King’s legacy, the seven bishops representing the six Episcopal dioceses in California called on Americans to embrace nonviolent words and actions.

“This weekend, when we remember the legacy of Dr. Martin Luther King Jr., we call upon the leaders of our cities, states and country to stand firmly in the place of nonviolence, truth-telling and mutual respect,” the bishops wrote.

“To lead from the place of nonviolence is not passive acceptance of wrongdoing; it is an active call to summon the ‘better angels of our nature’ (Abraham Lincoln, 1861). We know of the difficulty Dr. Martin Luther King Jr. faced, even among his own followers, as they resisted hatred and physical violence with prayer, song and marches for justice. We call on all people to embrace words and actions that are nonviolent.”

On Jan. 15, Bishops United Against Gun Violence, a network of more than 100 Episcopal bishops, released a statement about last week’s attack on the U.S. Capitol and the threat of additional violence next week tied to Biden’s inauguration on Jan. 20.

“Last week, those of us in the United States watched in horror as a violent insurrection put both our government and its leaders in peril. This week, our nation sits on edge, waiting to learn if extremists will make good on threats to mount armed protests at all 50 state capitol buildings and in Washington, D.C., between now and Inauguration Day,” they wrote. “The epidemic of gun violence in our country now threatens not just individual Americans, but also our democracy.”

Earlier in the week, a group of Episcopal bishops led by Michigan Bishop Bonnie Perry urged Episcopalians not to participate in any protests or counterprotests surrounding the inauguration, for fear of violent confrontations.

Perry also said that “staying home does not mean staying silent,” and encouraged Episcopalians to stay engaged by signing up for Episcopal Public Policy Network alerts or perhaps donating to a local food bank.

The Very Rev. Kevin Carroll, dean of All Saints’ Cathedral, invites people of all faiths to join together in prayer during this time of transition in our nation. “Regardless of one’s political beliefs,” Carroll said, “I believe that all Christians of good conscience can agree that our country, which is so divided, can begin the process of reconciliation and unity, beginning with prayer for our nation and for each other.”

Other diocesan events include a brief Zoom prayer service at 8 a.m. Jan. 20, led by the bishops of New York.

“As Christians and citizens, we will all play different parts in the days to come, but at all times we are called to a practice of fervent prayer,” Bishop Andrew Dietsche wrote to his diocese. “We invite all across our diocese to tune in and pray with us, that we may be, across our differences, one people before God, raising one prayer together for the safety and well-being of our nation and peoples.”

Vermont Bishop Shannon MacVean-Brown and the Green Mountain Online Abbey will host a vigil for peace from 1 to 6 p.m. Jan. 17.

Looking beyond Inauguration Day as the Biden administration gets to work, Episcopalians are encouraged to sign up for alerts from the Episcopal Public Policy Network to take action on issues like voting rights and immigration, which continue to threaten justice and dignity in America.

“Whatever administration is in power, our work, our values, our priorities continue,” Robertson said. While the inauguration is a momentous occasion, he added, “our work is not done.”

“I think more important is the work that we’re already engaged in looking beyond” the inauguration, he told ENS, pointing to the church’s work on immigration and welcoming refugees. “It’s almost like a wedding. A wedding is a wonderful thing, but it’s important to think about what steps need to be taken for the marriage as a whole. And so, as I look at the work that our church is doing in various quarters in conversations with the new administration, I’m encouraged that there is much work that we can do as we move forward.”