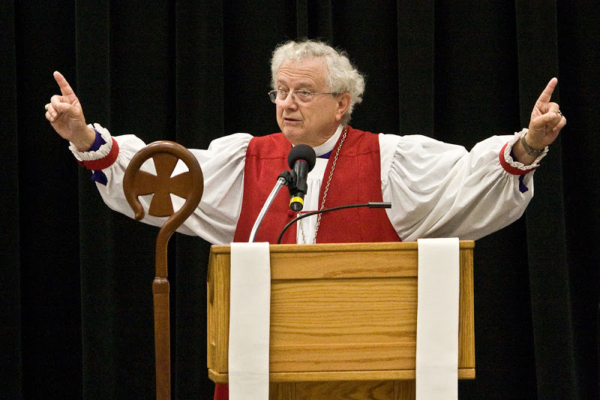 Louttit was born in West Palm Beach, Florida, on June 13, 1938, son of Bishop and Mrs. H. I. Louttit Sr. Married in 1962, he and his wife Jan had three children: Amy, Susan and Katie. His undergraduate degree is from The University of the South and he graduated from Virginia Theological Seminary in 1963. He was ordained a deacon by his father, then bishop of South Florida, and a priest the following year by Bishop Albert R. Stuart, then bishop of Georgia. He served Trinity Church, Statesboro, and in 1967 became rector of Christ Church, Valdosta, where he remained until election as bishop in 1994. He was consecrated bishop on Jan. 21, 1995, in the Roman Catholic Cathedral of St. John the Baptist, Savannah.

The bishop promoted congregational development and planted new congregations: Holy Comforter was established from St. Paul’s, Augusta, in Evans County; King of Peace was planted in Kingsland; and St. Luke’s was started in Rincon.
Bishop Louttit strove to keep the diocese united during a period of great controversy following the ordination of Bishop Gene Robinson in New Hampshire.
In order that congregations that could not support a full-time priest would have the Eucharist every Sunday, Louttit initiated the training and formation of local people for ordination as priests and bivocational priests. He also named the goal of at least one deacon in every congregation and ordained many people to that order of ministry. He supported Cursillo and Happening and regularly led summer camp sessions, offering the music camp for many years as priest and bishop.
Louttit called for the election of a successor in February 2009. He retired on the consecration of the tenth bishop of Georgia on January 23, 2010.
In his first address as bishop to diocesan convention, Louttit stated he believed the ministry of the bishop to be: an encourager, friend and prayer supporter; the link between congregations in our diocese, throughout the world and back through time to the apostles; the chief administrator, planner and visioner; troubleshooter and reconciler; the sharer of family stories, like the grandfather of the family; an iconic model of Christian service.
Current Bishop Frank Logue said, “He lived into that vision well, creating a stronger diocesan community in the process. With a pastor’s heart, he left us more connected, a closer community with its eyes on Jesus.”
Logue added, “Personally, he saw more in me than was present when he saw it, and I am not alone in experiencing this. He offered me the opportunity to plant a church when the safe bet was that it wouldn’t work and then supported me fully.”
Louttit’s successor, Bishop Scott Benhase, recalls, “One of my fondest times with Bishop Louttit was completely serendipitous. I had no liturgical responsibilities on Ash Wednesday one year, so Kelly and I headed to St George’s Savannah for the evening liturgy. There also, to our surprise, were Henry and Jan. The four of us broke our fast together at a little Thai restaurant nearby after the liturgy. We had the best time with the best company.”

Bishop Benhase added, “Episcopal transitions are never easy for anyone, but Henry was so humble and open and that made it so much easier. His love for God was apparent to anyone who spent time with him.”

Please join in prayer for Jan, for their daughters Amy, Susan and Katie and the whole Louttit Family. The family asks that in lieu of flowers, donations go to our Honey Creek Retreat Center. Donations may be made by texting “HoneyCreek” to 73256 or via check sent to 299 Episcopal Conference Center Road, Waverly, GA 31565.