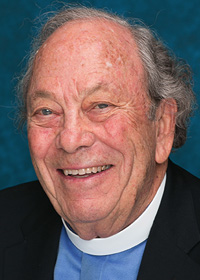 [Diocese of Los Angeles] The Rev. George F. Regas – whose bold leadership advanced civil rights, women’s ordination, LGBTQ marriage equality and reversing the arms race – died Jan. 3 in Pasadena, California, where he was rector of All Saints Episcopal Church from 1967 to 1995. He was 90.

Mary, his wife of nearly 44 years, and her son Lowry Smith were at Regas’ side when he died peacefully at their Pasadena home. He was receiving hospice care after a brief hospitalization due to an infection that was not the coronavirus. Regas is also survived by his daughter Susan Regas, his sons Tim and Tyler, Mary’s son Burke Smith and their families. Regas’ daughter Michelle Regas Worrel died in 2002.

Current plans are to offer a celebration of life in Regas’ memory after pandemic restrictions are lifted.

The Rt. Rev. John Harvey Taylor, bishop of the six-county Diocese of Los Angeles, said of Regas: “One of George’s longtime colleagues put it best when she told me that on Sunday morning, he’d be in the pulpit at All Saints, raising the roof for peace in Vietnam and Iraq and equity for women and LGBTQ people. Then on Sunday afternoon, you’d see him at Huntington Hospital, reading psalms at the bedside of a seemingly unconscious patient in the ICU.

“As prophet and pastor, he was the complete priest. His exuberance and joy made his faith contagious, building up the church and making it better. We’ll miss our colleague terribly and grieve for Mary and their family. And yet we’ll always have him with us.”

“Help us, O Lord, to be masters of ourselves so that we may become the servants of others,” Regas regularly began his resounding sermons that filled All Saints’ 1924 Gothic sanctuary with calls for God’s love in action. His notable 1971 sermon “Mr. President, the Jury Is In!” sought an end to the Vietnam War, and his sermons in the early 1990s paved the way for the parish’s first blessing of a same-gender union, that of parishioners Mark Benson and Philip Straw, in 1992.

In 1995, around the time of his retirement as All Saints’ rector, Regas reflected on his role as House of Deputies floor manager when the 1976 General Convention authorized women’s ordination. Undaunted by a recent hospitalization for phlebitis, Regas worked from a wheelchair, building a coalition that he traced back to his experience in Los Angeles in 1971, when the diocesan convention resoundingly rejected a resolution calling for the ordination of both women and men. The only priest of the diocese who joined three laywomen to speak in favor of the measure, Regas exhorted the convention toward equity and went on to serve as chair of the diocese’s Commission on Ministry, active in that role from 1973 to 1980.