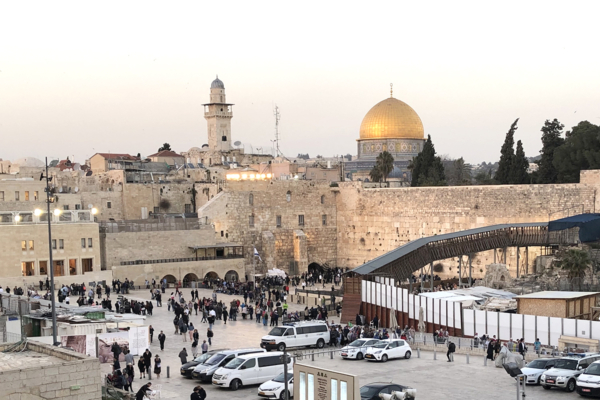 The Holy Land pilgrimage app created by St. Martin’s-in-the-Fields Episcopal Church in Columbia, South Carolina, allows users to follow the Gospel story in and around Jerusalem without ever having to set foot outside their neighborhoods. Photo: David Paulsen/Episcopal News Service

[Episcopal News Service] Hundreds of Episcopalians this Advent have embarked on a walking pilgrimage around the Holy Land without ever having to set foot outside their neighborhoods. There’s an app for that, built by St. Martin’s-in-the-Fields Episcopal Church in Columbia, South Carolina.

The church’s smartphone app, which launched on Nov. 29, allows users to trace a virtual 97-mile path through and around Jerusalem that follows the story of the Gospel of Luke. As with a fitness tracker, the app logs your mileage whenever you walk – wherever you are in the world – and the app’s map shows equivalent distances covered in the Holy Land, divided into six segments.

It isn’t exactly a substitute for an actual Holy Land pilgrimage, like the one that St. Martin’s-in-the-Fields clergy leaders had hoped to plan with their congregation. But with the coronavirus pandemic curbing international travel, this digital alternative has been widely embraced by phone-based pilgrims interested in learning about the land where Jesus once walked.

Interested in joining the pilgrimage? Download the app to your smartphone on the Apple App Store or Google Play.

“It’s hard to know the stories, to be able to really go deep into the stories of the Gospel, without seeing the places where they happened,” the Rev. Susan Prinz, associate rector, told Episcopal News Service.

Prinz hatched the idea for the app in October with the Rev. Caitlyn Darnell, a deacon who serves as the church’s director of formation and mission. To build it, they hired the Rev. Greg Johnston, rector of St. John’s Episcopal Church in Boston, Massachusetts, who had previous experience in developing faith-based apps.

For much of the fall, Prinz and Darnell worked with the Rev. Mitch Smith, rector of St. Martin’s-in-the-Fields, to create videos and other content that Johnston could use to flesh out the app. They also enlisted Episcopal and Anglican colleagues from around the world to contribute, including Jerusalem Bishop Coadjutor Hosam Naoum, who recorded a video welcome.

Prinz and Naoum knew each other from studying together at Virginia Theological Seminary, and Prinz had traveled to Israel twice, in 2012 and 2016. Those trips “made me see Jesus in a deeper way and experience his life in a way unlike anything I’d ever experienced before,” Prinz said. She approached the app with those experiences in mind.

Darnell hasn’t been to Israel, but in 2019, she joined a group organized by The Episcopal Church’s United Thank Offering that walked part of the Camino de Santiago de Compostela in Spain. Like the Camino, the virtual Holy Land pilgrimage can be completed at a pace of the pilgrim’s choosing. “You can start the pilgrimage at any time, and you walk it until you’re finished,” Darnell told ENS. 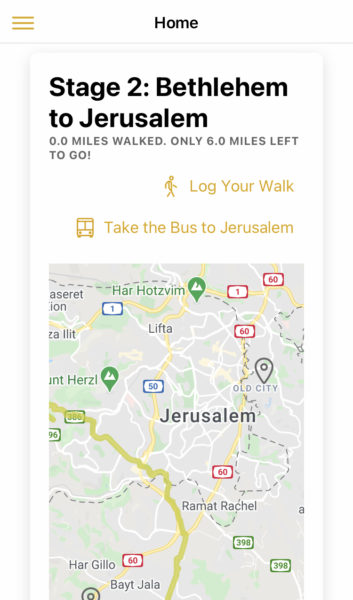 The virtual pilgrimage app logs walking miles on an equivalent route around the Holy Land, or users can unlock content by completing devotional tasks for points.

Participation has expanded well beyond St. Martin’s-in-the-Fields. Through word of mouth and some online promotion, about 500 people registered in advance and received the church’s printed pilgrimage guidebook by mail. Some congregations around the United States joined St. Martin’s-in-the-Fields in taking up the app as their Advent activity, and Darnell said the virtual pilgrimage has attracted pilgrims from as far away as the Philippines.

The app tracks mileage using health trackers on users’ phones. Along the way, virtual pilgrims can learn about holy sites and landmarks by “unlocking” content produced and curated by the staff of St. Martin’s-in-the-Fields. They also get to know the various characters in the Gospel story.

Stage 1, for example, entails nine miles of walking, to cover the equivalent distance from Ain Kareem to Bethlehem. After the first mile, walkers can read Prinz’s post about Elizabeth and Zechariah. Another two miles unlocks a video by Darnell about the Annunciation. The holy sites and landmarks highlighted by the app mirror those that drew a million Christian pilgrims to Israel in 2019. But like actual Holy Land pilgrims, the app’s virtual pilgrims are more than tourists.

Darnell added that this pilgrimage can be completed even by people who can’t or choose not to walk the miles. They have the option of advancing to the destinations by completing devotional tasks to earn points, such as praying the Daily Office, doing an act of charity or meditating in silence for 15 minutes.

This Advent app ends with Jesus’ Transfiguration, thought to have occurred on Mount Tabor. Creating and soliciting more than 50 pieces of content for that app kept St. Martin’s-in-the-Fields leaders busy for about a month and a half, and they already are considering options for a second virtual pilgrimage for Lent, possibly following the Via Dolorosa in Jerusalem, Jesus’ final path to the crucifixion. The app also can be used to host other types of pilgrimages, such as a tour of local landmarks of the civil rights movement.

St. Martin’s-in-the-Fields has welcomed widespread usage of the app for anyone interested in joining the congregation’s Holy Land pilgrimage, and congregations are invited to build their own virtual pilgrimages using the app, if they decide they have the vision, ambition and staff needed to give it a try.

“From the beginning, we said we’re offering this for the whole church. We want absolutely everybody to be a part of this with us,” Darnell said. “We’re all trying to make pandemic ministry work.”