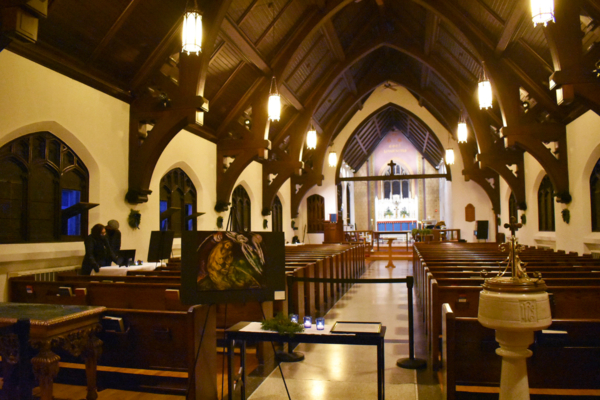 St. Mark’s Episcopal Church in Milwaukee, Wisconsin, welcomes parishioners to weekly walk-through Communion this Advent. Each Sunday, they are invited to walk around the nave, stopping at devotional art stations, before picking up Communion kits from a table to the right of the altar. Photo: David Paulsen/Episcopal News Service

[Episcopal News Service] Some Episcopal congregations that had spent most of the year fasting from Communion because of the pandemic have gotten creative in the fall and during Advent so they could resume this bedrock Episcopal liturgical and sacramental practice.

In Milwaukee, Wisconsin, diocesan restrictions have prevented parishioners of St. Mark’s Episcopal Church from worshipping in the church building since March, but the congregation ended its Eucharistic fast on the first Sunday of Advent, when it started a weekly walk-through Communion. Milwaukee Bishop Steven Miller has granted case-by-case permission to congregations wishing to distribute Communion. 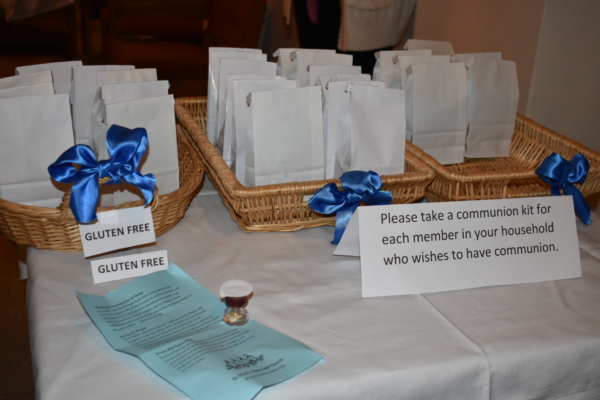 On Sunday evenings during Advent, the Rev. Ian Burch, St. Mark’s rector, consecrates take-home Communion kits during a brief service of Holy Eucharist, celebrated with just a few church volunteers. Then from 4 to 7 p.m., he greets parishioners at the front door and directs them to a path threading around the nave past prayer stations and devotional artworks. Before leaving the church, they stop at the right of the altar where a table is set up to hold the kits.

“It is not normal,” Sandy Boltz, 81, said after picking up her Communion on Dec. 6. She was glad to be back in the church, even briefly. “The loss of the whole Sunday, that we can’t come to church” has been difficult for her and other parishioners, Boltz said, more so than their fast from Communion.

“It’s definitely missed,” Marian Byers, an altar guild member, told Episcopal News Service through a mask as she volunteered at the Communion table.

The Holy Eucharist liturgy is identified by the Book of Common Prayer as “the principal act of Christian worship” each Sunday. But when the pandemic forced widespread suspension of in-person worship services in March, many Episcopalians had no way to receive the bread and wine that the prayer book describes as their “spiritual food.”

Presiding Bishop Michael Curry issued a message to the church on March 31 endorsing a temporary fast from in-person worship and Communion as “an act of love for God and our neighbor.” After the pandemic’s initial surge crested, dioceses and congregations faced the challenge of how to share Communion again without fueling the virus’ spread.

Some congregations, after choosing to forgo Communion for most of the pandemic due to the public health risks, have begun experimenting with a return to the practice. 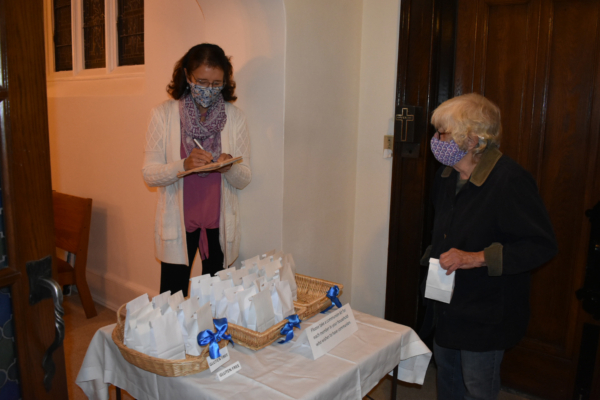 Dozens have attended the walk-through Communion at St. Mark’s, Burch said, though receiving the bread and wine hasn’t been a driving concern in the congregation. “The Eucharist is so tied to the music, companionship, the general warmth of the place,” Burch said. Even if he didn’t offer Communion, he thinks parishioners would come just to step foot in the church again and say hello.

The Rev. David Cox, rector of St. Michael and All Angels Episcopal Church in Mission, Kansas, a Kansas City suburb, felt parishioners’ longing for Communion after worshipping only online for months this year. But in assessing the congregation’s options for returning to in-person services, he knew that even some parishioners who wanted Communion wouldn’t feel safe attending church in person.

“I was concerned … about creating two different classes of people, those who could come into church and get Communion and those who couldn’t,” Cox said in an interview with ENS.

The church’s pre-pandemic services drew more than 250 people each Sunday. After seven months of the pandemic, many broke their fast from Communion on Oct. 11, when St. Michael and All Angels hosted a parking lot service. About 100 people attended, and turnout was similar at indoor services on Nov. 1 and 8. The in-person services ended when COVID-19 cases surged in the state through November and December.

“I think when you ask people, what they miss the most is the community,” Cox said.

The Christian practice of sharing Communion bread and wine is rooted in the Gospels. Jesus taught his disciples to re-create his Last Supper so they would continue to feel his healing presence after his death, resurrection and ascension. According to Episcopal doctrine, Christ’s body and blood are “really present” in the consecrated bread and wine received by faith.

Holy Eucharist, though central to Episcopal liturgical practice, isn’t the only way Episcopalians worship and connect with God. “One of the things that I think this time has kind of allowed us is almost a reclaiming of the breadth of our heritage,” said the Rev. Andrew Wright, canon to the ordinary of the Diocese of Newark.

Holy Eucharist wasn’t always so central. Wright noted in an interview with ENS that revisions to the prayer book in 1979 have nurtured Episcopalians’ dedication to that service and sacrament. “That’s a good thing,” Wright said, but pandemic restrictions have led Episcopalians to “broaden our vocabulary” of worship to include Daily Office liturgies, such as Morning Prayer.

Newark Bishop Carlye Hughes chose to abstain from Communion during the pandemic, in solidarity with congregations in her diocese that were not celebrating Holy Eucharist in person. She and other diocesan leaders, though, wanted to help those congregations break their fast from Communion, even if just for one day.

The diocese used the Book of Common Prayer’s liturgy for Communion under Special Circumstances as its starting point. It worked with local church leaders to coordinate Communion on Nov. 8 for members of about 100 congregations in northern New Jersey. That Sunday, even congregations that hadn’t shared Communion since March made plans to distribute consecrated wafers. Some set up outdoor stations, and the diocese temporarily lifted its restrictions on distribution to people’s homes.

The diocese may launch similar efforts in the spring. The idea is to affirm Communion’s importance in connecting Christians to Christ and to each other, Wright said. “It’s transformative. There’s good reason why people want that.”

The fall surge in COVID-19 cases has prompted congregations again to take a more cautious approach. More and more dioceses are suspending in-person worship at least through Advent and Christmas.

In Kansas, Cox is preparing St. Michael and All Angels for a unique Christmas Eve offering. Parishioners will be invited to park outside the church and tune their radios to the service of Holy Eucharist, which will be broadcast on a personalized frequency by using an FM radio transmitter that the church purchased for little more than $100.

After consecrating the Communion bread, Cox will bring it outside and distribute it to worshippers in the parking lot. It may not be ideal, Cox said, but it is as close as his parishioners will get to experiencing a traditional Christmas Eve Eucharist this year.