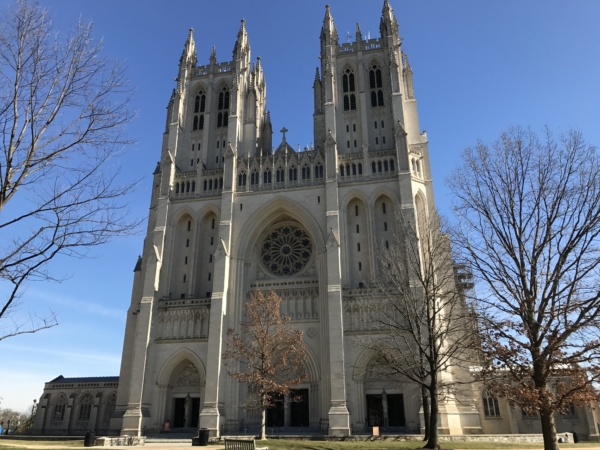 [Episcopal News Service] Washington National Cathedral on Dec. 15 tolled its bell 300 times, once for every 1,000 people who have died from COVID-19 in the United States, as another grim milestone in the pandemic coincided this week with the promise of hope offered by a vaccine.

American deaths have now topped 300,000, and over 16 million cases have been reported in the United States. Worldwide cases have passed 71 million, including 1.6 million deaths, according to the World Health Organization.

“The climbing death toll from this pandemic seems disturbingly routine. How awful that is,” National Cathedral Dean Randy Hollerith said in a written statement.

“The Christian faith teaches that each person is a beloved child of God, and that my well-being is deeply connected to your well-being. We are not lone individuals free from responsibility; rather, we are dependent upon one another for our very lives and commanded to love our neighbors as ourselves.”

The cathedral, located in the nation’s capital, tolls its 12-ton bell for every funeral held there, and it tolled the bell 200 times on Sept. 20 after COVID-19 deaths in the United States reached 200,000.

The first shipments of a vaccine developed by Pfizer were distributed nationwide early this week, with front-line health care workers receiving some of the first vaccinations. Another vaccine developed by Moderna is expected to receive federal emergency authorization this week. The initial round of vaccinations has been cheered around the country, though it still could be months before doses are distributed widely enough to establish herd immunity and curb the virus.

In the meantime, public health experts are warning that winter could bring another alarming rise in COVID-19 cases and deaths. They have urged Americans to limit travel and personal contact, including around the holidays, while continuing to wear masks and keep a safe distance from others when venturing out in public. Some dioceses, meanwhile, have suspended in-person worship through Advent and Christmas.

“There are simple things we can do … to show our mutual respect and concern for one another,” Hollerith said. “Yes, we are tired from the confines and struggles of this pandemic, and yes, it’s been a long nine months. But now, more than ever, we have to protect each other because there has been far too much death. A vaccine is coming and we will get through these difficult days, but we will only succeed if we do it together.”