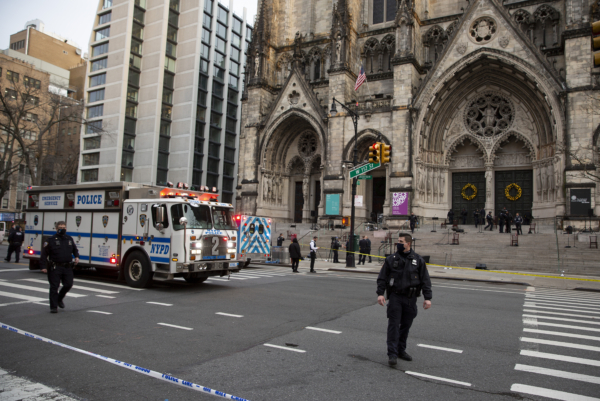 New York police officers block off the scene of a shooting at the Cathedral Church of St. John the Divine on Dec. 13, 2020. Photo: Ted Shaffrey/Associated Press

[Episcopal News Service] Editor’s note: This story has been updated to include the identity of the gunman.

Police shot and killed an apparently suicidal man on the steps of the Cathedral Church of St. John the Divine in New York City on Dec. 13 after he began firing two guns into the air just after an outdoor Christmas concert concluded. No one else was injured.

The cathedral choir had just finished performing a free Carols for the Community concert – masked and distanced – on the front steps around 3:45 p.m., and the crowd of hundreds of attendees was dispersing when the man began firing shots into the air in front of the bronze doors, according to New York Police Commissioner Dermot Shea and the Associated Press. At least 400 people had watched the concert from Amsterdam Avenue, including Lisa Schubert, the cathedral’s vice president of programming and external relations. Schubert told Episcopal News Service she estimated the shooting started 4 minutes after the end of the concert, by which point about 150 people remained in the area in front of the cathedral.

People dove for cover, hiding behind lampposts or lying flat on the steps as the gunman fired, although he did not seem to be aiming at anyone, according to New York Bishop Andrew Dietsche, who was also in the street along with the Rt. Rev. Clifton Daniel III, the cathedral’s dean, when it happened. Witnesses reported that the man was yelling, “Kill me,” Shea said at a press conference in front of the cathedral later that evening. Police responded “almost immediately” and shot and killed the man, who was later identified by the New York Police Department as Luis Manuel Vasquez Gomez.

Watch as @NYPDShea updates the media on a police involved shooting that took place earlier today at the Cathedral Church of Saint John the Divine. pic.twitter.com/8JMgP3WoBk

“It is by the grace of God today that we don’t have anyone struck” by the gunfire except Vasquez, Shea said.

Police recovered two semiautomatic guns and a bag they believe Vasquez was carrying, which contained a full container of gasoline, rope, wire, knives and a Bible. Police had no word on a motive but said Vasquez, 52, had a history of violent crime stretching back 30 years. His sister said he grew up in the neighborhood and his mental health had been deteriorating for years.

“He could have easily, easily, easily hurt other people,” Schubert told ENS. “This is an incredible tragedy – and we’re so lucky.”

“It is horrible that our choir’s gift to New York City, a much-needed afternoon of song and unity, was cut short by this shocking act of violence,” the cathedral’s staff wrote in a statement. “We will remain strong, together, and serve as a safe space for prayer, meditation and celebration during the upcoming holiday season. We are grateful to our first responders, and our prayers are with all those affected by this event.”

St. John the Divine, on Manhattan’s Upper West Side, is the seat of the Diocese of New York, the largest Episcopal church and one of the largest cathedrals in the world. It was closed on Dec. 14 as police continued to investigate the shooting, but Schubert said it was expected to reopen for masked, physically distant private prayer on Dec. 15. The concert was one of the few in-person public events in the cathedral’s mostly virtual programming calendar.

“It was an absolutely beautiful holiday concert,” Schubert said. “It was just filled with hope – you know, the news of the vaccine. It was a community of people all very respectful and everyone was wearing masks. … Everything was just so beautifully calibrated and moved so beautifully, and then it was just insanity.”

Schubert said the cathedral staff have plenty of “natural resilience” and are mostly feeling grateful for the rapid response of the New York Police Department and the cathedral’s security team. Still, she said, “I think everyone is just completely devastated.”

“I ask your prayers for the cathedral clergy, staff and community; for the many who were traumatized by the event; and for the gunman himself,” Dietsche wrote in an email to the congregations and clergy of his diocese. “On an afternoon that brought us the most sublime and beautiful Christmas music, an hour of terror, and the shock of self-destructive violence, I bid you all, in the name of Christ, the fullness of Advent hope and Christmas peace.”