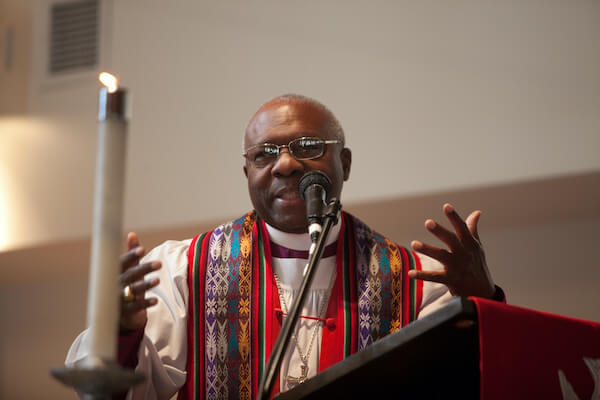 Scantlebury was born and raised in Panama, where he served as an acolyte, choir member, lay reader and Sunday school teacher at St. Paul’s Episcopal Church in Panama City. He earned a bachelor’s degree in psychology from the University of Panama, and after four years as a television news cameraman, entered the Episcopal Theological Seminary of the Caribbean, earning a Master of Divinity degree in 1973. He was ordained a deacon later that year and a priest in 1974.

After serving several parishes, including his childhood congregation, in Panama, he was elected bishop suffragan of Panama in 1991. He became assisting bishop in Mississippi in 1994, and in 2000, Bishop William Persell called him to serve in the Diocese of Chicago, citing his long experience in Panama and his extensive work for the wider Episcopal Church.

“During the three years we served together, I came to value Victor’s quick humor, passion for youth ministry, especially in our Latino congregations, and his heart for global mission,” said the Rt. Rev. Jeffrey Lee, bishop of Chicago. “We owe him particular gratitude for the work he did nearly 20 years ago to establish our mission relationship with the Diocese of Southeast Mexico. Victor cherished his time in Chicago and remained an avid fan of the Chicago Cubs, a devotion he had held since his days as a television cameraman.

“Please pray for Victor’s family, especially his wife, Marcia, their three adult children and beloved grandchildren, as they grieve this sudden loss. Funeral arrangements have not yet been made, but we will share more news when it is available.”