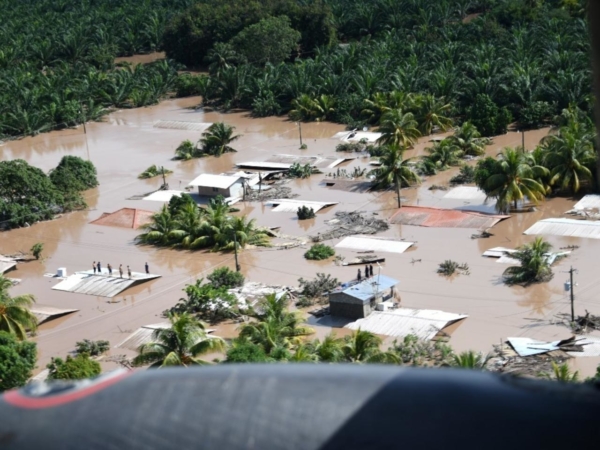 Hondurans stand on top of a roof in an area flooded by hurricanes in November 2020. Photo courtesy of the Diocese of Honduras

[Episcopal News Service] Before November, Honduras was already one of the most troubled areas served by The Episcopal Church, beset by poverty, violence, political corruption and COVID-19.

On top of all that, the country this month experienced the unthinkable: not one but two Category 4 hurricanes in less than two weeks.

“This is the story of a poor country that suddenly got poorer,” said the Rt. Rev. Lloyd Allen, bishop of the Diocese of Honduras.

Allen told Episcopal News Service by email that his diocese and his country are still assessing the damage from hurricanes Eta and Iota, and frequent power outages are making it more difficult to gather information. Hurricane Eta came ashore in Nicaragua on Nov. 3 with winds up to 140 mph, battering coastal areas. However, the worst damage was caused not by the wind or storm surge but by the severe flooding from massive amounts of rain dropped by the storm as it moved slowly inland over Honduras and Guatemala. Over several days, parts of Honduras received more than 20 inches of rain, inundating towns and cities, some of which were inaccessible. Landslides devastated the region, including one that killed about 100 people in Guatemala. 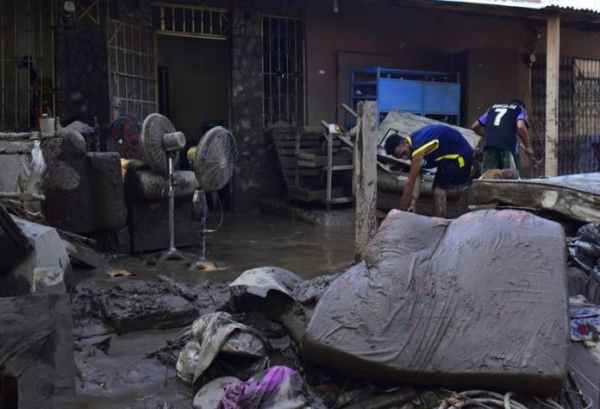 Hondurans remove damaged items from a home in an area flooded by hurricanes in November 2020. Photo courtesy of the Diocese of Honduras

On Nov. 15, Hurricane Iota made landfall just 15 miles south of where Eta hit, an unprecedented occurrence in nearly 170 years of weather records, according to The Washington Post. Parts of Honduras were still underwater from Eta as the torrential rains returned, this time from an even more powerful storm.

Some places received a year’s worth of rain in just two weeks, the Post reported. Tens of thousands of people were left homeless, and Honduras’ main airport was underwater for the second time in two weeks, causing damage that will keep the passenger terminal closed for more than a month. Roads, utilities and other infrastructure received widespread damage, further complicating any relief efforts.

The floods and landslides “wreaked devastation on a vast scale, leaving death, destruction and missing people everywhere, and over 3.5 million temporarily dependent on emergency aid,” Allen said. The two storms have killed about 100 Hondurans and caused an estimated $10 billion in damage there, the Associated Press reported, and many more people are still missing or unaccounted for. 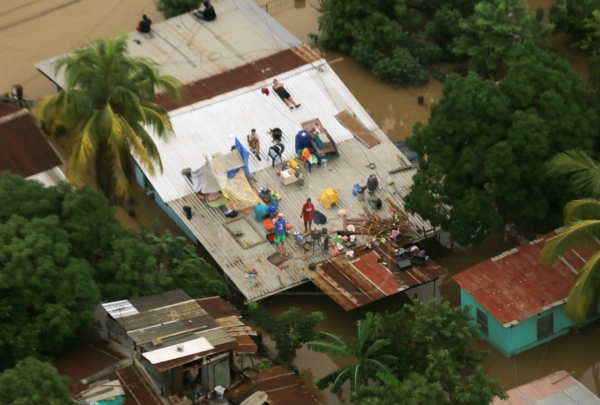 Hondurans stand on top of a roof in an area flooded by hurricanes in November 2020. Photo courtesy of the Diocese of Honduras

Allen said that all the clergy in his diocese – which includes 156 parishes and a network of schools – are accounted for, and most are helping with relief efforts. One deacon’s home was flooded, and some church members have lost everything, he said. He has not received any reports of damage to churches, some of which are now being used as shelters. However, the diocese’s Holy Cross Camp and Conference Center was heavily damaged.

“There is much more to be done,” Allen said, “and we cannot do this alone.”

Support from the wider church has been valuable in the aftermath of the storms, but also in preparing for such disasters. In 2019, church leaders in Honduras attended a disaster risk reduction workshop facilitated by Episcopal Relief & Development and Church Pension Group. The diocesan disaster committee established after that workshop is overseeing COVID-19 and hurricane response operations, Nagulan Nesiah, Episcopal Relief & Development’s senior program officer for disaster risk and reduction, told ENS.

The scale of the tragedy is compounded by the preexisting crises in the region. Strained health care systems in Honduras, Nicaragua and Guatemala were already struggling with COVID-19, which is expected to spread further in the region as people evacuate to shelters where pandemic protocols like social distancing may not be possible. Aid coordinators fear other diseases will spread because of the flooding. 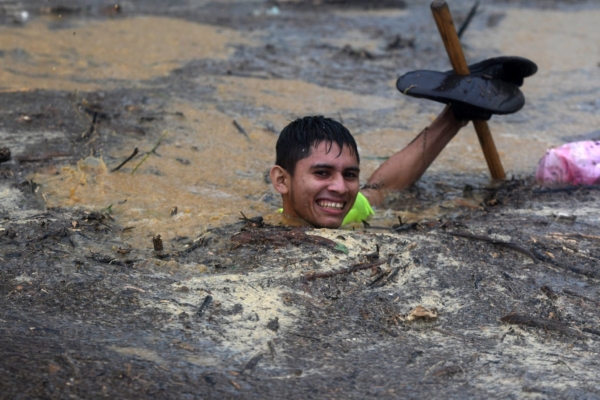 A Honduran wades through floodwaters. Photo courtesy of the Diocese of Honduras

“The COVID-19 pandemic has restricted movement in the area and added layers of complexity to any response, challenging the relief and recovery efforts of our partners,” Nesiah said.

According to the World Bank, about two-thirds of Hondurans live in poverty. It is also one of the most dangerous countries on Earth, with cities plagued by gang violence and police forces rife with corruption. Violence against women and girls is especially egregious. Conditions like these have driven many Hondurans to seek a better life in the United States, applying for asylum at the border. The lingering damage from hurricanes Eta and Iota is expected to drive even more Hondurans north.

Allen says that trend will only increase unless major action is taken to ameliorate the climate crisis. Although individual weather events cannot be directly attributed to climate change, stronger hurricanes – supercharged by warmer ocean waters, as Eta and Iota were – are consistent with climate scientists’ projections. Land use and agricultural practices play a major role too, Allen says. For example, deforested slopes are more prone to major landslides when torrential rain follows a drought.

“From my perspective, the main cause is climate change and deforestation. Across Honduras, drought and climate change have left agricultural workers reeling,” he told ENS. “Climate change is transforming rural Honduras, and the effects are just beginning. … Without monumental shifts in small farmers’ resiliency to extreme weather, today’s patterns of disaster, ruined crops and hunger are bound to continue.

“I don’t want to sugar coat this … we’re in this for the long haul,” he said.