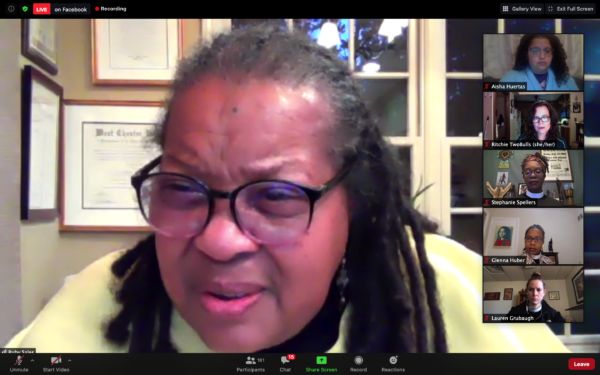 [Episcopal News Service] A brutal campaign season is over. The votes have been tallied. A new president is scheduled to be inaugurated on Jan. 20. How can Episcopalians who committed themselves this year to political engagement build on that collective energy and momentum in promoting moral values in the public sphere?

That was the question raised Nov. 19 at the latest Episcopal Justice Assembly, organized by The Episcopal Church’s Department of Reconciliation, Justice and Creation Care. More than 160 people joined the video conference call on Zoom to hear from prominent Episcopal justice leaders, including longtime civil rights activist Ruby Sales, and to share their experiences at the local level.

“Episcopalians, you are organizers doing the work of justice, not just for the poor but with people of all backgrounds,” the Rev. Melanie Mullen, the church’s director of reconciliation, justice and creation care, said in her welcoming remarks.

Mullen emphasized Episcopalians’ continued support of the church’s commitment to the Poor People’s Campaign, an ecumenical initiative launched in 2018 to rally Americans behind the moral cause of fighting poverty.

The original Poor People’s Campaign, led by the Rev. Martin Luther King Jr., was an appeal for economic security, the last initiative led by the civil rights leader before his April 1968 assassination. This year, the Episcopal Church has deepened its engagement with the revived Poor People’s Campaign through in-person calls to action and online organizing.

The inaugural Episcopal Justice Assembly was held online June 10 and was attended by nearly 500 people. On Nov. 19, at the follow-up gathering, participants gave the Zoom version of a standing ovation to Sales, whose justice work dates to the 1960s when she joined the Student Nonviolent Coordinating Committee as a teenager. Her life was spared in 1965 when Jonathan Daniels, an Episcopal seminarian, was shot and later died while shielding Sales from an attacker’s bullet during civil rights demonstrations in Hayneville, Alabama.

“What does it mean to work for social justice in the 21st century of a capitalist technocracy where very few lives matter and Black and indigenous lives matter least of all?” Sales said. “How is it that we raise people up from disposability … not only in terms of God’s kingdom but also the project of democracy?

“These are important questions that require us to interrogate our assumptions, not only about others but about ourselves and our relationship to God.”

Participants also heard from Ritchie Two Bulls of Minneapolis, Minnesota, who spoke of her work with First Nations Kitchen, a feeding ministry centered on fostering personal relationships and serving the cuisine of the region’s indigenous ancestors.

The Rev. Mike Angell, rector of the Episcopal Church of the Holy Communion just west of St. Louis, Missouri, briefly discussed local Episcopal advocacy against partisan gerrymandering and carrying guns in churches. How does progress come? “Slowly,” he said.

“All effective organizing is slow, patient work,” Angell said. “We tend to be ‘flash in the pan’ … and what we’re finding is the relationship-building is just so critical.”

And the Rev. Kim Jackson, a Diocese of Atlanta priest who was just elected to the Georgia state Senate, said people of faith often feel called to address the immediate needs of the people in their communities who are suffering – the “downstream” problems. That work is important, she said, but the root problems also need to be addressed. “This work of going upstream is also important.”

Video of the Episcopal Justice Assembly is available on Facebook.