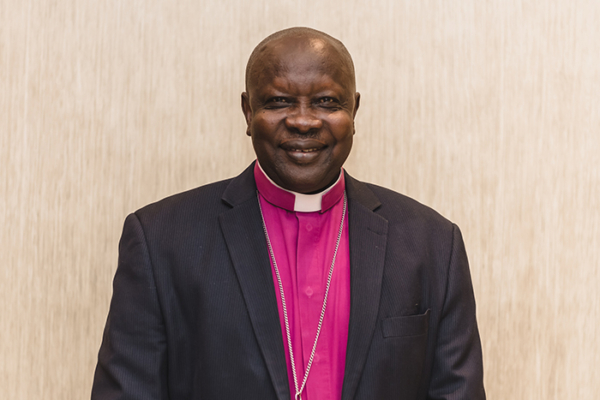 [Anglican Communion News Service] The Primate of the Episcopal Church of Sudan, Archbishop Ezekiel Kondo, has urged Christians around the world to “not grow tired of praying for Sudan”. Archbishop Ezekiel made his comments in an interview for the Christianity Today website, which focused on changes in the country since the revolution. The country is currently in a transitional period following the deposition of former President Omar al-Bashire on 11 April 2019 after 30 years in power.

The change was sparked by street protests in the country from 19 December 2018. The Transitional Military Council and the Forces of Freedom and Changed agreed A 39-month transitional phase for the county’s institutions and procedures as part of a political agreement over a draft constitution. During the time, Sudan’s Head of State is a Sovereignty Council which brings together military and civilian representatives. There is a civilian Prime Minister and a mostly civilian cabinet.

In his interview, Archbishop Ezekiel talks about the changing status for Christians in the country, but warns there is a long way to go to achieve true freedom of religion. “There has been no significant change”, he said when asked to rate religious freedom on a scale of one to 10. “I would give it a four, before and after.

“There have been two good developments. One, Christmas has been declared a public holiday for everyone. Two, Christian schools can now operate on Saturday. The weekend is Friday and Saturday, with Sunday a working day. Now Christian schools can have Sunday off. So maybe I can change my opinion, and give Sudan a five, after the revolution.”

He continued: “There remains difficulty in getting approval to build new churches. There are so many churches that have been built previously with no legal status, and the government has not acted to find solutions. The Ministry of Housing and Planning still has the right to come and demolish them at any time.

“In addition, though there is a Christian woman on the Sovereignty Council, there is not a single Christian in the Cabinet of Ministers, or among the state-appointed governors.”

Archbishop Ezekiel said that while the country’s apostasy law has been repealed, the freedom to convert will require a cultural change. “Let people decide for themselves about religion, that is their freedom. I should be able to change from Islam to Christianity if I want to, or from Christianity to Islam if I want to.”

The freedom for Christians to share their faith with Muslims was “possible on paper”, he said, but he doubted whether that freedom existed in practice. “Islam is a culture”, he said. “It will take some time for people to get used to the change in the apostasy law. But perhaps it will be possible in the long run.”

The Church in Sudan, Archbishop Ezekiel said, was “spiritually strong” but facing practical difficulties. “What we lack is biblical teaching. After the secession of South Sudan, many learned people left Sudan to go there. The majority of churches also lack finances. We need to grow in these areas, in order to become self-reliant.

“But church buildings are full, despite the difficulty in transportation. People come from great distances, and this is one example that shows their love for the Lord. And Covid-19 has really helped people come together, pray, and study the scriptures.”

“Please do not grow tired of praying for Sudan”, he added. “Pray that what has been done in this revolution will be implemented. Pray the same for the peace deals signed with some of the armed groups, and that others will sign. It is only a partial peace right now, not complete.

“If peace comes, it will result in a strong economy, as money will shift from war to development. Refugees and the internally displaced will return, in order to develop their own areas and houses. This is very important.

“Pray also for the church to be faithful to the gospel.”