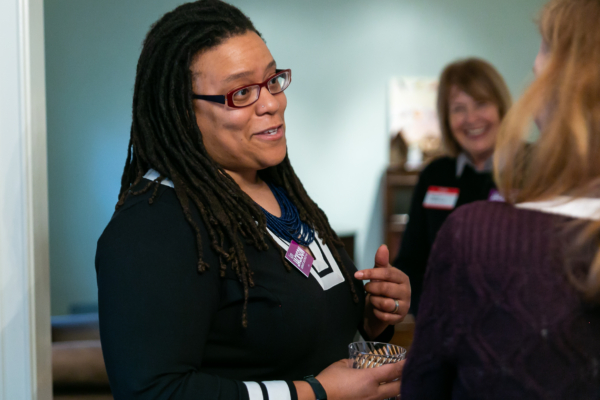 [Episcopal News Service] In last week’s general election, LGBTQ candidates made history with milestone victories around the United States. Among them was the Rev. Kim Jackson, a priest in the Diocese of Atlanta, who is now the first out LGBTQ person ever elected to the Georgia state Senate.

Jackson won with nearly 80% of the vote in the race to represent Atlanta’s eastern suburbs, where she lives with her wife. It’s the fulfillment of a lifelong dream for Jackson, who has wanted to be both a pastor and an elected official since she was a girl. In addition to her new job at the Georgia Capitol, she will continue in her role as vicar of the Church of the Common Ground, a congregation of homeless and vulnerable people that worships in a park a few blocks away.

Jackson ran as a Democrat in a reliably blue district, so her election was no surprise, but she was blown away by the “extraordinary” voter turnout, a phenomenon that rippled across the state and country.

“[About] 90% of registered voters turned out in my district, and that’s unheard of,” Jackson told Episcopal News Service. “I was really committed to trying to do my part to turn out my district, because getting people out to vote is just so crucial to our democracy.”

With such a decisive win, Jackson’s race saw none of the disputes over election results that have happened in the presidential race. But Jackson says that’s not just because of the overwhelming margin she won with; it’s also because of the respect she and her opponent, Republican William Freeman, have for each other and for the democratic process.

“My opponent, particularly, has consistently reached out during this time, and we had a commitment and agreement that we would run our races in ways that were respectful and civil, and we made that commitment as soon as I won the primary,” Jackson said. “And I think that that, honestly, is characteristic of the nature of my district and perhaps even maybe Georgia, more broadly speaking, that bipartisanship. I mean, the truth is that you can’t pass anything in Georgia if you don’t have Republicans on board. And so, when it comes to making positive change for Georgians, we work together.”

Jackson got Atlanta Bishop Rob Wright’s approval before running – “as Kim Jackson, not the Rev. Kim Jackson,” she said – and she did not campaign in her capacity as a priest, in keeping with laws that limit political activity by churches. Though her election is unusual, it’s not unprecedented. Former three-term U.S. Sen. John Danforth, a Missouri Republican, is also an Episcopal priest, though he never served a parish. One of the two Democrats in the upcoming runoff elections for Georgia’s U.S. Senate seats is the Rev. Raphael Warnock, senior pastor of the Ebenezer Baptist Church in Atlanta. 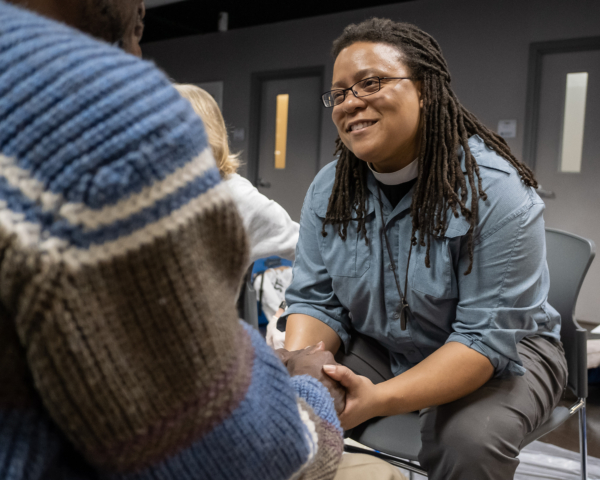 The Rev. Kim Jackson speaks to a man after washing his feet. Courtesy photo

Jackson’s congregants at the Church of the Common Ground were “thrilled and excited” to hear the news of her election, she said.

“I think they’re just incredibly proud,” Jackson told ENS. “They know that I am committed to bringing their stories and bringing even my congregants, when they want to, inside of the Capitol, so that they understand and know that the Capitol is their house, too.”

The historic nature of her win has drawn media attention from around the country, but it’s not the first time she’s broken a barrier. Jackson was also the first Black openly LGBTQ priest in the Diocese of Atlanta.

“It’s ironic that a portion of my identity that, for so long, caused a great deal of grief in my family – I had to reconcile it religiously, spiritually … has resulted in jubilation and joy and celebration in another part of my life.”

She’s still not exactly sure how her roles as a priest and a state senator will overlap, but she is confident in her ability to navigate her “intertwined” vocations.

“I’m just kind of walking by faith here,” she told ENS, “and we’ll see how it all turns out.”