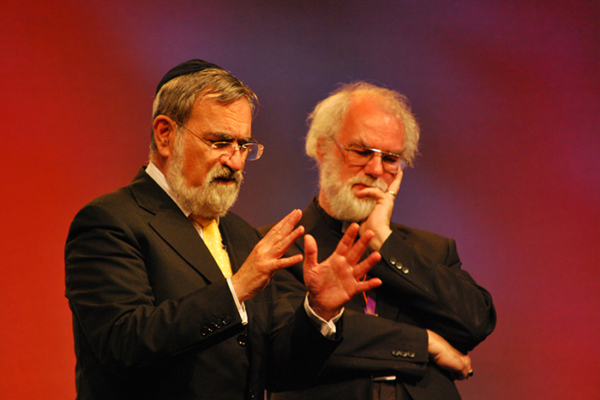 [Anglican Communion News Service] The Archbishop of Canterbury has paid tribute to the former Chief Rabbi of Great Britain and the Commonwealth, Lord Jonathan Sacks, who died on Saturday, just weeks after announcing he had cancer. Rabbi Sacks served as Chief Rabbi for 22 years before retiring in 2013. He was buried yesterday (Sunday) in a modest ceremony attended by just a few people, because of England’s current Covid-19 lockdown restrictions.

In a brief statement on Saturday, Archbishop Justin spoke of his “deep sadness”, and said that Rabbi Sacks had “devoted so much of his life to reflecting on God at the most profound level – and we are all the beneficiaries of his wisdom.”

Archbishop Justin added: “At the same time, Rabbi Sacks was always someone who you could relate to instantly. He was always thoroughly part of the world and he relished that.

“He had a deep commitment to interpersonal relationships – and when you met him you couldn’t help but be swept up in his delight at living, his sense of humor, his kindness, and his desire to know, understand and value others.

“It was that rare combination – profound depth, and equally profound commitment to relating with others – that made the leadership he offered possible.

“My prayers are especially with Rabbi Sacks’s family, with all those whose lives he touched, and with the whole Jewish community as they come to terms with this great loss.

May his memory be a lasting blessing.”

The Council of Christians and Jews, the world’s oldest inter-faith organization, described Rabbi Sacks as “a towering religious leader and intellectual. . . He developed friendships with successive Archbishops of Canterbury, [Roman Catholic] Archbishops of Westminster and other Christian leaders.

“His books, other writings, lectures and media appearances were followed and admired not only by the Jewish community but by millions of Christians and people of all faiths and none. His sparkling address to the Lambeth Conference in 2008 is still remembered today. . . His influence will endure for years to come through the many he inspired, influenced and touched with his warmth and wisdom.”