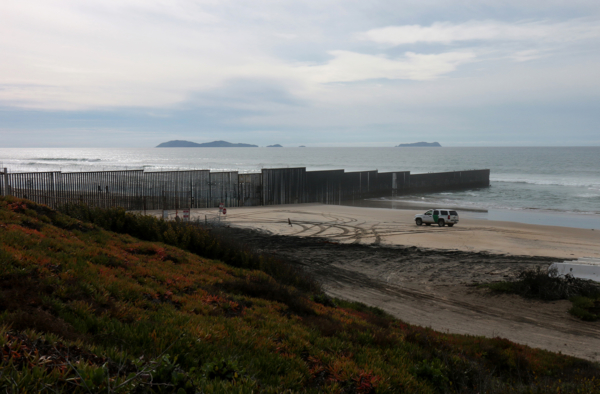 A U.S. Customs and Border Control agent patrols the U.S.-Mexico border fence between Tijuana and San Diego, California, in what is on the United States side, Friendship Park, in 2019. Photo: Antonio Zaragoza for Episcopal News Service

[Episcopal News Service] Planning for this year’s Border Ministries Summit, to be held online on Nov. 20 and 21, started well before the presidential election, but in focusing on the theme of Christian peacemaking, organizers saw an opportunity to respond to this post-election moment, whatever the outcome at the polls.

“How do we as Christians live as peacemakers in a world that is divided and angry?” San Diego Bishop Susan Snook said in an interview with Episcopal News Service. Her diocese is hosting the summit. “How do we help people enter into and follow the way of love and live lives of reconciliation as Jesus has taught us to?”

Now in its third year, the summit is intended not only for people already involved in migration ministries, but also for Episcopalians who simply want to learn more about the issues and how to get involved, Snook said.

The keynote speaker will be Jon Huckins, co-founder of the Global Immersion Project. Huckins is scheduled to outline realistic, theologically grounded approaches to responding to global conflicts, as well as the peacemaking skills promoted by his organization.

During the two-day summit, each of The Episcopal Church’s border dioceses will have time to present a summary of its work along the southern border. Snook said the nature of much of that work has changed dramatically in recent years due to shifts in federal policy and the challenges posed by the coronavirus pandemic.

Episcopalians in her diocese had begun bringing donations directly to migrant families awaiting the outcome of asylum requests, but the Trump administration’s “remain in Mexico” policy has put many of those families out of physical reach. The pandemic also has made it difficult for Episcopal leaders to travel across the border and provide assistance, though the dioceses continue working with regional interreligious partners to support asylum-seekers south of the border.

“As religious leaders, what we understand together is that these are people who are created in the image of God, beloved by God, deserving of dignity and respect,” Snook said. “And whatever the final determination is regarding whether they can stay … we as Christians need to reach out to them with love and care for them as human beings.”

Last year, about 200 people attended the Border Ministries Summit when it was held in person in the Diocese of Arizona. It’s too early to say how many people will join the online summit this month, Snook said, but she hopes that the convenience of meeting online will allow wide participation from across the country and the church.

There will be plenty to keep participants’ attention. A panel of bishops from Mexico and Central America will discuss conditions in their dioceses. Immigrants will share their first-person stories. Lawyers with expertise in immigration law will delve into legal topics. Another presentation will offer perspectives from the U.S. Border Patrol.

Representatives from The Episcopal Church’s Office of Government Relations and Episcopal Migration Ministries, or EMM, also will provide summaries of their work with immigrants, asylum-seekers and refugees on behalf of the church. EMM is a co-sponsor of the Border Ministries Summit and has increased its focus recently on enlisting congregations and “engaging with the work that Episcopalians are doing on the ground across the country in all aspects of migration,” said Allison Duvall, the agency’s church relations manager.

Duvall plans to talk at the Border Ministries Summit about EMM’s growing network of Episcopalians who are involved in ministries supporting migrants in detention, and EMM has been working with a separate interfaith group of volunteers who are focused on helping asylum-seekers. These summits also foster interpersonal connections that fuel action locally, with a “real impact on the lives of real people,” she told ENS.

“Because it’s virtual, people from all across the country can participate and attend, then confront the injustices of our systems in their own places,” Duvall said. Immigration isn’t just an issue on the nation’s geographic border, she said. “The border is nationwide.”

This is the Border Ministries Summit’s third year. The first was held in November 2018 in El Paso, Texas, and hosted by the Diocese of the Rio Grande. Last year, the Diocese of Arizona hosted the second summit in Tucson.

Much has changed since that last summit, said the Rev. David Chavez, Arizona’s missioner for border ministries.

“A lot has taken place around being attentive to how the pandemic has impacted migrants who are waiting at a shelter for their ‘credible fear’ hearing,” Chavez told ENS, referring to the hearings where asylum-seekers make the case that it would be unsafe for them to return to their home countries.

Despite the pandemic’s constraints, the diocese continues to support a shelter on the Mexico side of the border, in Nogales, that is run by a coalition of regional faith-based partners. More than 200 people are staying at the shelter as they await decisions in their requests for asylum in the United States.

Supporting asylum-seekers has become a priority of all the dioceses along the border. In some cases, Episcopalians are helping those migrants with basic needs, such as food and clothing, though support also can take the form of emotional and spiritual assistance, said Flor Saldivar, the Diocese of West Texas’ coordinator for immigrant and refugee ministries.

One family from Angola asked only for prayers, to help carry them through a period when the family’s twin infants were hospitalized. A West Texas congregation arranged for a blessing ceremony, and parishioners wrote letters of support to the family that were translated into the family’s native Portuguese.

“We want to help migrant communities of all kinds because we acknowledge that they are our neighbors, and we are asked to love them and serve them,” Saldivar told ENS. 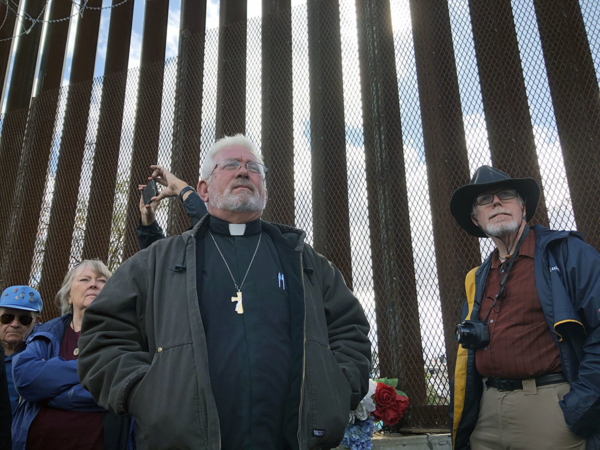 Helping asylum-seekers is a growing ministry for the Diocese of Rio Grande as well, though ministry leaders there have faced similar challenges. Diocesan ministers haven’t been able to travel across the border during the pandemic, but the diocese continues to provide strong financial support for a migrant shelter in Juárez, according to the Rev. Lee Curtis, Rio Grande’s canon to the ordinary, who is based in El Paso.

Federal policy also has shaped such ministries, and Curtis and other Rio Grande leaders are beginning to discuss how they will respond to potential changes if there is a new White House administration next year.

“A change in the ‘remain in Mexico’ policy is the one that would affect us the most directly and most quickly,” Curtis said. If Joe Biden takes office in January and lifts that policy, it could mean thousands of asylum-seekers waiting in the United States rather than in Mexico for their cases to proceed.

Ramping up assistance to that many people would be a challenge for border dioceses in normal circumstances, Curtis said. “In the midst of a pandemic, it’s going to be even more challenging.”

Episcopalians in border dioceses also have been active in supporting migrants in detention.

“Some of our churches, and our diocese, have focused intentionally on elevating that conversation, providing activities around detainees at our detention centers here in Arizona, particularly as it relates to COVID,” Chavez said.

Part of that work has involved getting the stories of detainees into the public eye, such as by writing letters to newspapers detailing what the detainees say are unsafe conditions in detention facilities. Some Episcopalians also have contacted lawmakers directly to press for more humane policies.

And in October, Arizona’s Diocesan Convention voted to establish a companion diocese relationship with the Diocese of Western Mexico.

The peacemaking theme of this Border Ministries Summit fits with the diocese’s current efforts, Chavez added, and he welcomes the chance to learn what others are doing.

“I’m looking forward to exploring how that looks like on the ground and at a congregational level,” he said. Being a force for peace reflects “the core of our church,” he said, and the work is urgent.