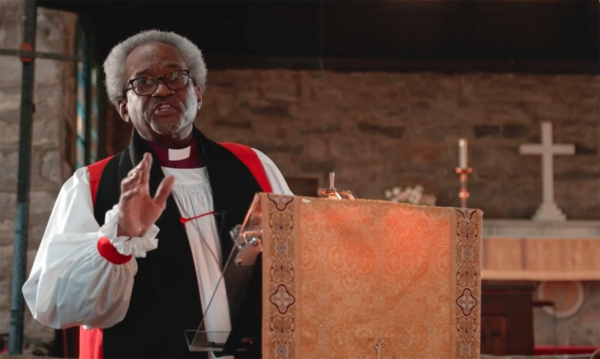 Presiding Bishop Michael Curry preaches from the historic chapel at Saint Augustine’s University, an Episcopal-affiliated historically Black university in Raleigh, North Carolina, during “Holding onto Hope: A National Service for Healing and Wholeness” on Nov. 1, 2020.

[Episcopal News Service] On Nov. 1, with the most turbulent U.S. election in recent memory two days away and the COVID-19 pandemic causing widespread suffering and death, thousands of Americans tuned in to Washington National Cathedral’s virtual interfaith prayer service, which brought together an array of Americans of diverse faiths, races and backgrounds – from internationally known leaders to middle school students – to heal and pray for the country.

Titled “Holding onto Hope: A National Service for Healing and Wholeness,” the service led participants through three stages: confession and reckoning, lament and grief, and hope. It was a mix of live and prerecorded segments featuring Scripture readings, musical performances, prayers from religious and civic leaders like the Rev. James Martin and former Secretary of State Condoleezza Rice, and a sermon from Presiding Bishop Michael Curry.

Justice – especially as it relates to the racial, democratic, health, environmental and economic crises America faces – was a recurring theme throughout the service, which opened with an acknowledgement of the Anacostan and Piscataway tribes that once inhabited the land on which the cathedral sits.

The Rev. James Martin, a Jesuit priest known for advocating for more inclusive attitudes toward LGBTQ people in the Roman Catholic Church, led participants in an examination of conscience and confession of structural sin, or “sin that’s built into our social, economic, political, and even ecclesial systems, sin that pervades society, and which we participate in sometimes in ways that are harder for us to see.”

Martin encouraged them to think about when they knowingly or unknowingly participated in these sins, or allowed their privilege to prevent them from stopping them. Students, clergy and lay volunteers led prayers of confession for the systemic sins of white supremacy, police brutality, income inequality and “the idolatry of nationalism,” making specific references to Native genocide and the veneration of the Confederacy.

Valarie Kaur, a Sikh filmmaker and speaker, spoke of the power of using “revolutionary love” to “be brave with our grief” – even the overwhelming grief for the 230,000 Americans who have died of COVID-19, for people of color killed by police and for the natural environment as it suffers from man-made climate change. Prayers of lament were offered by people on the “front lines” in the Diocese of Atlanta: a student, a priest, a deacon, a farmer, new parents and a nurse who prayed for Americans “not to remove the masks from our faces but the masks from our hearts.”

Curry preached on Jesus’ Sermon on the Mount (the Beatitudes) and connected it to other “mountaintop moments” in the Bible and in American history, like Moses’ glimpse of the Promised Land and the Rev. Martin Luther King Jr.’s speech before his assassination – moments when followers of God can “behold not what is but what ought to be.”

Curry spoke from the chapel at Saint Augustine’s University, an Episcopal-affiliated historically Black university in Raleigh, North Carolina, near his home. He had earlier preached at the cathedral’s morning worship service for All Saints’ Day, which is also the fifth anniversary of his installation as presiding bishop. During the national prayer service, he also preached on American texts like the Declaration of Independence and the Pledge of Allegiance, noting the similarity between the values they espouse and the Beatitudes – values that may sound simple but form the bedrock of democracy, and of society itself.

“Our values matter!” Curry preached. “A world, a society, a life devoid of values and ideals that ennoble, that lift up and liberate, is a world descending into the abyss, a world that is a dystopian vision of hell on earth.”

Prayers for the nation were offered by spiritual leaders, including Presiding Bishop Elizabeth Eaton of the Evangelical Lutheran Church in America, Rabbi Shoshanah Conover and Mohamed Elsanousi, and Rice, the former secretary of state.

“Dear Heavenly Father,” Rice prayed, “we especially pray for our country as we go into this season of election. We ask you to help us to remember that we are, despite all of our troubles, a privileged people to be able to make our voices known, to choose those who would govern us. … Please be with each and every one of us, even as we are a divided people, to treat each other with respect, to treat each other with kindness, especially when we disagree, so that we might again make common purpose and common cause to be a people worthy of your grace.”

The service was viewed at least 4,000 times on Facebook and YouTube, and was complemented by a live prayer hotline developed in partnership with the church innovation lab TryTank. Trained chaplains will be available to pray with callers in English or Spanish about anything that’s on their minds at 202-998-3510 from 8 a.m. to 8 p.m. Eastern time through Election Day.

“Whatever your politics, however you have or will cast your vote, however this election unfolds, wherever the course of racial reckoning and pandemic take us, whether we are in the valley or the mountaintop, hold onto the hope of America. Hold onto hope grounded in our shared values and ideals. Hold onto God’s dream. Hold on and struggle and walk and pray for our nation,” Curry said in his sermon.