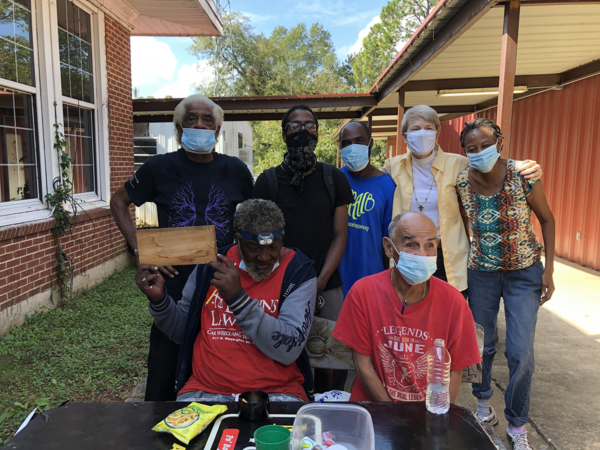 Friends pose for a photo with the Rev. Christie Fleming during lunch Oct. 22 at The Lighthouse, a shelter Fleming opened in Bastrop, Louisiana. Photo: Maple Jones

[Episcopal News Service] The Rev. Christie Fleming had just officiated a funeral when she saw Sylvester White for the first time. The two were in a cemetery when Fleming, then-vicar of Christ Episcopal Church in Bastrop, Louisiana, noticed White passing time amid the gravestones. “And we started talking, and we stayed connected after that,” Fleming recently told Episcopal News Service. White, who is 62 and homeless, began attending services at Christ Church. “And then when I finally decided that I wanted to start the shelter and all of that, of course he wanted to be a part of that,” Fleming said.

The shelter is now The Lighthouse, Bastrop’s only homeless shelter, which opened about a month ago amid the pandemic in the annex of a former school building. Fleming, who is now the Episcopal Church in Western Louisiana’s missioner for community care and reconciliation, was a driving force behind the community project. The day shelter is open from 9 a.m. to 5 p.m. Monday through Friday and offers three meals a day. Plans are underway to open an overnight wing. 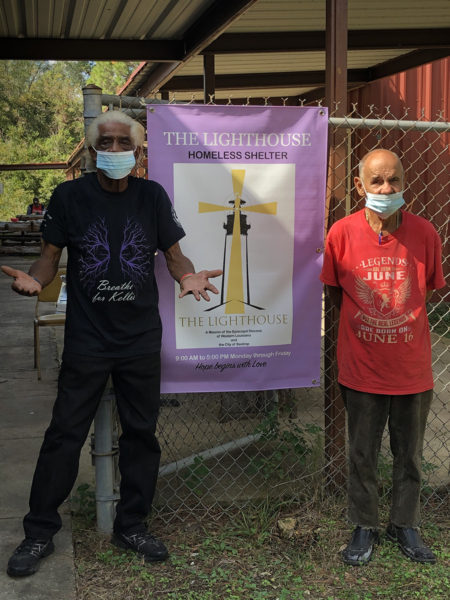 Mack and Robert pose for a photo at the entrance to The Lighthouse on Oct. 22. Photo: Christie Fleming

By 2008, three pillars of Bastrop’s manufacturing-based economy, two International Paper mills and a Jordache clothing factory, had closed. In 2017, nola.com ranked Bastrop ninth on its list of Louisiana’s 20 fastest-shrinking cities and towns, citing steady population decline since 2000, driven in large part by loss of industry. Today, Bastrop has around 10,000 residents – the majority African American – and 47.9% of the population lives in poverty. The city’s median household income is $20,439, and its unemployment rate is 9.7%. Morehouse Parish (counties are called parishes in Louisiana) is one of the largest employers; residents also work in forestry, agriculture, health care and service industries. “But finding work is not easy,” Fleming said.

Bastrop is in the Diocese of Western Louisiana, though geographically it’s in the northeastern part of the state. Bishop Jacob Owensby described Bastrop via email as “a place of bayous, pine forests, fertile farmland, small towns, and midsize cities.” The diocese’s churches are small; about half have an average attendance of 50 people, and at some congregations, as few as eight people fill the pews. Bastrop is emblematic of the region, Owensby said, where a weakened economy has forced many to move.

After seminary, Fleming moved to Bastrop from Berkeley, California, in June 2017 to serve as rector of Christ Church. Less than two years after arriving, she realized the rector position wasn’t the right fit. Fleming, 62, was a spiritual director before enrolling in seminary in 2014 and had worked with homeless communities in San Diego and San Francisco. “Certainly, within four or five months, it became clear to me” that Bastrop had a significant homeless population and that a local shelter was needed, she said. When Fleming left Christ Church last October and became the diocesan missioner of community care and reconciliation, she started the shelter.

With Bastrop’s economic collapse, homelessness in the city has grown, and until September, the closest shelter was 26 miles away. “It’s a chronic problem in Bastrop now, and there has not been a solution,” Mayor Henry Cotton told ENS. He has seen families living in cars: “I don’t know how they do it, but they do have children in school, and they make do.” Fleming characterized homelessness in Bastrop as subtle. “The homeless community is not out on the streets like they are in San Francisco,” she said.

As cities, San Francisco and Bastrop do not compare, though Fleming sees a commonality between their homeless residents. When she worked with unsheltered people in California, they felt that “they weren’t worthy, and then three months later, they’re serving the chalice because they see themselves in a different light. And a similar thing is happening here,” Fleming said.

A few weeks in, about 12 to 15 people, mostly men, spend time at The Lighthouse each day. Fleming said they are mostly from Bastrop originally, though some had moved to the city from other parts of Louisiana and the country to be near family. Many of them used to work for the paper mills. At the shelter, “people respect one another,” said Sylvester White, who grew up in Bastrop. There’s a room for watching television and playing games, a quiet room and a dining room. A fourth room will eventually serve as a chapel and clothing distribution site, and Fleming is working with the city on permission to create an overnight space with showers. A cold breakfast is on offer, and community members provide cooked meals such as casseroles for lunch and dinner. Maple Jones, one of The Lighthouse’s board members, coordinates meals. “So far, that has worked very, very well,” Fleming said. “We are so blessed to have the strong support of the community here.”

The diocese pays Fleming’s salary as director of The Lighthouse, which is both a diocesan mission and an independent nonprofit. Beyond Fleming, the shelter is run by volunteers. The city supports the nonprofit with $1,000 per month and police department support. The Lighthouse welcomes all needing shelter, Fleming said, whatever their faith and regardless of where they live. “We finally have our 501(c)(3) in place,” she said, adding that grant writing is in her future. “Hopefully we can get our financial foundation settled soon.”

White contributes to the endeavor by keeping the place clean; other clients contribute in their ways. “The homeless are equal partners,” Owensby said. “It’s not like we’re delivering what they don’t have and they’re just recipients.”