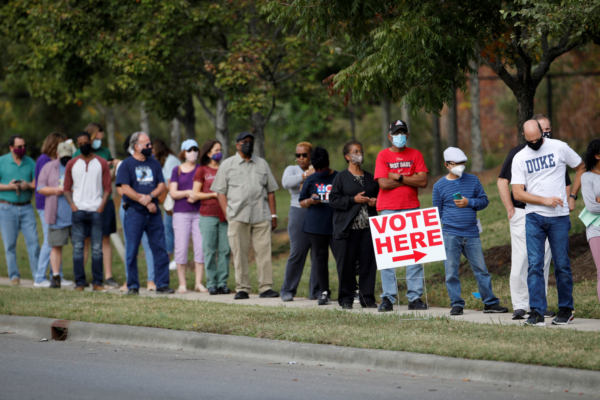 [Episcopal News Service] With the threat of voter intimidation and suppression hanging over the United States general election, which concludes Nov. 3, The Episcopal Church has organized training for clergy and lay chaplains to serve as “poll chaplains” on Election Day. The effort, a partnership with the nonprofit group Lawyers and Collars, recruits volunteers to “provide a calm and loving presence in the way of love, peace, justice and reconciliation” at polling places during one of the most turbulent moments in recent memory.

All Souls to the Polls

Deacons in the Episcopal Diocese of Central Pennsylvania will host a live, online prayer vigil from 6 p.m. to 9 p.m. on Monday Nov. 2

Unlike poll workers, volunteers who serve as poll chaplains won’t have any formal capacity or specific duties, but will serve as a nonpartisan “peaceful and prayerful presence” and be on the lookout for any potential voter intimidation, said the Rev. Stephanie Spellers, the presiding bishop’s canon for evangelism, reconciliation and creation care, during an Oct. 20 training webinar.

“I really believe that protecting every single voter and every single vote is not only essential for the health and integrity of our democracy – I really see it as an act of Christian discipleship,” said the Rev. Adam Taylor, interim president of Sojourners, who helped lead the training. “If we truly believe that every person has been made the image of God … then that means any person that is intimidated or is dissuaded or suppressed from voting – that that is an assault on the very image of God.”

During the webinar, volunteers learned about what voter intimidation or suppression can look like and what makes this election different from previous ones. Motivated by false claims of voter fraud, election officials around the country have made voting more difficult in recent years through tactics like requiring more stringent forms of identification, limiting the number of polling places and purging massive numbers of voters from the rolls. And in recent weeks, some people have caused problems near early voting locations by harassing volunteers, yelling through megaphones and holding armed militia demonstrations. Though such behavior is generally not illegal if the actions taken are done beyond the legally defined distance for electioneering (which varies by jurisdiction), some voters have reported that they felt intimidated.

“Voter suppression is real,” Taylor told volunteers during the training. “But voter fraud is an exaggerated myth. And we have seen in this election an effort by the president and other allies of his to sow chaos, fear and confusion into our election system and to – without any real shred of evidence – allege that the election is already rigged. That is dangerous rhetoric. And we have been working for over two years to try to sound the alarm about the real threat, the real legitimate threat of voter suppression.”

Taylor told volunteers that they should stand outside the polling place, let election workers know who they are and why they are there, and be calm and unobtrusive but ready to respond to an incident of potential voter intimidation – a term that has a broad interpretation but could look like some of the examples Taylor provided.

“It could be, in an extreme form, an armed militia member harassing voters while waiting in line,” Taylor said. “It could be an overly aggressive poll monitor who’s following voters to the polls and taking photographs of voters’ license plates in the parking lot. It could be people falsely telling voters that if they vote, someone will check if they have outstanding warrants or debts. It could be someone threatening to call ICE because a voter ‘looks illegal.’ It could be displaying false signs about voter fraud that threaten criminal penalties. It could be harassing or aggressively questioning voters who are speaking another language.”

If they see behavior like that, the poll chaplains have been trained to notify election officials, go to the aid of the person being harassed and de-escalate the situation. They should not try to argue with someone who is being belligerent or intimidating, Taylor said, and instead ask how the potential victim is feeling and how they can help. In the nine states Lawyers and Collars is focusing its efforts on, the group has set up a special hotline, staffed by lawyers, for poll chaplains to report problems. It also has a general hotline – 866-OUR-VOTE – that anyone can call. But Taylor stressed that poll chaplains should not put themselves in danger if they feel unsafe.

“We are not asking, nor are we recommending, that any of you intervene directly in a violent situation or try to confront directly the people that are instigating violence,” Taylor said. Instead, poll chaplains should “come alongside those who are being harassed or intimidated and be their ally in that moment, to try to deflect attention from the aggressor.”

Part of the intention of the poll chaplain program is that their mere presence at polling places – especially ordained chaplains wearing clerical robes or collars – may serve as a deterrent against intimidating behavior in the first place. Although one volunteer asked during the training whether some voters might be upset by seeing people in clerical garb during a pointedly secular event, Taylor said he wasn’t aware of any such complaints in the past.

“We won’t know entirely how much your presence deterred others from taking nefarious action, so we hope that most of you are very bored at your polling sites,” Taylor said.

The Rev. Melanie Mullen, The Episcopal Church’s director of reconciliation, justice and creation care, and Rebecca Linder Blachly, director of the church’s Office of Government Relations, directed trainees to the church’s comprehensive array of election-related resources, including a similar training for “protest chaplains.”

The Rev. Charles Robertson, the presiding bishop’s canon for ministry beyond The Episcopal Church, reminded trainees of Presiding Bishop Michael Curry’s call to partisan neutrality but not moral neutrality, and stressed that participating in activities like this is a way to bring people together.

“Poll chaplains can help to remind us that we are fellow Americans first,” Robertson said. “Our identity as people of faith – and our commitment to each other’s dignity – matters more than our commitment to a political party.”