[Episcopal News Service] The Rev. Ron Byrd Sr., The Episcopal Church’s missioner for Black Ministries, says the upcoming Nov. 10-12 International Black Clergy Conference will “get real” about transforming and empowering missional congregations, about facing common 21st-century challenges and even about the African diaspora itself.

Bishops from Cuba, Colombia, Panama and Honduras will offer prerecorded greetings and personal reflections in Spanish and English at the three-day gathering, themed “The African Diaspora United: Woke and Ready to Go.” The conference will be livestreamed each day from 1 p.m. to 3 p.m., Eastern time. 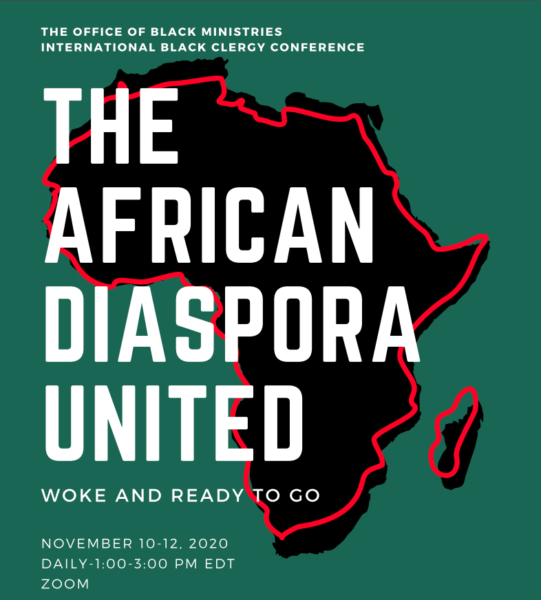 “As the presiding bishop says, as part of the seven spiritual practices he has outlined for the Jesus Movement, we’ve got to move our feet and go.”

Presiding Bishop Michael B. Curry is among the featured speakers, along with Dover Bishop Rose Hudson-Wilkin, the Church of England’s first Black woman bishop, and Archbishop Julio Murray, primate of the Anglican Province of Central America and the bishop of Panama.

Other speakers include Atlanta Bishop Robert C. Wright; the Very Rev. Kelly Brown Douglas, dean of the Episcopal Divinity School at Union Theological Seminary in New York City; and Elizabeth Henry, who until recently, served as a national adviser for Minority-Ethnic Anglican Concerns in the Church of England.

The conference will allow people of African descent within the Anglican Communion and The Episcopal Church to explore further what it means to be followers of Jesus in our times, said the Rev. John Harmon, rector of Trinity Episcopal Church in Washington, D.C. and a mentor in the Office of Black Ministries Mentoring Program.

“It will also help strengthen our common purpose in ministry, discover our unique identities and contributions, learn from our differences and locations, while cultivating strategies that will assist in building a stronger church and healthy congregations that embrace and honor the life and dignity of every person by encouraging ministries that seek to establish a just society,” Harmon said.

The Rev. Lester Mackenzie, rector of St. Mary’s Church in Laguna Beach, California, and a member of the conference planning team, said the emphasis on the African diaspora’s rich diversity is especially appealing.

“The conference offers me a springboard of community with different points of view than my own, as a Black South African cleric,” said Mackenzie, whose church is located in Orange County, where less than 2% of the population is Black.

The theme was inspired by 1 Thessalonians 5:6, “So then let us not fall asleep as others do, but let us keep awake and be sober,” Mackenzie added. It implies, “How do we keep awake and how do we go forward together, fostering, nurturing a collaborative relationship among all in the African diaspora, and begin unifying our community?”

Conference worship and music will reflect that diversity, according to Annette Buchanan, former Union of Black Episcopalians national president, who recently was elected to the board of the Episcopal Church Foundation. A conference priority, she said, has been deepening lay and clergy partnerships and empowering youth and young adults.

Casey Jones, 27, also a planning team member, applauded the inclusion of the laity. “The reality is, our lay leadership is an important component of the church, our first calling, our most important reality. There are many leaders within the diaspora who are not wearing collars. It doesn’t make sense to exclude voices like theirs.”

Jones, who hails from Columbus, Georgia, said he was confirmed in The Episcopal Church in college, while “seeking a space of authenticity and sincerity and integrity after having my faith challenged. I haven’t looked back, but have continued to find opportunities to grow.”

He is a member of Byrd’s council of advice, and is serving a Jubilee intern year at St. Stephen’s Church in Hollywood, in the Episcopal Diocese of Los Angeles.

Jones said, “I’ve been able to learn through service. My eagerness to serve and the opportunities presented have aligned themselves. I’ve felt most supported by folks being gracious enough to give me opportunities to learn and grow and to walk with me and to allow me to make mistakes, but always continuing to invest in me and believe in my leadership.”

He also serves as the national UBE’s young adult representative, chairs its Youth and Young Adult Committee and is vice president of the H. Belfield Hannibal UBE Chapter in Los Angeles.

For Byrd, the conference is about breaking down walls, “both within our community and outside our community.”

Breaking down walls within the community includes finding avenues for collaborative ministry to face challenges such as the disproportionate impact on communities of color of poverty, the pandemic, excessive policing and mass incarceration.

It also involves sheer numbers. While Blacks constitute about 6.3% of The Episcopal Church’s membership, they represent about twice that number in the US population. “We are a small number, but a powerful force,” Byrd said.

In addition to the laity, white allies are also invited to register for the conference’s third day, he said. The conference is free and will include networking and fellowship opportunities.

Deepening relationships within the diaspora also include recognizing both commonalities and differences. The use of the word “Black” as a descriptor for people of African descent, for example, may feel more meaningful to some communities than to others, he said.

“Missional entrepreneurial ministry means going beyond the walls of the church to participate in the school board, the city council and various other agencies within our community, if we’re going to effect change,” Byrd said. “And that, to my mind, is the ultimate form of evangelism.”