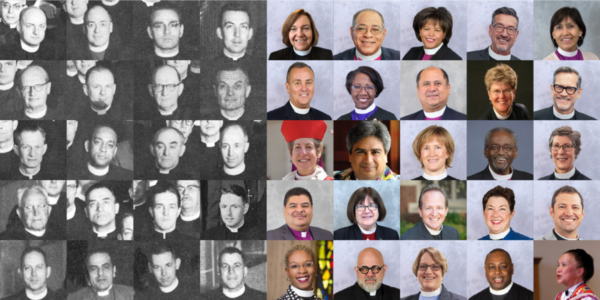 [Episcopal News Service] At the 2018 General Convention, a series of resolutions directed the church to gather demographic data about clergy as part of the Becoming Beloved Community initiative on racial equality and justice. As that topic takes on increasing importance in church life, the Church Pension Group’s effort to learn more about the diversity of the clergy is underway.

The Church Pension Group, the financial services organization that also serves as the recorder of ordinations for The Episcopal Church, is encouraging all active and retired clergy to log on to their profile on CPG’s website and add their race, ethnicity, gender identity and sexual orientation. Demographic information like this has never been collected by CPG before, though CPG does analyze clergy compensation by gender, and those reports have consistently shown a pay gap between male and female clergy. (Other gender expressions have not yet been included.)

The new data could reveal whether similar pay gaps – including disparities in deployment and stipendiary status – exist along other demographic lines, as well as the prevalence of various demographic groups within the clergy.

“There’s an image of who and what The Episcopal Church is that may not conform to the actual reality of who and what we are today,” Presiding Bishop Michael Curry said in a statement to CPG. “Having data helps to inform us in terms of both who we are and who we want to be. Data has a way of dispelling myths.”

Having demographic data on clergy will help the church assess how well it reflects both its congregants and the wider communities it serves. The most recent demographic study of American Episcopalians, done by the Pew Research Center in 2014, indicates that the church in the U.S. is 90% white, making it far less diverse than the U.S. population. That has prompted broader efforts to understand the role of race in the church, which is a key component of the Becoming Beloved Community initiative.

“If we seek reconciliation, healing, and new life, it begins with telling the truth about The Episcopal Church’s racial composition, especially given the church’s relationship to the complex history of race in the 17 nations our church calls home,” the Becoming Beloved Community framework says. Although a full census of church members is not planned, a racial audit of church leadership is underway and is expected to be presented to General Convention in 2021.

In the meantime, CPG is relying on clergy to voluntarily input their demographic information, which will be analyzed in aggregate form; individual demographic classifications are confidential and will not be made public in any form. So far, about 1,100 clergy have participated – about 10% of active clergy, according to CPG.

“We are delighted to support The Episcopal Church’s Becoming Beloved Community initiative,” said Mary Kate Wold, CEO of CPG. “As a more fulsome demographic picture emerges, the church will be in a better position to examine trends and respond to inequalities.”

“This part of Becoming Beloved Community is creating a wider road towards that place where all are counted as people on the way,” the Rev. Clayton Crawley, CPG’s executive vice president and chief church relations officer, said in a statement. “Black, white, gay, straight, male, female, non-binary – any of those labels and the multitude of others can be isolating on their own, but taken together, bound together, we form the Body of Christ in the world and it is marvelous to behold.”

The new demographic data is expected to be included in the 2020 clergy compensation report, although the amount of data depends on how many priests, deacons and bishops choose to share their information. Curry and other church leaders like the Rev. Stephanie Spellers, the presiding bishop’s canon for evangelism, reconciliation and creation care, are encouraging clergy to participate so the church can have a clearer idea of where it stands and what work needs to be done.

“As a woman of color, I am so grateful that my church is now asking about the racial identity and the gender identity of clergy,” Spellers said. “By sharing this information, we are taking part in a greater process that’s going to help us to become more just, to become more whole, to better reflect the dream of God.”

“If our vision is to reflect the vision of Jesus, we need to know how close we are to it. Having a picture will help us understand how we are doing on the journey to looking like God’s Beloved Community,” Curry said.