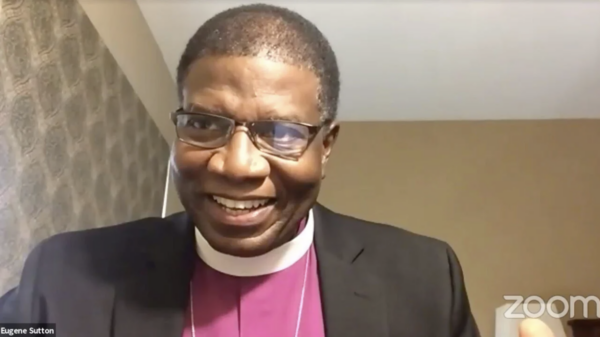 [Religion News Service] The Episcopal Diocese of Maryland has already received more than $100,000 in donations for its fund, announced last month, for reparations for the historic mistreatment of African Americans.

Bishop Eugene Taylor Sutton, the diocese’s leader, revealed the amount during a panel discussion on reparations held Oct. 13 as part of the National Council of Churches’ virtual Christian Unity Gathering.

“The community said, ‘Oh, a church group is doing something. I want to get behind that,’” he said, describing reaction to the $1 million fund that was approved in September.

“Checks are coming and we’re not even in a fundraising mode. But people want to say, ‘I want to do something. I want to put some dollars to something that’s going to make a difference in the impoverished Black community.’”

The NCC panel highlighted the growing interest in church circles in reparations more than 50 years after civil rights activist James Forman issued “the Black Manifesto,” demanding that white churches and synagogues pay $500 million for the mistreatment of African Americans.

The NCC panel featured religious leaders, from the Moravian Church to the United Church of Christ, who urged cross-racial, national and global efforts to continue to study and seek reparations.

“Slavery is theft,” said NCC President Jim Winkler. “Reparations for enslavement is biblical,” he said, citing the Book of Deuteronomy, which states, “And when you send a male slave out from you a free person, you shall not send him out empty-handed.”

Rep. Sheila Jackson Lee, a Democrat from Texas, who has worked since 1989 to pass H.R. 40, legislation to create a U.S. commission on reparations, urged religious leaders to join that cause in a prerecorded video message.

Several leaders said church officials need to be more courageous and more willing to partner with people of different races and groups outside the church.

The Rev. Brenda Girton-Mitchell, co-chair of the NCC’s ACT Now! to End Racism Initiative, said churches should “look at where our dollars are going” and consider partnerships with Black and other minority businesses.

“I think we’re moving in the right direction and this time last year I wouldn’t even have imagined that this conversation could take place,” she said.

“My plea is, let the church take the lead on this, not be followers,” he said. “You can do a bold thing and you won’t fall apart. You will thrive.”

This story is republished with permission from Religion News Service.