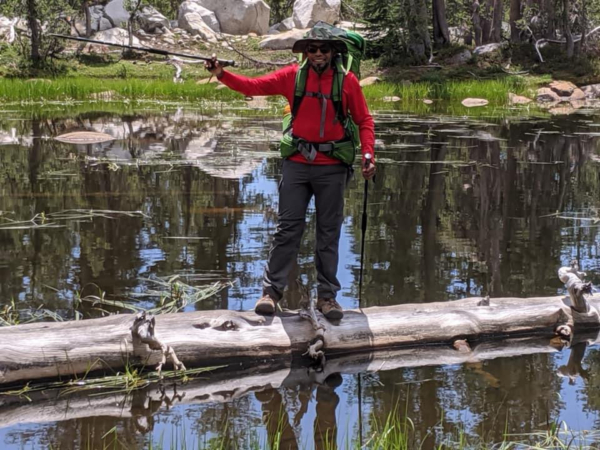 Renee Lopez stands on a log in Jewel Lake, California. After leaving the Elmwood Correctional Facility in Santa Clara County, California, he joined Saint Andrew’s Episcopal Church in Saratoga, which had ministered to him in jail. He now is a confirmed Episcopalian and a Saint Andrew’s vestry member. Photo courtesy of Peggy Bryan

[Episcopal News Service] Locked up in Elmwood Correctional Facility in Santa Clara County, California, Renee Lopez was a little annoyed when fellow prisoner Jack Fanning signed him up for a religious class without asking him.

Today, he couldn’t be more grateful.

Saint Andrew’s Episcopal Church in Saratoga, which led the class, continued to support Lopez, 43, after his release three-plus years ago. As soon as he could, he joined Saint Andrew’s. He was confirmed into The Episcopal Church and now serves on the vestry and as part of the leadership team for the church’s Stepping Stones Gathering, a reentry ministry for those formerly incarcerated that Fanning co-founded after his own release.

“Without that community, I [would] quickly go back to doing the things I was doing before,” Lopez said. “This community has given me the life that I envisioned when I was locked up.”

Providing support and the chance for transformation for men like Lopez and Fanning is a key element of service ministries at Saint Andrew’s. For the past seven months, that work has continued with participants inside and outside Elmwood despite the COVID-19 pandemic and the resulting suspension of in-person worship and jail visits.

Elmwood is part of the Santa Clara County (“Silicon Valley”) jail system, the fifth largest in California with a capacity of 4,500 prisoners.

A superior court judge surprises Renee Lopez with a gavel-dropping ceremony during a Stepping Stones worship service to mark the end of Lopez’s probation. Screenshot courtesy of Peggy Bryan

Pre-pandemic, Saint Andrew’s led weekly worship and Bible study for men inside Elmwood. The Rev. Peggy Bryan, the church’s associate rector for outreach and Stepping Stones leader, provided pastoral care. Parishioner Katy Dickinson, Education for Ministry coordinator for the Diocese of El Camino Real, facilitated classes in the country’s first jail-based EFM program. When prisoners were transferred from Elmwood to a state prison, the church commissioned them as “ambassadors of the gospel” and provided continuing encouragement and Christian formation through letters, phone calls, packages and visits.

“There’s a whole lot you can really do inside to engage them and preach a lesson in love,” Bryan said. “They hear the message of hell, brimstone and judgment [from others]. We bring them a whole different picture.”

But that wasn’t enough, she said. “I want to see their lives transformed when they get out. That’s the hard part. It’s too easy just to focus on the people inside. … Let’s do what’s hard, and let’s get them involved in our lives outside in our ministry, in our parish. Let’s do whatever we can to walk with them to real transformation.”

They began inviting former prisoners to attend the church. They deepened connections with the men and their families. On Oct. 13, 2018, they launched the “gathering,” a satellite worship service offered in partnership with Grace Baptist Church in the urban corridor of San Jose, significantly closer than suburban Saint Andrew’s to the halfway houses and other places where the men lived.

The $98,000 program is launching as an independent nonprofit called Hope Inside/Out that incorporates Stepping Stones and hopes to add more services, including reception centers to house former prisoners. It also has applied for a $40,000 New Episcopal Communities Harvest grant.

About 30 people – former prisoners and people in recovery, members of both churches and some college students – were attending the service in San Jose each Sunday when the pandemic forced the service online. Now, 40 to 50 attend, including men who connect to Zoom via 15-minute phone calls from the jail and one former prisoner deported to Mexico.

Leaving Elmwood, Fanning, now 51, couldn’t wait to reconnect with Bryan and with Cathy Holley, who played guitar during the jail worship services. He first met them in 2016, worshipping in a mop closet – “they called it a multipurpose room, but it smelled like dirty mops.”

“Because I lived in a dorm setting, that was my way to get some sense of peace in my heart,” he said. “Along the way, my faith grew. The hope grew.”

When he was released and came to Saint Andrew’s, the community embraced him. “I’m a young man that has tattoos every place, and I don’t normally fit anywhere in today’s ‘society,’ especially in a faith community,” Fanning said. “That was so big, to be able to fit without any exceptions.”

He joined the church’s efforts to launch Stepping Stones and find an accessible worship location. The goal was to offer a place of compassion, community, family and spirituality, and to maintain connections with men in jail, so that, once released, “they know where their feet can land,” he said.

After spending time repeatedly behind bars over the last 20 years, Daniel Martinez, 51, appreciated being connected to a supportive community outside, he said in an interview via Zoom from Elmwood before his release this summer.

“Being in jail, though you’re with many people, you’re alone many times,” he said. Saint Andrew’s support “keeps us thriving. It keeps us knowing that there’s a world of people out there that want to help people such as ourselves.”

Housed in a dorm with 40-some men, Martinez and other prisoners studied the Bible daily using materials supplied weekly by Saint Andrew’s and held evening prayer circles. “It’s just what keeps us from that boiling point,” he said, noting that COVID-19 added to their stresses. “So many uncertainties; this is what keeps us together.”

Anticipating his release after 16 months in jail, he looked forward to continuing his Saint Andrew’s connection, which is, he explained, “a strong support system and a foundation that’s needed in order for me to go in any good direction.”

“I’m always at the verge of tears now, and it’s not tears of disappointment but for joy,” Martinez said. “It’s having people care for you and understanding what that means. … I got lost for a while. I’m learning just to reach out and ask for help, and it feels good.”

The men inspire each other.

“A lot of us have done time together for years,” said Richard Nunez, 40. “We’ve all seen each other at probably our best and our worst. So even one person doing better and doing well, it holds a lot of clout. … I saw Jack get better. I saw Renee get better. I wanted to do better. It’s like each one of us was able to get through to the other one.”

“Peggy and Cathy and everyone else … who came in there and ministered to us taught us that we were loved, that we weren’t forgotten, and we could turn this whole thing around,” Nunez said. “So when I got out, I wanted to come to Stepping Stones to show other people the same thing.”

Even when he started using drugs again, “they were still by my side,” he said. “They were still checking on me.” Ultimately, he quit using drugs and went through a rehabilitation program. Today, he’s part of the Stepping Stones leadership team and works for a caterer and a drug and alcohol residential program.

For Bobby, Stepping Stones constitutes a second family. (His last name is withheld to protect his safety in jail.)

“I can’t tell you in simple words how it has helped me. I can only say that it has saved me,” he said in a Zoom interview from Elmwood. Stepping Stones brought him from “a very dark place … to the light.”

He participates in the Sunday online worship and studies with others behind bars. The only way to show his gratitude is to keep the program going in Elmwood while the volunteers can’t come in, he said. “We’re just filled with so much love, so much hope. Without Stepping Stones, I don’t know where we would be.”

Gerry Chartrand, who provides healing prayers during worship, said she was “scared to death” the first time she entered the jail. “After my first visit, I felt like I had gone to a beautiful, wonderful church filled with loving people and I’ve loved every bit of it.”

“It’s terribly isolating to have your loved one go to jail. It puts you in Oz. It’s not like you can go to your neighbor and say, ‘What did you do’” in these circumstances, Clifford said. “It’s really important that you can find people that can walk you through. To be able to find people like Jack and Renee and Richard, who can give me a hug … and say, ‘He’s going to be OK, he’s going to find his way,’ – those things are just incredible.”

Stepping Stones has led to celebrations – both typical liturgical occasions, such as the baptisms of Clifford and Fanning and confirmation of Lopez – and less-typical ones. Because of the COVID-19 shutdown, Lopez never went to court to see a judge bang a gavel to signal his release from probation.

“I feel like I missed out,” he said. But two weeks later, on his birthday, the Stepping Stones community surprised him with a visit from a county superior court judge, who performed the gavel dropping during the group’s Zoom worship service.

“I’ve never been so emotional,” Lopez said. “I felt so loved in that moment, that this community went out of their way to give me that moment.”

Friends who attended “were crying,” he said, telling him, “Those people love you.”

Concluded Clifford, “Family comes in all sorts of forms, and we’re just really blessed that we found one another in this space.”

– The Rev. Sharon Sheridan Hausman is a freelance writer and a priest in the Diocese of Newark.