[Episcopal News Service] It was inevitable, heading into the October meeting of Executive Council, that the coronavirus pandemic would color much of the work of the church’s governing body. Cases of COVID-19 are still on the rise in the United States and worldwide, and some dioceses and their congregations are struggling with decreased revenue as the virus and precautions to slow it upend parish life.

Over Executive Council’s four days of online sessions, Oct. 9-12, the pandemic’s impact on church operations and finances was evident in ways big and small. In one of its most significant moves, Executive Council approved The Episcopal Church’s 2021 budget on the final day of the meeting, after a debate over staff cost-of-living adjustments and financial relief to dioceses.

The pandemic also has affected planning of the church’s triennial General Convention. The 80th General Convention, which had been scheduled for July 2021 in Baltimore, Maryland, could be moved online or postponed. It will be up to the church’s presiding officers, after consulting with Executive Council, to make that call.

“We can expect a decision in November, so stay tuned,” said the Rev. Michael Barlowe, secretary of General Convention.

Some of the other resolutions and discussions at this Executive Council illustrated how thoroughly the ground has shifted under the church since the pandemic took hold in mid-March, forcing suspension of in-person worship and face-to-face activities. With much of the work of the church moving online, church leaders are grappling with fundamental questions about how to assess congregational life today and plan for the future.

Such questions weighed heavily in the Rev. Chris Rankin-Williams’ Oct. 10 presentation to Executive Council about changes to the parochial report forms that congregations and dioceses submit each year. Data from the parochial report is intended to provide a summary of the year and help gauge trends in church vitality, but “2020 has been a bit of a pile-on year,” Rankin-Williams said.

He serves as chair of the House of Deputies’ Committee on the State of the Church, which had been working on a revised parochial report even before the pandemic. For 2020, the committee recommended a special edition of the parochial report that partly treats this year as a statistical anomaly. 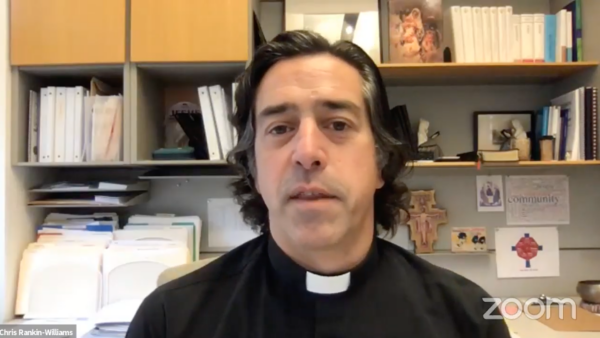 The Rev. Chris Rankin-Williams, chair of the House of Deputies’ Committee on the State of the Church, speaks to Executive Council on Oct. 10 about parochial report revisions.

In the special report, average Sunday attendance, one of the church’s most prominent metrics, will reflect only the number of people who attended in-person worship from Jan. 1 to March 1. New questions, under the heading “Worship During the Pandemic,” will require congregations to say whether they’ve worshipped online and, if so, what platform they used. They also will be asked to report what metrics they used, if any, to track online participation. Standardized methods for counting online traffic may be recommended in future revisions to the parochial report.

“Churches are doing amazing stuff and facing some really incredible challenges,” Rankin-Williams said. Some congregations are thriving online, while others soon may be at risk of closing down because of the pandemic’s disruptions, he said.

The special report for 2020 will include new narrative questions to help track “opportunities, innovations and challenges” that congregations experienced while dealing with the pandemic. Racism is another new section in the report, with congregations asked to discuss how they are “actively addressing and working toward racial justice and reconciliation.”

Such narrative questions will preview a new approach to future parochial reports, as Rankin-Williams’ committee responds to complaints that the past emphasis on numbers misses other examples of church vitality and Episcopalians’ participation in the Jesus Movement.

“As a rector, my concern is not primarily with a report that tells me what happened but is something that the leaders of my church can use to make decisions for the future,” Rankin-Williams said. He serves at St. John’s Episcopal Church in Ross, California, north of San Francisco.

After the presentation, the Rev. Gay Clark Jennings, president of the House of Deputies, led off a Q&A session by thanking the committee for responding so quickly “to the current realities to this global situation and the situation we’re facing in the church today.”

Those realities dominated deliberations by Executive Council’s Finance Committee over the budget and other church finance resolutions.

The Episcopal Church’s finances are relatively stable, Treasurer and Chief Financial Officer Kurt Barnes told the committee, thanks in part to cuts made by departments of the Domestic and Foreign Missionary Society, or DFMS, the church’s corporate entity. The DFMS also received a $3 million loan from the federal Paycheck Protection Program that could be converted into a grant if the church succeeds in meeting the program’s criteria, such as keeping workers on the payroll and maintaining salaries.

The 2021 budget estimates $45.9 million in income and $47.1 million in expenses. Despite a single-year deficit, the church budgets on a three-year cycle, with surpluses and deficits balancing by the end of the triennium.

Since it remains unclear whether General Convention will be held in 2021, departments separated about $3.8 million in convention expenses, to be put in reserve. For the remaining expenses, church planners are assuming a gradual return to pre-pandemic spending levels but will make cuts if income doesn’t match projections.

Even so, several Executive Council members raised concerns that some dioceses and congregations face a bleaker financial outlook, which they said should be reflected in the 2021 budget. A proposal to include up to 3% in cost-of-living adjustments for DFMS staff members was singled out for scrutiny.

“How do I vote to pass this when I know other people are suffering?” Louis Glosson, a member from the Diocese of San Diego, said when the budget was proposed for a vote on Oct. 12.

“In these difficult times, we have dioceses and we have congregations that are unfortunately laying people off, have already told staff members that there will be no cost-of-living raises for them,” said Konieczny, who retired this year as bishop of Oklahoma. “I just think it sends a very poor message to the rest of the church.”

The Rev. Mally Lloyd, who chairs the Finance Committee, noted that the budget will allow senior church officials to reduce next year’s cost-of-living raises if the financial picture worsens by the end of this year. She also emphasized that the committee chose to add $1 million in diocesan relief through the assessment waiver process to fully fund grant programs that benefit dioceses.

Presiding Bishop Michael Curry also spoke in favor of the proposed budget, including the cost-of-living adjustments and the promise of additional diocesan support.

“This council is putting forth $1 million in relief for our dioceses through the assessment waiver process,” Curry said.

After other members questioned how the cost-of-living adjustments would look to others around the church, Executive Council voted to move into executive session, which closed the rest of the debate from public view. No reason was given for that motion, though Diane Pollard, a member from the Diocese of New York, said she was “uncomfortable” continuing the discussion with DFMS staff present.

Executive Council remained in executive session for 28 minutes. After returning to open session, Curry requested a brief break, and when members returned from the break, they approved the 2021 budget without further discussion. The approved budget included the DFMS adjustments of up to 3% and the additional $1 million for assessment waivers.

And about $87,000 in “rapid response” grants will support an additional 16 ministries aimed at promoting racial healing as part of the church’s Becoming Beloved Community initiative. The first round of 17 grants totaling $100,000 was approved in June after the killings of George Floyd, Breonna Taylor and Ahmaud Arbery.

“The amount of grant applications we received was wonderful and overwhelming and telling of just how deeply committed people of the church are to doing this work,” the Rev. Edwin Johnson told the Finance Committee on Oct. 9. Johnson serves as chair of the Presiding Officers’ Advisory Group on Beloved Community Implementation, which received 89 applications for the two rounds of grants.

In another financial matter, Executive Council, which includes Honduras Bishop Lloyd Allen as a member, approved an emergency financial assistance plan for the Diocese Honduras, which cited hardships caused by the pandemic. The plan will forgive $163,000 in church loans to the diocese and provide an additional $75,000 if the diocese fulfills certain requirements, including selling a storage facility and catching up on its pension payments.

Executive Council also reviewed and endorsed churchwide guidelines drafted by the Archives of The Episcopal Church on updating gender references in church records to reflect sensitivity to the transgender community.

And Executive Council approved the latest move in the ongoing efforts to find a new home for the church archives, now based in Austin, Texas. Until a permanent location can be determined, the archives will seek a five-year lease on an interim site. Potential locations and terms of the lease were discussed in executive session and not identified in the final resolution.

Executive Council, which serves as the church’s governing body between meetings of General Convention, has 40 voting members, including the presiding bishop and House of Deputies president, as well as additional nonvoting members, such as the Episcopal Church’s finance director.

Twenty of the voting members – four bishops, four priests or deacons, and 12 laypeople – are elected by General Convention to six-year terms, with half of those members elected every three years. The other 18 are elected to six-year terms by The Episcopal Church’s nine provinces, with each province sending one ordained member and one lay member.

Barlowe indicated that Executive Council likely will schedule another meeting in November to discuss various pressing issues, including General Convention. In the meantime, Executive Council at this month’s meeting passed amendments to its bylaws aimed at making online meetings more productive, while affirming that physical meetings are preferred.

The amendments will require committees to meet at least once before each full Executive Council meeting to discuss proposed resolutions and submit those resolutions at least 15 days in advance, so they can be translated into Spanish in time to be reviewed by all members.

“These amendments take seriously our commitment to operating as a bilingual body,” Russ Randle, a member from the Diocese of Virginia who serves on the Governance & Operations Committee, said Oct. 10 when presenting the amendments. They passed despite some concerns that the changes could create additional burdens for the committees.

“I think one of the things we can be mindful of is it’s OK to experiment and live with something and see if it needs to be refined,” Curry said. 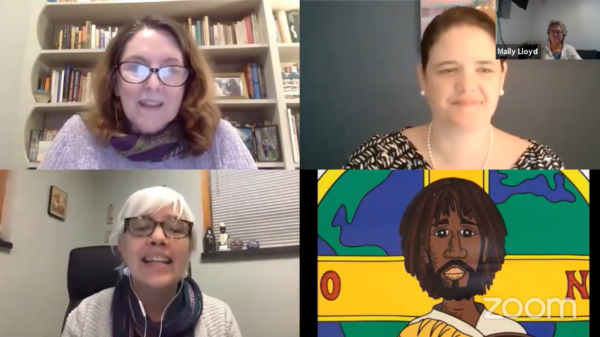 Clockwise from bottom left, the Rev. Anne Kitch of the Diocese of Newark, North Carolina Bishop Suffragan Anne Hodges-Copple and Andrea McKeller of the Diocese of South Carolina sing “I Have Decided to Zoom With Jesus” on Oct. 12, the final day of Executive Council’s meeting on Zoom.

Executive Council had intended to hold at least one in-person meeting in each of the church’s nine provinces during this triennium, but since March, it has gathered exclusively online, relying on Zoom for both video meetings and votes on resolutions.

One of the final notes at this Executive Council was a lighthearted one. Lloyd concluded her presentation from the Finance Committee by introducing a video of “The Finance Singers,” featuring North Carolina Bishop Suffragan Anne Hodges-Copple, the Rev. Anne Kitch of the Diocese of Newark and Andrea McKeller of the Diocese of South Carolina.

The video featured the trio performing a rendition of their pandemic-ready hymn, “I Have Decided to Zoom With Jesus.”