[Episcopal News Service] The Episcopal Church’s Executive Council gathered online Oct. 9 to open its fall meeting, with church leaders invoking the themes of darkness and light as they highlighted Episcopal responses to the coronavirus pandemic, racial injustice and political polarization ahead of the Nov. 3 U.S. presidential election.

Members also began reviewing the church’s financial position in preparation for discussion and approval of the 2021 church budget, a core annual responsibility of Executive Council that this year comes as the pandemic has disrupted diocesan and churchwide finances. Church planners face the additional challenge of accounting for the 80th General Convention. The triennial churchwide gathering is scheduled for next summer in Baltimore, Maryland, but presiding officers are still discussing contingency plans because of the pandemic.

A decision on when and how to proceed with General Convention is not on the agenda of this Executive Council meeting, which runs through Oct. 12, though plenty of other notable topics are listed, including new spending on racial reconciliation initiatives, the incorporation of gender-inclusive language in church records, and potential revisions to the venerable parochial report, which collects data on Episcopal congregations.

Presiding Bishop Michael Curry, echoing remarks he made last month at a meeting of the House of Bishops, affirmed the church’s nonpartisan role in bringing Jesus’ message of love and light into the public sphere, especially with elections just weeks away.

“We are meeting in the midst of some pretty difficult times,” Curry said, but the Gospel teaches that Christians can be a light against that darkness. “Now is not the time to hide this light under the bushel. Now is the time to lift up this light … this light that we’ve gotten from Jesus, and let it shine, even, and in spite of, whatever may happen around us.” 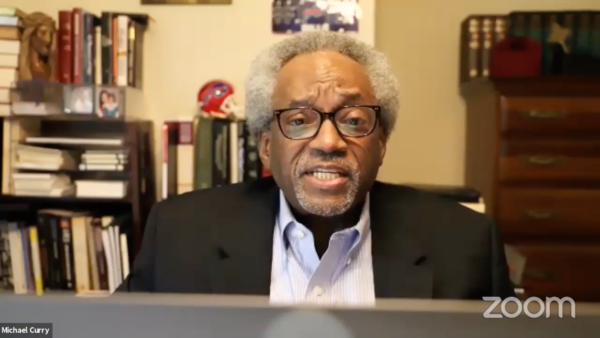 Presiding Bishop Michael Curry offers opening remarks Oct. 9 at the fall meeting of Executive Council, which is being held online.

Curry, speaking for a little over 15 minutes, outlined several examples of church initiatives aimed at countering political division with prayer and pastoral presence:

Individual Episcopalians are invited to take advantage of some of the online resources that church staff have curated, Curry said, and they can simply join other people in faith by praying often.

“Don’t underestimate the power of prayer,” Curry said. “Pester the Lord. Tell him I said so.”

The Rev. Gay Clark Jennings, president of the House of Deputies, opened her remarks by saying she was looking forward to welcoming the Rev. Chris Rankin-Williams on Oct. 10 for his presentation to Executive Council about parochial report revisions. Rankin-Williams, as chair of the deputies’ Committee on the State of the Church, is leading efforts to update the report’s format to better reflect today’s church.

Jennings spent most of her 10-minute address highlighting a pivotal piece of Episcopal history: Oct. 12 will mark 50 years since General Convention in 1970 approved women to be seated as members of the House of Deputies. That year, 29 women became deputies, Jennings said, but many of them have never been formally memorialized at General Convention, something she hopes to correct at the convention’s 80th meeting.

Like Curry, Jennings said the church is in a unique position to be a moral voice in these troubling times, especially with misinformation running rampant.

“These are sobering times in which to live and witness to the Gospel,” Jennings said. “Truth matters. Voting maters. History matters. May God grant us wisdom and courage for the facing of this hour.”

Executive Council has 40 voting members, including the presiding bishop and House of Deputies president, as well as additional nonvoting members, such as the Episcopal Church’s finance director and chief operating officer.

Twenty of the voting members – four bishops, four priests or deacons, and 12 laypeople – are elected by General Convention to six-year terms, with half of those members elected every three years. The other 18 are elected to six-year terms by the Episcopal Church’s nine provinces, with each province sending one ordained member and one lay member.

Curry and Jennings issued a statement in June saying that Executive Council eventually would be asked for input on how to proceed with the 80th General Convention. COVID-19 cases still are on the rise in the United States and worldwide, and a vaccine isn’t expected to be widely available until 2021 at the earliest. More than 210,000 people have died in the United States alone.

An Episcopal task force is considering options ranging from an online General Convention to postponement, and it will issue a report to the Joint Standing Committee on Planning and Arrangements. The committee will make recommendations to Curry and Jennings, who will make their decision with “advice and consent” from Executive Council, but it remains unclear when an announcement will come.

In the meantime, budget discussions are taking center stage at this meeting. Kurt Barnes, The Episcopal Church’s treasurer and chief financial officer, told council members that churchwide departments were asked to separate General Convention expenses from their overall budgets so that those amounts could be put in reserve for 2021 or whenever the next General Convention is held.

Despite such uncertainty and other impacts of the pandemic, churchwide finances have been relatively stable, Barnes said. As of August, the amount collected in diocesan assessments was higher than in past years, while program revenue was down because of canceled events.

A $3 million loan obtained by The Episcopal Church as part of the federal Paycheck Protection Program is helping to cushion any overall shortfall, and “we are absolutely convinced that it will be converted from a loan to a grant,” Barnes said, referring to provisions available to all employers who qualified for the federal loans.

The Rev. Mally Lloyd spoke briefly on behalf of Executive Council’s Finance Committee to highlight a few additional financial details. The committee will use pre-pandemic 2019 figures as the baseline for developing the 2021 budget proposal, she said, with an assumption that travel, face-to-face meetings and other church expenses will begin to return to normal next year.

The church’s three-year spending plan that runs through the end of next year also includes a “cost of living” raise for employees of the Domestic and Foreign Missionary Society, or DFMS, the church’s corporate entity. In 2021, the raises would be 3%, and Lloyd said the committee has received “some pushback” from dioceses that have had to freeze their salaries because of revenue crunches.

Lloyd didn’t suggest changing the amount of the DFMS raise, but Executive Council might consider increasing the amount of money set aside for assessment waivers, in case more dioceses than expected claim financial hardship.

Heading into this year, an overwhelming majority of dioceses had committed to paying their fair share, while 17 were granted waivers. Barnes said letters were sent earlier this year to dioceses, asking them about their 2021 assessments, and so far, 20 dioceses have responded, all of them saying they will pay the full amount.

Before breaking into committees, Executive Council concluded its opening-day plenary session with all members by listening to churchwide and diocesan examples of racial reconciliation work as part of the Becoming Beloved Community initiative. Rose Sconiers discussed efforts in the Dioceses of Western New York and Northwest Pennsylvania, while Diane Pollard shared examples from her work with the Diocese of New York’s Anti-Racism Committee.

The Rev. Stephanie Spellers, the presiding bishop’s canon for evangelism, reconciliation and stewardship of creation, provided an overview of churchwide efforts. “Sacred Ground,” a 10-part video-based discussion series on the historical roots of racism, “has become one of the most important offerings across our church for the work of racial justice an healing,” she said, noting that more than 1,200 discussion circles have formed in less than two years.

Becoming Beloved Community Now, a three-part webinar series, also was a big hit earlier this year, she said, and video replays are available online. And she praised the work of dioceses and congregations at the local level, some of which were detailed in the results of a survey of racial justice ministries around the church.

“Since the murder of George Floyd, Episcopal churches and dioceses and individuals have been engaged in even deeper reckoning than before, and it has been an extraordinary thing for many of us to witness and take part in,” Spellers said.