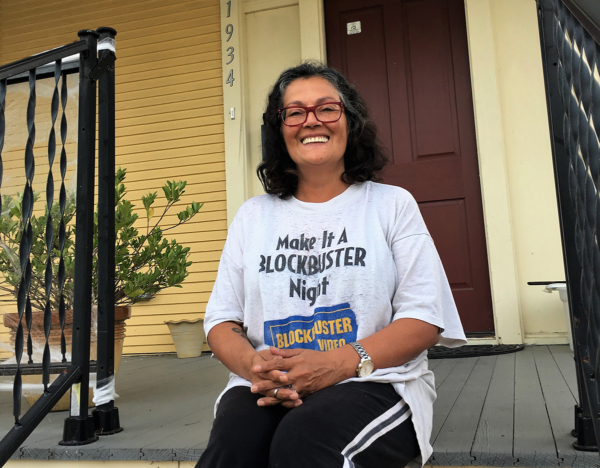 First-time homeowner Evelyn Carlton, once a homeless veteran, sits on the front porch of the home she was able to purchase through Jericho Road. Photo courtesy of Jericho Road Episcopal Housing Initiative

“When I first saw the house, I thought, ‘This would be awesome.’ I loved the fact that it was new construction,” said Stewart, recalling the narrow, rectangular three-bedroom house. “It was exciting times, to actually own a piece of property, to purchase my first home.”

Now, a dozen years later, that initial purchase has propelled Stewart, 36, on a path to generational wealth-building that enabled him in 2018 to move his growing family into a larger home, a goal that has eluded many low- and moderate-income families, Nicole Barnes, Jericho Road’s executive director, told Episcopal News Service.

“A lot of our families have only been in a rental situation, even in their parents’ lives,” Barnes said. Although this year marked the 15th anniversary of Katrina, “we are still in recovery.”

The affordable housing nonprofit was created in response to Katrina in 2006 as an institution of the Diocese of Louisiana. Its offices sit on a divide between the multimillion-dollar mansions of New Orleans’ upscale Garden District to the south and the historically disinvested Central City neighborhood to the north.

“As we moved into the early recovery after Katrina, we started to look at the community behind the cathedral … an historically underserved neighborhood with a lot of renters,” recalled the Very Rev. David duPlantier, dean of Christ Church Cathedral and Jericho Road board chair. “We weren’t sure how much livable property was there, but it seemed logical that the working Black community who had lived there might come back there first.”

Katrina left 80% of the city flooded, but not Central City, which later attracted developers and inflated land values. The land speculation, along with the COVID-19 pandemic, has complicated long-term recovery efforts, Barnes said.

“In New Orleans, our economy is heavily based on tourism, and a number of our homeowners work in tourism or ancillary industries,” she said. “We’ve also had the added pressures of extreme housing costs. There was a lot of speculation; that put a lot of pressure on the market.

“So we’ve had housing costs that were at least twice what they were before Hurricane Katrina, and wages haven’t gone up a lot,” Barnes said. “Because of COVID-19, we’ve been stagnant in tourism. We’ve seen a housing crisis that is still very much in play here and not just because of the storm anymore.”

Beyond ‘sticks and bricks’ to transformation

In the years since Jericho Road was created with an initial $2.3 million seed grant from Episcopal Relief & Development, the nonprofit agency has built or renovated 70 homes for families, Barnes said. Its acquisition of Project Home (another nonprofit housing agency) and its construction crew expanded Jericho Road’s reach beyond Central City, and it later launched additional programs to support struggling residents.

In a city where in 2017 about 60% of renter-occupied homes and apartments had a Black householder, compared to 34.7% for whites, homeownership is key to climbing out of poverty, Barnes said.

Historically, homeownership aids upward mobility, “yet it is just so far out of the reach of so many people, particularly communities of color,” she said. “Homeownership is the number one way we build assets in America. The way that people can start a business, send their children to college is to take out equity in their home. It is not just a shelter for your family. It positions you to be able to do things in a way that makes your family financially upwardly mobile, and that’s what’s so important about it.”

Yet New Orleans’ median yearly income per individual is about $36,000, compared to $53,482 nationally. Most Jericho Road homes are sold to first-time homeowners who earn less than 80% of the area’s median income, she said.

Additionally, “about 39% of tourism workers in New Orleans earn an average of $24,000 a year or less,” Barnes said. “If you had a house passed down to you from your parents that you own free and clear — think about how much farther that $24,000 would go toward your ability to take care of you and your family. This is not a luxury. It’s a necessity. It’s critically important.”

For Stewart at age 24, homeownership was an anomaly. Barnes recalled two agency clients who, at 55 and 56, “were first-time homebuyers. This had been their dream, something they never thought they could achieve.”

The process can take up to three years, and Jericho Road currently has 110 potential homeowners, including teachers, postal employees, tourism industry and municipal workers, and others who are routinely priced out of the housing market.

“Our housing crisis, in terms of affordability, has put pressure on folks who traditionally would have been great candidates for homeownership … [but who] pay 30-50% of their income just toward their housing costs,” Barnes said.

“When you talk about affordable housing, people have a tendency to think about it as ‘those poor people.’ That’s not the situation. The families that we help don’t make a whole lot of money. They work full-time jobs every day. Some have multiple jobs. There are multiple generations like this in a city where housing is not affordable.”

As post-Katrina public subsidies have dwindled, the agency has devised creative methods to navigate the shortfall. For example, local costs of land acquisition and new home construction can average about $230,000, nearly twice the qualifying mortgage amount for first-time low- to moderate-income homebuyers.

Through a reclamation project, Jericho Road purchases U.S. Department of Housing and Urban Development homes at a discounted rate and uses its construction crew to renovate them, getting clients into homes without their “needing multiple layers of assistance.” HUD homes are foreclosed properties that were originally purchased with Federal Housing Administration loans. Residential properties become HUD homes when homeowners are unable to keep up with their monthly mortgage payments and defaults on their loans.

Additionally, Jericho Road “has experimented with selling some market-rate homes — one, actually — so we can use the proceeds to help subsidize affordable homeownership,” Barnes said. In addition to its original Central City neighborhood, the agency now serves the nearby Gentilly, Algiers and Seventh Ward areas and has launched owner-occupied rehabilitation programs. Jericho Road has also ventured into the senior residence rental market.

But Jericho Road’s work “doesn’t end at the closing table,” Barnes said. “We developed post-purchase programs with families after we started to see that they needed resources to help acclimate them to homeownership.” More than 100 clients have received financial coaching to help close the racial wealth gap and foster financial mobility.

Partnerships with local community colleges and carpenter unions provide valuable training and certifications, as well as employment for residents through a workforce development program.

“We’re not just building homes, we are building communities,” Barnes said. “It’s not just sticks and bricks. We have to do all these other things to create a neighborhood that’s thriving.”

New Orleans is still in a delicate place 15 years after Katrina, said Stewart, whose original home was three blocks from Christ Church Cathedral in Central City. “Some neighborhoods are back in full bloom and thriving. But others have been carved out, suppressed. Some areas of the city just became desolate and are still like a ghost town.”

Yet Jericho Road “has sparked an evolution” in Central City, said Stewart, a former board member. “At the time that Jericho Road started building homes in Central City, the Census tract was one of the worst in the city. The investment they made, to construct new homes and bring families in, has drastically increased the property value and has given the neighborhood a sense of ability and purpose.”

Evelyn Carlton remembers when Central City was “an area where you roll up your windows, lock your doors and hit the gas to get through real quick.”

Now the once-blighted area is home to Carlton, a formerly homeless veteran. “I like the fact that families live here,” she told Jericho Road staffers in a previous interview. “People have a vested interest in what happens in this neighborhood.

“And I have the house that I absolutely adore and love. Sometimes, doing some of the work is hard, but it’s my house,” she said. “There is so much pride I get from that … saying it is my house!”

For Carlton and many Jericho Road families, “homeownership was never something they thought attainable,” Barnes said. “But this is their ‘forever and ever amen’ home, a way to create generational wealth to pass on to their children.

“They are resilient. They are doing whatever it takes to keep their homes. Right now, in the pandemic, we want to make sure our families are positioned to do whatever they need to do to maintain their homes at a crucial time. Housing is even more important at this point.”

– The Rev. Pat McCaughan is a correspondent for Episcopal News Service based in Los Angeles, California.