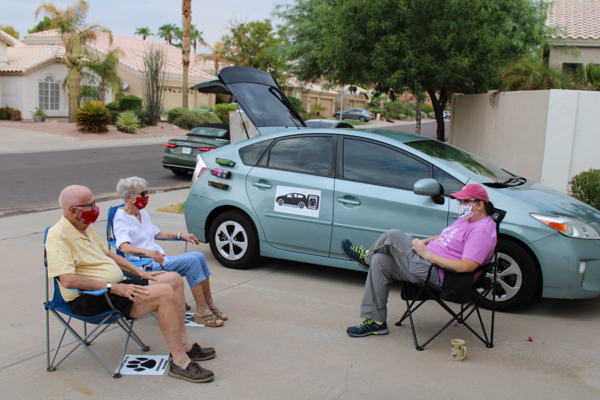 [Episcopal News Service] In the driveway of one of her parishioners, and with a cotton swab in her gloved hand, the Rev. Holly Herring applied holy oil to several Episcopalians, administering the anointing of the sick. For many, it was the first time they’d received any sacrament since COVID-19 forced churches throughout the country and the world to go on lockdown.

Among them was cancer survivor Bill Coleman, a parishioner at Trinity Cathedral in Phoenix, Arizona, where Herring serves as canon precentor. Although it wasn’t the Holy Eucharist, for him, “it’s another form of contact. … That’s the thing I miss the most about going to church.” 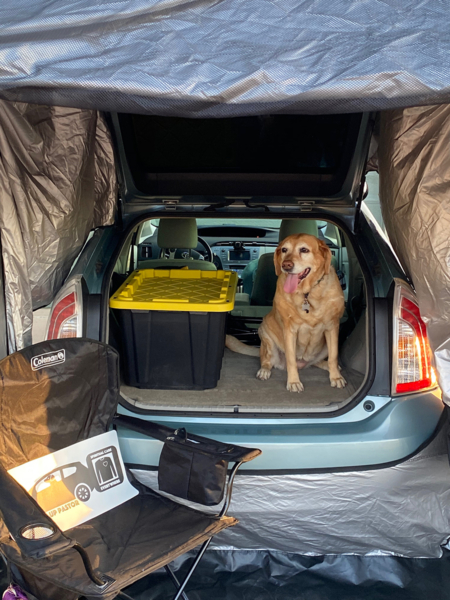 The Rev. Holly Herring’s dog, Siena (named for St. Catherine of Siena), tests out the pop-up tent for her person’s “Pop-up Pastor” mobile ministry Sept. 24, 2020. Herring plans to bring her canine companion along with her as the Arizona weather cools down. Photo: Courtesy of Holly Herring

Before receiving the sacrament, Coleman sought one-on-one counseling from Herring as they sat in socially distanced camping chairs placed outside her car. Since many churches are either still closed or limiting participation, Herring started “Pop-up Pastor,” an initiative to bring the church to the people.

“We’ve got a lot of people in our community, and I know a lot of people in the communities of my colleagues, who really are very isolated,” Herring told Episcopal News Service. “Zoom is great; telephone calls are great; emails are great; all of these things that we use as resources to connect with people, they’re wonderful in a time of pandemic, [but] they don’t speak to the need to actually see each other’s faces in real time.”

The ministry’s name derives from the pop-up tent she sets up behind her car and her pastoral role. The visits are not intended to be long-term or limited to Episcopalians; she wants to invite people to reconnect with their communities and faith, whatever tradition that may be, and refer them to those communities.

“I started thinking about how food trucks go into neighborhoods and feed people,” Herring said. “I thought, ‘Why am I waiting for the office to open? I should be out in the neighborhood like a food truck, feeding people in body, mind and spirit.’”

So far, Herring has set up shop in the Ahwatukee area in south Phoenix, outside of the cathedral in downtown Phoenix and to the north near Scottsdale.

“It was really a joy to see even the few people who came here today,” said Carolyn Warden, a member of Trinity Cathedral, who, along with her husband Jim, hosted Herring for a soft launch of the Pop-up Pastor on Aug. 30 outside their home. “We need each other. We miss each other. Moving forward with this ministry, once this pandemic is better understood and we’re able to be a little bit more mobile, I still think that there’s a place for this.”

Jim and Kay Shumaker, also Trinity parishioners, were among Herring’s first visitors seeking spiritual support. The couple from Sun Lakes, both in their 80s, have been unable to visit their son and his family during the pandemic because their age makes them more vulnerable to the virus and their daughter-in-law has an autoimmune disorder. 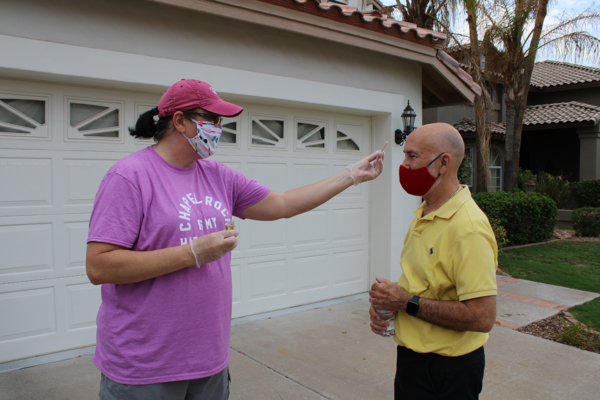 The Rev. Holly Herring, canon precentor at Trinity Cathedral in Phoenix, administers the sacrament of anointing of the sick to cancer survivor Bill Coleman during an outing of her “Pop-up Pastor” mobile ministry Aug. 30, 2020 in Ahwatukee. Photo: Tony Gutiérrez/ENS

“We’re really isolated from family, and we chatted about that,” Jim Shumaker told ENS. “Holly shared her experiences, and we commiserated back and forth.”

Kay Shumaker admitted that at one point, they had to get out of the house and “snuck out and didn’t tell any of our kids” to take a short vacation in northern Arizona.

“It was at that point we just had to get someplace where it was cool, and we had to get away from the four walls of the house,” she said. “But then you feel guilty. So then you talk about guilt.”

Drawing on her experience as a hospital chaplain, Herring allows time and makes space for people to arrive at their own solutions. She asks them how they’re going to care for themselves and allow others to care for them, and how they’re planning to “reconnect to the world in a world that has changed while you’ve been away.”

“Pastoral care is about listening intently,” Herring said. “Someone needs for me to say, ‘I hear you. I see you. How would you solve that?’ and then to let them solve it and go, ‘You know, that sounds like something that’s feasible. Why don’t you try that?’” 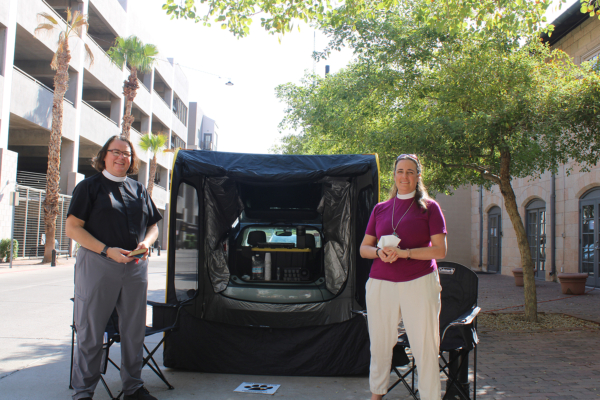 The Rev. Holly Herring, left, canon precentor at Trinity Cathedral in Phoenix, is joined by the Rt. Rev. Jennifer Reddall, bishop of the Diocese of Arizona, during an outing of her “Pop-up Pastor” mobile ministry outside the cathedral in Downtown Phoenix on Sept. 24, 2020. Photo: Tony Gutiérrez/ENS

The Pop-up Pastor grew out of the virtual ministries Trinity set up when the pandemic began in mid-March. Herring has chanted Compline every night and has invited laypeople to lead virtual morning and evening prayers online. Many parishes in the Diocese of Arizona have offered services online, and the diocese has highlighted one in English and one in Spanish at a different church each Sunday.

“I really miss being present in the same space,” said Courtney Ellish, a member of All Saints’ Church in central Phoenix. “I have done a few Zoom things and watched services online. There’s something that virtual space lacks, and that’s being present with somebody whom you can actually feel their presence rather than just see them.”

Ellish and her family have known Herring since 2014 when she served as a priest at All Saints’. Ellish shared with Herring how she’d just returned from moving her 15-year-old son Nolan, who served as an acolyte when Herring got married, to an Episcopal boarding school in Austin, Texas, where he’s a sophomore.

“We talked about some good things, some bad things that are going on, and some things that I asked her for some prayer for,” Ellish said. “Mother Holly also knows the rest of my family. She’s kind of a special person in our family.”

“I’m excited that she’s trying to find ways of caring for the people of God creatively in the midst of a pandemic and safely. This looks like a really great way to do it because you’re still distant, but you’re nearby,” Reddall told ENS. “We talk a lot about how the church needs to be outside the walls of our building. With the pandemic, nobody’s been able to be in the buildings, and so here’s a way of witnessing the love of Jesus out in the parking lots and in the neighborhoods where she’s been going.”

– Tony Gutiérrez is a freelance journalist based out of Cave Creek, Arizona.