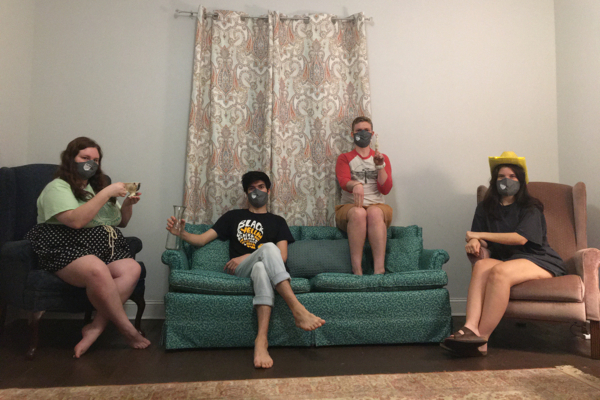 Members of the Johnson Service Corps, part of the Episcopal Service Corps network, had two weeks of “quaran-tation” in their houses in Durham and Chapel Hill, North Carolina, before they could begin their service work. Photo courtesy of Andrew Hudgins

[Episcopal News Service] After the coronavirus pandemic hit in mid-March, most of the local Episcopal Service Corps members were forced to complete their service work remotely under unexpected constraints because of the public health crisis.

And as the virus continued to spread throughout the United States during the summer and with COVID-19 cases still on the rise, coordinators initially weren’t sure how they were going to deploy a new round of participants this fall – and even questioned if enough people would be willing to serve. To their surprise, interest never waned. Episcopal Service Corps was able to recruit and accept a full corps of about 90 members, ages 21 to 32, who have begun serving a wide variety of community organizations from Boston, Massachusetts, to Seattle, Washington.

“Every program director came back and said, ‘We’re in,’” Wendy Karr Johnson, the Episcopal Service Corps coordinator, told Episcopal News Service, and “all the corps members come in knowing that we’re in the middle of a pandemic.”

Changes this year included a “quaran-tation” period – the typical two-week orientation but carried out under quarantine conditions. As they moved in together, corps members in each city were told to mask up and isolate at the same time as they were adjusting to the intentional communities that are a hallmark of Episcopal Service Corps’ programs. Some corps members leave the intentional communities and report to work, while others are completing their service work remotely.

“It is definitely very weird to not be meeting people in person and to not know what they look like,” Emlyn Doolittle, 23, told ENS. As a member of Johnson Service Corps in Durham, North Carolina, Doolittle reports to work for the Center for Responsible Lending each morning by walking over to the computer at the desk in his bedroom. He shares a house in the city with three other Johnson Service Corps members.

“The biggest change has just been in getting to know the city and my housemates,” said Doolittle, a San Francisco, California, native who graduated in the spring from Vassar College in Poughkeepsie, New York. He and his housemates arrived in mid-August and started their work after Labor Day.

As part of Episcopal Service Corps’ programs, members are asked to develop and agree on covenants to guide their own experience of living together, which typically involves at least three meals a week with each other and communal sessions devoted to spiritual formation, vocational discernment and group therapy.

This year, Johnson worked with program directors to develop additional protocols to minimize the risk of virus transmission. The “quaran-tation” was one example, Johnson said. Corps members who work outside the home also had to test negative for COVID-19 before proceeding to work in the community, and they must follow the typical precautions recommended by public health experts, such as wearing masks and avoiding close contact with others in public.

“If you go to work every day, what has to happen so you don’t potentially bring the virus into the house?” she said. “We had to make sure every house could meet those protocols. … One person gets sick, that implicates everyone living in that community.”

The Episcopal Service Corps network formed in the early 2000s and now is made up of 15 independently organized programs, each sponsored by a local nonprofit organization. Sometimes, but not always, that organization is an Episcopal church or diocese. Prospective corps members do not need to be Episcopalians to apply.

Each applicant accepted as a corps member is placed with one of the network’s local programs for nearly 12 months, loosely shadowing the typical academic year, and program directors match the members with nonprofits in their communities. The program provides housing, meals and modest stipends, and corps members commit to working 35 hours a week on projects ranging from feeding and housing ministries to environmental conservation to racial reconciliation initiatives.

Johnson Service Corps has been active for 20 years, but this year has posed unprecedented challenges, program director Andrew Hudgins told ENS, starting with recruitment of corps members to live in the program’s two houses, in Durham and Chapel Hill.

“We’re living in a time of a highly contagious disease. Is anybody going to want to live with anybody right now?” Hudgins said. Finding willing candidates for the program’s eight openings turned out to be easy, though greater effort was devoted to developing a plan to keep them safe. “At times it feels like we’re rebuilding the program from the ground up,” he said.

Unlike in past years, no two corps members are sharing a room, and extra space has been set aside in each house to enable someone to isolate if a corps member tests positive for COVID-19. And for the first time, Johnson Service Corps organized online video conferences over the summer so corps members could begin to get to know each other before arriving for in-person orientation.

Hudgins said corps members also were advised to be cautious about hanging out with friends or visiting relatives. “Who you hang out with has a big impact on everybody else,” he said. “The second they arrived, every little small decision had an impact on the rest of the group.”

Even so, the program’s resumption this fall is a big change from the spring, when “everything was virtually stopped.” After those lockdowns, Hudgins sees a unique enthusiasm in this round of participants. “They’ve really craved community. … There’s just a different type of energy.”

Doolittle, though, said his enthusiasm for this work transcends the pandemic. After earning bachelor’s degrees in biology and drama, he was looking forward to this year with Episcopal Service Corps to help him discern his next steps professionally and personally. While many former classmates now are looking for jobs in an economic downturn, Doolittle said he already was counting on “a little bit more of a pause.”

“There’s more space and time for figuring things out, and that’s what I needed,” he said. “So the pandemic didn’t really change that need.”

The application period for Episcopal Service Corps’ next deployment opens Nov. 1. Applications will continue to be accepted until all openings are filled, typically through the spring. More information is available online at episcopalservicecorps.org.