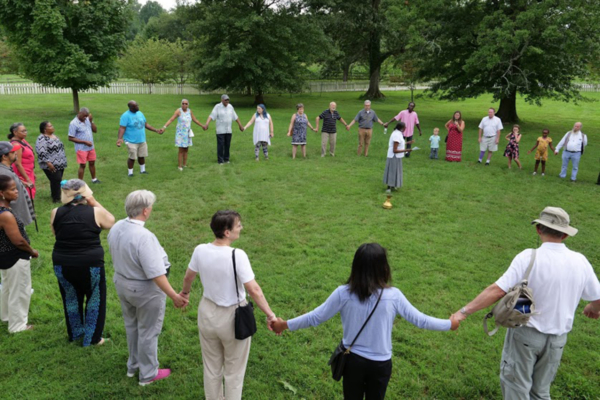 Members of Memorial Episcopal Church and St. Katherine of Alexandria Episcopal Church, both in Baltimore, Maryland, gather in prayer August 2019 at Hampton Plantation in nearby Towson. Photo: Jason Hoffman/Diocese of Maryland

Since 2017, Maggiano has led his congregation’s efforts to research and reexamine that history, both good and bad. Among the congregation’s findings is a letter written in the early 1900s by the rector supporting efforts to keep Black men from voting in Maryland. For decades, clergy and lay leaders sought to keep Black families from moving into the surrounding Bolton Hill neighborhood. And in the 1950s, church leaders refused to integrate a youth center operated with a neighboring Presbyterian congregation.

Today, Bolton Hill is racially diverse, but the Episcopal congregation remains mostly white. The most visible symbol of the church’s past connections to racism is its name – Memorial. The two priests who are connected to the church’s 1860 founding and memorialized by its name, the Rev. Henry Van Dyke Johns and the Rev. Charles Ridgely Howard, were defenders of slavery and came from families who enslaved hundreds.

Despite that “sordid” past, the congregation takes pride in Memorial Episcopal Church’s later history, including its progressive record on women’s ordination and LGBTQ inclusion in the life of the church. More recently, the congregation’s research into church history has prompted it to find ways to engage with community groups working on racial justice issues. And last month, plaques honoring Johns and Howard were removed from the church.

The church’s deacon, the Rev. Natalie Conway, has become a voice for healing by sharing her own family’s story – after her shock at learning that her ancestors once were among those enslaved on the plantation owned by Howard’s family. 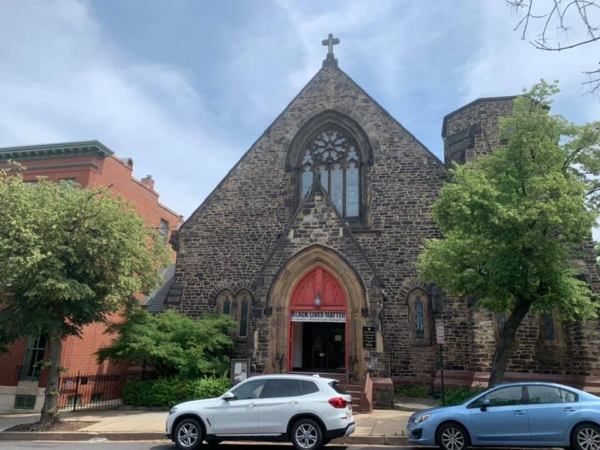 Memorial Episcopal Church was founded partly as a result of a split with Emmanuel Episcopal Church, an abolitionist congregation in the nearby Mount Vernon neighborhood. Maryland, though it did not join the Confederacy during the Civil War, had been a slave state with both Union and Confederate sympathizers. The new church initially was named in memory of Johns, a rector at Emmanuel and slaveholder who died in 1859 while the new church was being built.

Howard served as Memorial Episcopal Church’s rector until his death in 1862, after which his congregation chose to officially memorialize him in the church’s name as well. He had no children and was buried at his family’s Hampton Plantation, which at the time was home to more than 400 enslaved people.

Among them were the Cromwells. Hattie Cromwell, like Howard, had been born at Hampton Plantation, and she remained a slave there until she was freed by a master’s will in 1829. Conway is Cromwell’s great-great-granddaughter.

Conway began serving as deacon at Memorial Episcopal Church two years ago. A 72-year-old Baltimore native, she and her brother are researching their genealogy, and last year her brother discovered their connection to Hampton Plantation. They visited the plantation, now a National Park Service site in Towson, Maryland, and confirmed that their Cromwell ancestors had lived there.

“So, we’re like, wow, that’s something, isn’t it? How do we find out a little bit more?” Conway said. Her brother kept digging and eventually called her with more news. She was inside the church at the time, toward the back near the plaques that honor the founding priests. One of the names connected to the plantation was Charles Ridgely Howard, Conway’s brother told her. “I looked up and, sure enough, the plaque was to Charles Ridgely Howard as the first rector of Memorial Episcopal Church,” Conway said.

She was serving in a church founded by one of her ancestors’ enslavers. “And I just went into a state of shock, and my first reaction was, what am I doing here?”

She talked about it with Maggiano, and he encouraged her to share the story with the congregation, which she eventually did, helping to underscore the importance of the church’s present focus on historical research and reconciliation work. In August 2019, Conway also led a group of about 50 Episcopalians on a trip to Hampton Plantation, including members of St. Katherine of Alexandria Episcopal Church, a historically Black congregation in Baltimore.

Among those who joined Conway at Hampton Plantation was Steve Howard, a Memorial Episcopal Church parishioner who is an indirect descendant of Charles Ridgely Howard; he is the great-great-grandson of the founding rector’s cousin. “He and I had known each other for years and didn’t know how connected we were,” Conway told ENS.

During a ceremony at the plantation, Conway, Howard and other participants stood in a circle and were invited to speak about their connections to slavery, as descendants of either slaves or slaveholders. Afterward, they poured holy water on the ground.

“It was very moving and very powerful,” Howard said. 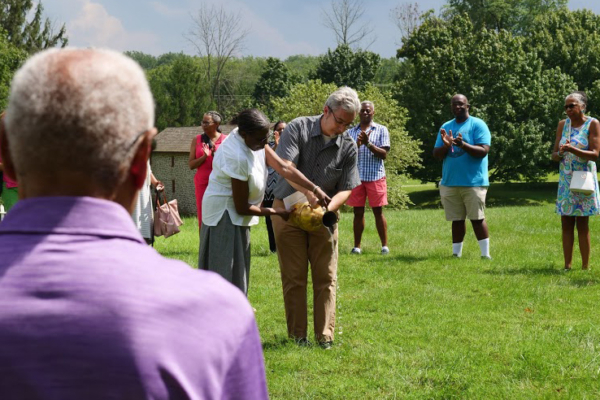 The Rev. Natalie Conway and Steve Howard of Memorial Episcopal Church pour holy water on the ground during a gathering at Hampton Plantation in Towson, Maryland, to remember the lives of ancestors affected by slavery. Photo: Jason Hoffman/Diocese of Maryland

Conway said she initially was reluctant to speak publicly about her ancestry, “but once I did, then opportunities came about for me to keep educating people, and that’s been a joy.” Over the past year, in interviews and presentations to Episcopal groups, she typically is joined by Howard and Maggiano.

Howard, 53, told ENS that he and other parishioners see it as their duty to help change systems that perpetuate racial discrimination, systems rooted in the racism of earlier generations of Americans, including Episcopalians. “Our church is complicit in the problem,” Howard said, and even though Memorial Episcopal Church’s history isn’t solely responsible for racial injustice in Baltimore, “we want to do what we can to alleviate the problem.”

Racial reconciliation, identified as a top priority of The Episcopal Church in recent years, has moved further to the forefront of American discourse this year with the police killings of African Americans, including George Floyd in Minneapolis, Minnesota, whose death set off nationwide protests against police brutality and racial injustice. Calls for change again intensified on Sept. 23 when a grand jury declined to charge police in Louisville, Kentucky, for the March 13 killing of Breonna Taylor, a Black woman, shot eight times in her home when the officers carried out a no-knock warrant.

The Diocese of Maryland began considering a program of racial reparations in 2019, and this September, its Diocesan Convention voted to set aside $1 million to start a fund to support racial healing efforts. Maggiano was involved in some of those diocesan discussions as co-chair of the diocese’s Truth and Reconciliation Committee. His church also has participated in the Trail of Souls, a Diocese of Maryland initiative that began in 2014 with a pilgrimage to commemorate 150 years since slavery was abolished in Maryland. Memorial Episcopal Church was one of two dozen churches that researched their past ties to slavery and racial oppression as part of the project.

In a 2017 blog post about racism in church history and its connection to injustice in today’s society, Maggiano recounted a push in 1909 to amend Maryland’s constitution to implement an “education test” for voting, a measure meant to exclude Black men from voting. The Rev. William Dame was rector of Memorial Episcopal Church at that time.

“The removal of the illiterate negro from politics would immediately tend to elevate and purify them,” Dame wrote in a letter to the Baltimore Sun – presumably using “them” in this case to refer to state politics, not “the illiterate negro.”

Other research detailed the story of the Rev. Arthur Kelsey, a rector who was forced out by the congregation in 1956 for trying to welcome Black worshippers to the church.

Maggiano noted in his blog post that his parish was spending the 2017 Lenten season “remembering, fearlessly exploring our history – so that we know where we have been and where we do not want to go again.” That year, the congregation also organized a Stations of the Cross walk in the neighborhood, stopping at sites of historic racial injustice.

The church’s research and the Conway family’s discovery fueled reconsideration of the church’s name and its honoring of pro-slavery priests. In the church, the plaques of the memorialized priests were draped in fabric while the congregation deliberated on what to do with them. Conway didn’t think covering up the plaques was enough, and after the killing of Floyd in Minneapolis, she preached about justice and fairness during one of the congregation’s Sunday services on Zoom.

Her message to the congregation: “The drapings on the plaques were like ghosts, haunting us, and I really need for you to consider taking those plaques out of this church.”

Other church leaders agreed, and the plaques were removed in early August. Maggiano said the initial plan was to move them to the church’s memorial garden, but they are so heavy they will sink into the ground. An alternate plan is being considered.

“It was important for us to preserve the plaques … to continue to acknowledge that part of our history. We can’t just erase that’s part of our roots … but to put it in more context,” Maggiano said.

The vestry also voted in January 2020 to engage in a process of discernment on a possible rededication of the building and to address the issue of the church’s name. It wouldn’t be the first Episcopal church to consider a name change, after Grace Episcopal Church in Lexington, Virginia, chose to stop calling itself R.E. Lee Memorial Church after the Confederate general. If Memorial Episcopal Church in Baltimore keeps its name, the congregation may change whom or what the name is memorializing.

The discernment process has been delayed somewhat by the coronavirus pandemic, though Maggiano expects it to pick up again this fall, with parishioners likely gathering online to share their thoughts. That could position the vestry to make a decision on rededicating the church in January 2021.

Such deliberations are part of the church’s broader research and reconciliation work, Maggiano said, and the congregation is working to atone for its past in the areas of housing, youth programs and voting. For example, it has begun working with a Black-led home ownership organization in Baltimore, it is stepping up its support for local schools and it is partnering with community groups to register voters.

“The real work begins with the seeking to repair some of the real damage done by our predecessors at Memorial,” Maggiano said.