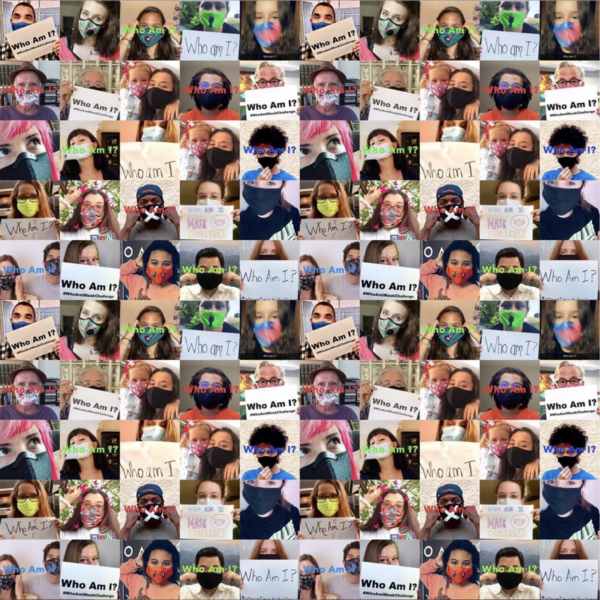 Dozens of people have participated in the #whoamimaskchallenge so far. Image courtesy William Lucas Walker

[Episcopal News Service] In July, several months into the COVID-19 pandemic, William Lucas Walker was feeling exasperated – not just by the constant angst of the pandemic itself, but by Americans’ failure to take the simple step of consistently wearing masks to contain the virus.

Centers for Disease Control and Prevention Director Robert Redfield had just said that “if we could get everybody to wear a mask right now, I think in four, six, eight weeks we could bring this epidemic under control,” yet Walker was still seeing too many people refusing to wear one and not enough national leadership on the issue.

“As someone who works in the entertainment field, by mid-summer I found myself a little puzzled, still waiting for the national coordinated PR campaign around mask-wearing that wasn’t happening,” Walker said.

A friend of his was feeling the same way and posted about it on Facebook.

“And she, basically, in her Facebook post said, ‘Where the hell is the big Hollywood mask campaign they should have rolled out months ago, with all these movie stars telling people to put on a mask?’” Walker said. So he decided to start one.

Walker, a member of All Saints Church in Pasadena, California, is a veteran TV writer, having worked on shows like “Roseanne,” “Frasier” and “Will & Grace.” He’s also the creator of the #WhoAmIMaskChallenge, a social media drive to encourage people to wear masks, which he initially envisioned as a series of quick TV PSAs.

“I immediately saw, in my head, a man in a mask – and, of course, you couldn’t tell who it was because I can’t even tell who my children are in a mask,” Walker told Episcopal News Service. “And this title comes over his face and it says, ‘Who am I?’ And he slowly looks into the camera, takes his mask off and gives you his big smile, and it’s Denzel Washington. And in 15 to 20 seconds, he tells you why he wears a mask. He doesn’t beg you to wear a mask, he just tells you why he wears a mask.”

He knew it would take too long to get major stars on board – and that they are bombarded with requests to do videos like these – so he decided to start smaller and make it a grassroots social media campaign. The formula is simple: You record a brief video of yourself in a mask, holding up a sign with the hashtag on it, then remove your mask and say a few words about what motivates you to wear one. You post it on your social media accounts tagging five friends, challenging them to do the same.

To make people more likely to do it, he kept it as simple as possible.

“Everybody’s got two minutes,” he said. “What else are you doing?”

He was partially inspired by the Ice Bucket Challenge in 2014, which may have started among members of a small church in Georgia, who then challenged other churches to do it. Seeing that congregations may be ideal communities for social media challenges like this, Walker enlisted the leadership of All Saints, where he has been worshipping since 1994 and where he met his husband 21 years ago. Now some of the videos are being shared on their social media accounts, and Walker will introduce the congregation to the challenge during a Zoom service on Sept. 27. He’s also shared it with a friend – the Rev. Neil Tadken, rector of St. Luke’s Episcopal Church in nearby Monrovia, who has challenged his congregation.

But Walker’s also reaching out through his connections in Hollywood and on Broadway. He is friends with the mother of pop star Billie Eilish, who may do a video at some point. It turns out her mother has enough social media followers – mostly fans of her daughter – that the video she did is already gaining traction through them. Actors Beau Bridges and Bryan Batt are among the celebrities who have done videos so far, and more are coming.

#WhoAmIMaskChallenge 31 @bryan_batt Share today if you can. Shooting and sharing these short spots is a quick, easy action you can take today to speed the end of COVID-19. Why do you wear a mask? Make a 30-second video to share with people you care about. Takes less than a minute. Then post and tag your friends. Easy. Simple Filming Guidelines in comments below. Make one. Invite your friends make one. More voices, less spread. Thanks.

“As I realized it was a social media campaign, I thought, well, it can be everybody, but if a few celebrities will do it, that’ll give it the spotlight it needs,” Walker said.

He’s showcasing videos of some well-known faces alongside everyday people on the website and Instagram page to prove the point that everyone is vulnerable to COVID-19 and everyone wants it to end as soon as possible.

Walker said he’s interested to hear the different reasons people give for wearing masks. Of the dozens of videos he’s seen, “no two are alike,” he told ENS.

“It’s fast, it’s easy – it’s so easy to do,” he said. “My goal is that eight weeks from now, you won’t be able to go anywhere on Instagram or Facebook without seeing somebody taking off their mask and tell you why they wear it. Not berating you, just telling you why. Because nobody can argue with you telling them why you wear a mask! This is not an argument, just a conversation.”

Correction: An earlier version of this story incorrectly listed the date when Walker will present the challenge to his congregation and misidentified the other church that has adopted it.