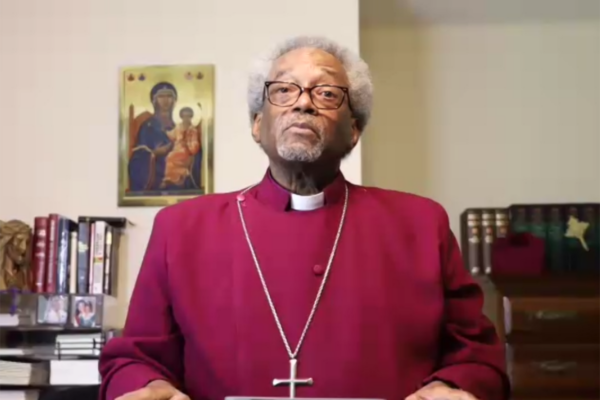 Presiding Bishop Michael Curry preaches at the opening of the Sept. 16 meeting of the House of Bishops on Zoom.

[Episcopal News Service] Presiding Bishop Michael Curry, in an opening sermon for the Sept. 16 online meeting of the House of Bishops, urged Episcopalians to vote in the upcoming elections and to “encourage others to vote as their conscience leads them.” And he affirmed that The Episcopal Church’s positions on political issues, though nonpartisan, should not be confused with “moral neutrality.”

“The vote is so sacred and important for all people, regardless of your religious tradition or your politics or your nationality,” Curry said in prerecorded remarks, delivered during a Zoom meeting. “The vote, as an act of moral humanity, is so important that people have given their lives for it.”

The sermon also was released later in the day as a “word to the church.” In it, he cited Scripture to discuss what Jesus did during his time that can guide his 21st-century followers to bear witness in today’s world. Those teachings are especially relevant, Curry said, during the ongoing pandemic and this “time of great divisions.”

“Divisions that are deep, dangerous and potentially injurious to democracy,” Curry added. “What is the role of the church in the context of an election being held in a time such as this? What is our role as individual followers of Jesus Christ committed to his way of love in such a time as this?”

A variety of resources on civic engagement are available from the Office of Government Relations.

Inflamed racial divisions and widespread protests against racial injustice this year have shaped both the dynamic of the presidential campaign and much of the bishops’ recent work in their dioceses and with each other. The bishops’ Sept. 16 meeting built on the theme of racial reconciliation that was discussed at length during their last official meeting in late July. That meeting also was held on Zoom due to the inability to meet in person while COVID-19 is still spreading widely.

Much of the latest House of Bishops meeting was conducted privately so the bishops could discuss and reflect on the latest draft of a report by the bishops’ Theology Committee titled, “Reflection on White Supremacy, the Beloved Community and Learning to Listen.” During the first part of the meeting, which was open to reporters, several members of the committee introduced the report by describing their personal experiences with racism.

“I have to confess, I am so weary … because we have been doing this work for so long and there is so much more to do,” said Indianapolis Bishop Jennifer Baskerville-Burrows, who in 2017 became the first Black woman to serve as a diocesan bishop. Since then, several more dioceses have elected Black women and other people of color as bishops, though the body is still overwhelmingly white and male.

Baskerville-Burrows spoke of the powerful inspiration she felt as a layperson and then a priest whenever the House of Bishops spoke out against racism in its pastoral letters, notably in a 1994 message that condemned racism as a sin. She described the bishops’ work today as a continuation of that hard work.

New York Bishop Suffragan Allen Shin noted that racism in America often is seen as binary, a matter of white and black, but as a South Korean immigrant who has called the United States home for nearly 50 years, he sees racism as a more “complicated issue.”

“Asian Americans are constantly seen and see themselves as outsiders,” Shin said, and that xenophobia has only intensified during the coronavirus pandemic. Shin grew emotional as he described the fear he and other Asian Americans feel at being made scapegoats for the virus. “There are days when I’m actually afraid to go outside because I don’t know what will happen, just because of what I look like.”

Several bishops on the committee shared how they grew to realize how their privilege as white Americans had blinded them for much of their lives to the reality of the experiences and perspectives of many of their fellow citizens.

Arkansas Bishop Larry Benfield described himself as a “white Southern male bishop” and confessed that he had long thought that making the church a more hospitable place by welcoming people of all colors was enough to bring new diversity after centuries of predominantly white membership. While reexamining such beliefs through discussions with the Theology Committee, he began to understand the patronizing presumptions of that way of thinking.

“The truth of the matter is, the offer of acceptance by white people is a way to keep others still feeling second-class, and it keeps us white people feeling so virtuous about how progressive we are,” Benfield said. “I’m now finding myself in the uncomfortable place of having to ask myself why any person of color … would want to be accepted by white people in a very white church.”

The Theology Committee’s report was not available to review for this story, and it wasn’t immediately clear when the House of Bishops would release an official draft.

Curry lamented the unyielding pain of racism during his opening sermon, warning that the problem transcends any one election.

“The wounds and the divisions in American society are so deep that even an election by itself cannot heal them,” he said. “The murder of George Floyd, Breonna Taylor and so many others has exposed the death-dealing depth of racism and white supremacy deeply embedded in the soil and in the soul of America. We can’t go on like this.”

“I am a follower of the Lord Jesus Christ because I believe he has shown us that better way. I believe that the way of unselfish, sacrificial love can show us the way of repentance, the way to repair the breach,” Curry said. “This is long-distance work. There are no quick fixes because the wounds are so deep, but we need not feel enslaved by fate.”

Curry concluded with the story of a 2016 incident between a Donald Trump supporter and a protester outside one of the then-candidate’s rallies in Fayetteville, North Carolina. The 79-year-old Trump supporter, John McGraw, punched the protester, Rakeem Jones, and McGraw was arrested and charged with assault.

Months later, McGraw pleaded no contest and was sentenced to a year of probation. Afterward, he faced Jones and the two shook hands. “We are caught up in a political mess today, you and me; we’ve got to heal our country,” McGraw told Jones, and at Jones’ request, the two later had lunch together.

“They went to lunch together,” Curry said. “We can, we will, we must learn to eat at that welcoming table. Jesus has shown us the way. It is the way of unselfish, sacrificial love. And that way can make room for us all.”