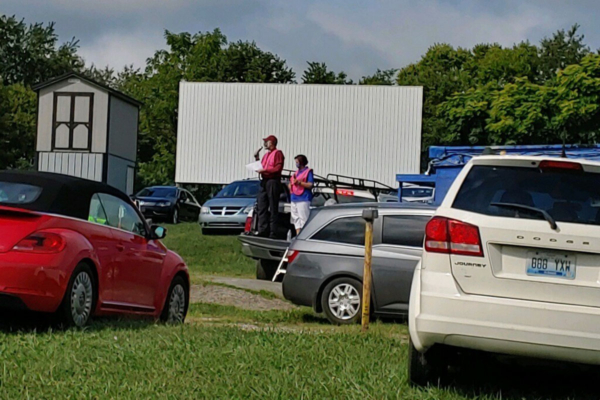 [Episcopal News Service] How do dioceses hold their annual conventions in this time of pandemic? The short answer: without convening in person.

The Diocese of Lexington made one exception that proves the new rules. It held a special convention on Aug. 29 in person but outdoors, at a drive-in movie theater. Bishop Mark Van Koevering presided for 10 minutes, speaking atop the bed of a pickup truck to about 100 Episcopalians sitting in their cars. They had just one purpose, to change diocesan canons so they specifically allow a virtual Diocesan Convention on Oct. 24.

Online gatherings are the new norm, as the sweeping, unchecked spread of COVID-19 has disrupted all aspects of church life this year. Episcopal congregations have largely shifted to hosting worship services on Facebook, YouTube, Zoom and other online platforms since March, and the trend now is extending to dioceses, most of which are planning virtual conventions for the foreseeable future, including into 2021.

In October and November, those dioceses will include Los Angeles, Louisiana, Maine, Milwaukee, Pennsylvania and Virginia. Chicago will hold its Diocesan Convention online on Nov. 21, followed by an online electing convention on Dec. 12 to pick retiring Bishop Jeffrey Lee’s successor. The Diocese of Oregon just wrapped up its own electing convention, meeting online Aug. 29 to select the Rev. Diana Akiyama as its new bishop. On Sept. 12, the Diocese of Maryland livestreamed its Diocesan Convention, which it had postponed from May. And Southern Virginia leaders decided last week they will move the diocese’s February 2021 Annual Council online rather than meet in person at Colonial Williamsburg as originally planned.

“If you had asked me if this was possible, I would have said no,” said Bishop Sean Rowe, who oversees two dioceses now preparing for online conventions: Western New York and Northwestern Pennsylvania. “The intention is that conventions meet annually and they meet in person, and this year we can’t.”

Similar constraints apply to The Episcopal Church’s General Convention, the triennial churchwide gathering that is scheduled to be held next year in Baltimore, Maryland. Church leaders are considering potential changes to avoid the risk of rapid COVID-19 transmission at a large indoor gathering. No decisions have yet been announced, but when Executive Council meets next month, it is expected to discuss options ranging from a virtual General Convention in 2021 to postponement of the in-person gathering until 2022.

Diocesan officials involved in planning their annual conventions summarized for Episcopal News Service some of the unexpected, but not insurmountable, logistical challenges they have faced, such as certifying delegates to participate and recording clergy and lay votes separately. They also suggested there are some advantages to meeting online, especially lowering geographic barriers to participation.

Even so, they hope this year of disruption will be followed by a healthy return to in-person conventions. Nothing quite compares to seeing fellow Episcopalians face to face.

“Our goal is to get back to in person, for everything,” New York Assistant Bishop Mary Glasspool told ENS. She is helping to plan the Diocese of New York’s online convention, which is scheduled for Nov. 1.

Rather than schedule all of the New York convention’s business and activities on that one day, diocesan officials launched a series of weekly convention “rollout” meetings on Zoom for the two months leading up to the main gathering. For an hour each Wednesday evening, one or more diocesan committees or commissions make brief presentations and participants are invited to ask questions.

Nearly 200 people attended the Sept. 9 rollout meeting, featuring presentations by the diocese’s college chaplains and deacons. Glasspool hopes for an even larger turnout in subsequent meetings, given that about 500 clergy and lay delegates typically gather each year for the Diocesan Convention.

The virtual convention will look like a traditional convention in many ways. On Nov. 1, Bishop Andrew Dietsche will give his address, and the Very Rev. Kelly Brown Douglas, dean of Episcopal Divinity School at Union Theological Seminary, will preach. The diocese will approve a budget, hold diocesan elections and vote on resolutions.

“It’s also a time when representatives from the breadth of the diocese gather in one place … to build up the body of Christ,” said Glasspool, and an online setting isn’t as conducive to fostering personal connections between participants. “That’s where we’re all struggling. We’re all trying to figure out how to do these things, and you know, there are certain things there are no replacements for.”

Many dioceses hold their conventions in the fall, so they had plenty of time to anticipate the need to move online after the pandemic hit in mid-March, forcing the suspension of most in-person worship and church activities. More recently, a group of canons to the ordinary and other diocesan officials met on Zoom to discuss their convention plans and share ideas. The meetings were held on four consecutive Tuesdays from late July into mid-August.

“All of us are in at least a similar boat in trying to figure out, how do we do the work that God is calling us to do … as stewards of our dioceses within the framework of a videoconferencing platform?” the Rev. Elise Johnstone, canon to the ordinary in the Diocese of Lexington, told ENS.

For one thing, attention spans tend to be shorter online, Johnstone said. Shorter sessions will help. Dioceses also won’t have the traditional option of paper ballots, so they are assessing various software options that will enable voting during the virtual meetings. And opportunities for spiritual formation will be limited by the format, but Johnstone noted that “just being able to pray together” will be worthwhile, even if it is through a computer screen, tablet or phone.

When participants prayed together at Lexington’s special convention at the Judy Drive-In near Mount Sterling, Kentucky, the “amens” took the form of car honks. About 85 clergy members and lay leaders, enough to meet the canonically required minimum, listened to the program through the theater’s FM radio frequency. 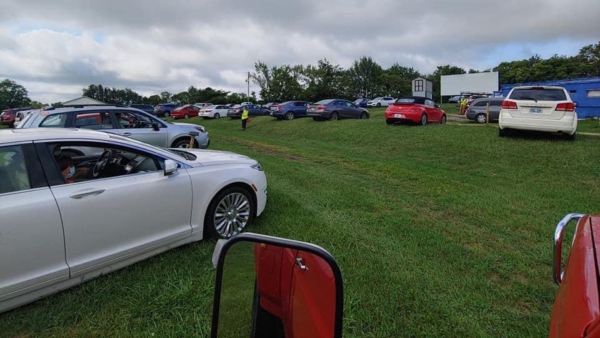 About 85 clergy and delegates remained in their cars to attend the Diocese of Lexington’s special convention on Aug. 29. The purpose was to approve canonical changes to allow for a virtual Diocesan Convention. Photo courtesy of Elise Johnstone

“We thought, what is the safest way we can gather in person?” Johnstone told ENS. Participants ended up enjoying the option of a brief drive-in convention. “We got to pray together in a way we really haven’t been able to do in months.”

The clergy members and lay delegates waved color-coded cards out their windows to vote for the canonical change that will allow a virtual Diocesan Convention. Lexington’s dilemma was one shared by other dioceses, which have taken various steps to ensure that virtual conventions don’t run afoul of diocesan constitutions and canons – this year and, potentially, in future years.

“We were minorly concerned that we might be in this same boat next year,” Johnstone said.

The Diocese of Maryland’s Diocesan Convention had been scheduled for May 15 and 16, but after the spring surge in coronavirus cases in the United States, diocesan leaders first postponed and then canceled plans for a large in-person convention. “We realized we really needed to be prepared with a virtual plan because of all the uncertainties,” Carrie Graves, the diocese’s communications director, told ENS.

The rescheduled convention on Sept. 12 took place mostly online, with one notable exception: An in-person quorum of 20 clergy members and 20 lay delegates took their seats in person at the Cathedral of the Incarnation and the adjacent diocesan center in Baltimore to fulfill minimum in-person requirements. The diocese also had included a prompt on its registration forms asking participants to vote to suspend the rules of order to allow the rest of the convention to occur online.

In a normal year, Rowe would have presided in person at two conventions held at the same time, with most programing combined but separate business sessions for each diocese. This year, Rowe will open the proceedings Nov. 7 on Zoom by asking for consent from clergy and delegates to proceed with a virtual convention.

“It is impossible to meet in person, and we understand this,” Rowe said in an interview with ENS. “It’s clear that our constitution and canons limit us to meeting in person, and that we have to essentially give ourselves permission” to conduct diocesan business online.

Rowe also acknowledged the compromises inherent in a virtual meeting. “We are accustomed to deliberating on matters in person,” he said. “What is lost is the relationship-building that happens over the course of time spent in the same place, and while I wouldn’t want to rule that possibility out in a digital format, we’re not practiced in that.”

At the same time, meeting online brings some new opportunities. The two dioceses’ partnership emphasizes ministry experimentation, and online diocesan conventions are another example of how the coronavirus pandemic is forcing churches and church leaders to try new ways of reaching and connecting with members and the community.

For Western New York and Northwestern Pennsylvania, meeting online also makes it easier for the dioceses to bridge geographic divides. People from across the two dioceses will be able to watch the events remotely, including a sermon by the Rev. Lester Mackenzie, chaplain to the House of Deputies, who is scheduled to preach Nov. 6 at a pre-convention Service of Reconciliation – without having to travel from his home in Southern California.

Similarly, when the Diocese of Indianapolis gathers online for its Diocese Convention on Nov. 7, the keynote address will be delivered hundreds of miles away by the Rev. Stephanie Spellers, the New York-based canon to the presiding bishop for evangelism, reconciliation and stewardship of creation.

Brendan O’Sullivan-Hale, Indianapolis’ canon to the ordinary for administration and evangelism, told ENS that he and other diocesan officials were still working out logistical details to enable a smooth convention on Zoom. One challenge is verifying credentials; the diocese wants everyone to be able to watch, but only clergy and delegates can participate and vote.

Indianapolis also is weighing its options for recording votes. For some church governing bodies, the poll function on Zoom might be enough – The Episcopal Church’s Executive Council has used that option successfully to log the votes of its few dozen members – but diocesan conventions sometimes have hundreds of clergy and delegates voting separately. Indianapolis is considering a tool called ElectionBuddy to handle that process, and there are several other online vote management options available to dioceses.

The greater challenge, however, is creating an online space for meaningful debate, particularly on sensitive issues. Indianapolis has two proposed resolutions this year related to racial justice that will be taken up on Nov. 7.

Such careful planning and preparation likely will continue to be necessary throughout the current cycle of diocesan conventions, with an average of more than 200,000 new COVID-19 cases diagnosed each day worldwide and about 35,000 new cases on average in the United States, which is approaching 200,000 deaths. Vaccines, meanwhile, are in development but not expected to be deployed widely until 2021 at the soonest.