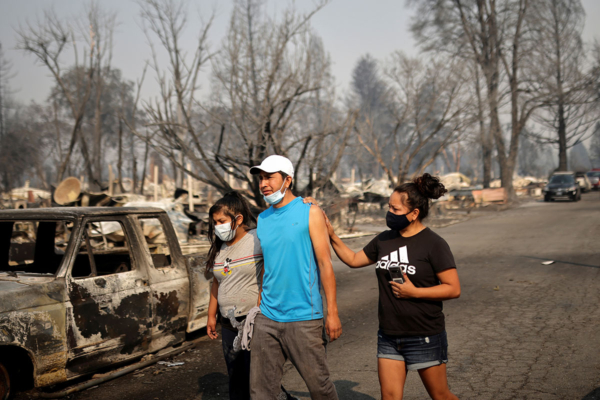 [Episcopal News Service] With wildfires raging up and down the West Coast, in some cases prompting evacuations, destroying homes and threatening communities, Episcopal leaders say they and their congregations are responding and preparing to respond to communities in need as the crisis develops.

At least 100,000 Oregon residents reportedly faced evacuation orders as of Sept. 11, with the number potentially reaching 500,000 as the fires spread. The mayor of Portland declared an emergency with fires raging just beyond the city’s suburbs.

“The fires are intense, and the air quality is horrible,” Oregon Bishop Michael Hanley told Episcopal News Service in an email. “We are working this morning to get connected with folks in the hardest hit areas.” Some Episcopalians likely have lost their homes, he said, though he didn’t yet have confirmation.

St. Martin’s Episcopal Church in the small Oregon city of Shady Cove is close to the edge of one of the fires. Hanley said he heard from the vicar that the town is safe for now.

In California, where fire crews are struggling to contain some of the West’s largest fires, the Diocese of San Joaquin’s Episcopal Conference Center Oakhurst was evacuated this week, with staff members making it safely to Fresno, about 60 miles to the south.

“Our congregation members in Oakhurst at St. Raphael’s are currently in the evacuation warning stage, so they are ready and prepared should evacuation become mandatory,” the Rev. Anna Carmichael, the diocese’s canon to the ordinary, said in an email. “Our prayers are with our evacuated staff, our congregation members who are waiting and watching for evacuation notice, for our sisters and brothers in California, as well as Oregon, Washington and Idaho also battling devastating fires.”

She also praised the work of emergency responders and firefighters who are risking their lives to protect communities from the blazes.

Even when communities aren’t threatened directly by the wildfires’ flames, smoke and ash are creating a public health crisis, driving air quality to hazardous levels and prompting authorities to recommend residents stay indoors.

“The air quality is terrible,” said Stephanie Taylor, communication director for the Diocese of California, which is based in San Francisco and encompasses the Bay Area. News images from the region this week showed the daytime sky darkened to an ominous orange as smoke drifted in from the fires.

Scenes from around San Francisco where dark orange skies are still blanketing the city and region.

This apocalyptic hue is due to a combination of smoke from various wildfires sitting above the marine fog layer. More here on @sfchronicle https://t.co/eChDMsLZLs pic.twitter.com/VaQlNsML0y

Taylor, in an email, said the diocese is applying for a grant from Episcopal Relief & Development to buy N95 face masks for local residents who are homeless. Episcopalians in the diocese also are assembling “care bags” for evacuees with food, toiletries and other supplies.

Episcopal Relief & Development released a statement on Sept. 10 saying it has been working since mid-August to support California and other Western dioceses dealing with the wildfires.

“Our partners are continuing to monitor the fires and the air quality in their areas and are reaching out to vulnerable groups to determine needs,” program officer Tamara Plummer said in the statement. “Right now, we need to let the first responders make it safe before dioceses can begin to provide relief.”

The Western states, especially California, are no strangers to devastating fires, though the extent of the recent blazes has been particularly alarming, and the public health impact is compounding the effects of ongoing COVID-19 outbreaks. At least 15 people are reported to have died in the fires, which have consumed more than 3 million acres in California and nearly a million acres in Oregon and plagued communities in Washington as well.

The intense fire season also comes at a time when Americans across the country are reeling from numerous natural disasters and destructive weather systems that scientists say are becoming more likely because of climate change.

South of San Francisco, the Diocese of El Camino Real reports that some of its priests serving congregations in evacuation zones have developed communication plans to remain connected with parishioners and fellow clergy and to assess local needs as the disaster evolves.

“In our diocese, I have witnessed with wonder as people have walked through these stormy times towards those in need,” Bishop Lucinda Ashby said in an Aug. 26 message to the diocese. “It is amazing to behold God’s beloved as they reach beyond their own fear, to stretch out a hand and offer solace, care, and a warm bed to another.”

And in the Diocese of Los Angeles, some communities are dealing with evacuation orders or potential evacuations, though the present threat is more smoke than flames, according to the Rev. Melissa McCarthy, canon to the ordinary. “It’s the waiting and waiting and watching that’s hard, in addition to the horrible air,” she said in a message to ENS.

“But we’re encouraged that breezes were blowing north and temperatures relatively mild,” Taylor said. “Please keep St. Luke’s and all our communities threatened by fire in your prayers.”