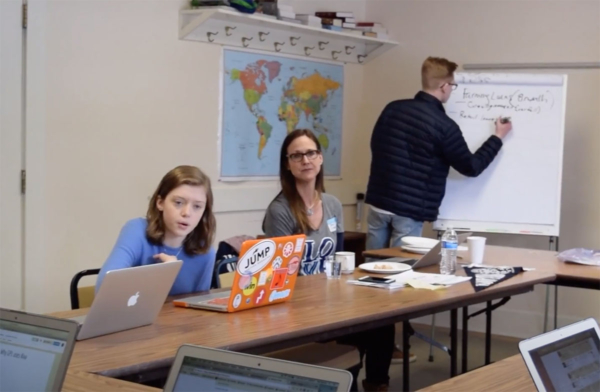 [Episcopal News Service] From her home in Stratford, Connecticut, 18-year-old Fabiola Millien-Faustin helped a woman in Pakistan buy supplies for a small business that makes discarded tires into sandals. In nearby Ridgefield, Kayleigh Bowler, 17, loaned money to a single mother from Togo for a bakery business. A microloan from Dana Walters, 16, of Bridgeport helped a family in Venezuela buy sewing kits.

These teens are part of Global Philanthropy Leaders, an initiative established by St. Stephen’s Episcopal Church in Ridgefield, Connecticut. It combines Scripture readings with teachings on personal finance, development economics and the ins and outs of microlending. The teens talk about issues of global poverty and learn how to take action by providing microloans to people across the globe.

The daughter of Haitian immigrants, Millien-Faustin said she had witnessed people support ministries in Haiti and other countries, but she didn’t know how she could contribute.

“I always thought philanthropy was for people who were very wealthy, but I 100% see myself as a philanthropist now,” Millien-Faustin said. “I’m seeing change in the world and I can definitely play a part in it. A little bit of money, all gathered up, can go a long way.”

Buoyed by the initial response from St. Stephen’s youth, the initiative expanded in 2018 to St. John’s in Bridgeport. The following year, youth “apostles” from St. Stephen’s and St. John’s visited other congregations to teach about and establish the program in more locations. And Global Philanthropy Leaders has received requests to expand the initiative to congregations across the United States. This fall, the initiative is scheduled to launch in Jacksonville, Florida. Also, an online formation class for youth and adult leaders, with a focus on philanthropy for teens, will launch in partnership with ChurchNext sometime in the fall.

Since St. Stephen’s began Global Philanthropy Leaders in 2017, co-founder Rich Stein, an economist and member of the congregation, said about 65 high school students from nine Connecticut congregations have now invested $10,000 in small businesses and entrepreneurs throughout the developing world, one $25 loan at a time. The students have a 99% repayment rate, which they use to extend new microloans, Stein told Episcopal News Service.

These students are making “sustainable and lasting change,” he said. “Our high schoolers are really looking for ways to make a difference, tangible ways … to help someone build a business, to help build a better future for that family. If that one person becomes successful enough to hire someone in their village or neighborhood, now you’ve helped another family and, soon, the whole village.”

An estimated 736 million people worldwide live on less than $1.90 a day, with the majority of those in poverty living in South Asia and sub-Saharan Africa, according to the United Nations, which has ending poverty as its No. 1 sustainable development goal. Extreme poverty leaves millions of people without access to clean water, health care or education.

Microlending is one tool to help address this problem. In many places, capital is simply not available for small loans, Stein said. Few banks will lend money for a new cow or sewing kits, but for the recipients, these small investments can be life-changing. Instead of turning to loan sharks, who can charge up to 100% interest, people can apply for a microloan, with structured repayment plans and low interest rates, Stein said.

The intersection of social justice and faith appeals to Dana Walters, a member of the youth group at St. John’s who began the program last year as a sophomore.

“I love it,” she said. “It’s very exciting to see how much you can help change. We don’t have a whole bunch of money, but it keeps recycling and coming back, so we get to help more and more people.”

The idea began with a conversation between Stein and the Rev. Whitney Altopp, rector of St. Stephen’s in Ridgefield, who co-founded the program.

Stein, who has experience in microlending, wondered how to encourage the practice in congregations. Altopp entered the conversation with a history of working with youth and a passion for developing ministries that engage teens through faith and service.

The pair enlisted Jane Lindenburg, youth ministry coordinator at St. Stephen’s, and began fleshing out the concept. The vestry committed to funding the program, giving each participant enough money to make up to 10 loans a year. The students are encouraged to contribute $25 of their own money.

The support of the vestry is very meaningful to the students, said Lindenburg. It’s a message: “We believe in you. We trust you. We want you to become the helpers, the purpose-driven leaders. Our youth take great pride that they’re stewarding the parish’s money.”

Once a month during the program year, the group gathers for a meeting; at the end of the year, the participants share their experience with the wider congregation. They start with food and fellowship, followed by a dive into Scripture. Stein and others offer lessons on different aspects of economics, including investing in the future, living within your means and paying God first.

Stein also teaches best practices for microlending, such as how to research requests and evaluate the likelihood of repayment. The students then make their own decisions about which projects to extend the microloans to, using the nonprofit crowdfunding loan platform kiva.org.

During her three years in the program, Kayleigh Bowler, a member of St. Stephen’s, often chose to support the businesses of women — and listened to her gut. “Sometimes, I would feel this sense of rightness, like this was the person I was supposed to be making a loan to, that we were meant to be connected. … There are so many different ways to find solutions to problems if you’re willing to trust God, to trust that there is a way.”

Altopp said the program has brought an unexpected result in the life of the entire congregation: The work of the youth is shaping the conversations around money in the vestry and church leadership.

“We’re asking, ‘Our money is out there doing stuff in the world through our investments. What do we want it to be doing?’” said Altopp. “It’s been neat to see adults saying, ‘I want to be part of this. I want to learn more.’”

Stein hopes Global Philanthropy Leaders is the beginning of a movement.

“We talk about our youth as being future leaders. What I’ve seen at these year-end presentations is that they’re already leading now,” Stein said. “They’re doing something that’s worthwhile and in God’s name, and they’re inspiring adults to follow in their footsteps. I posit that our youth are already leading our church. We just need to listen to them more.”

– Richelle Thompson serves as managing editor of Forward Movement and is a member of St. Andrew’s Episcopal Church in Fort Thomas, Kentucky.