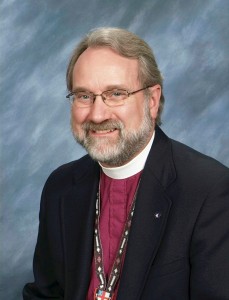 [Diocese of Western Massachusetts] The Rt. Rev. John Thomas Tarrant, former bishop of South Dakota, passed away Aug. 24 of an apparent heart attack, according to a pastoral statement issued by Western Massachusetts Bishop Douglas Fisher. Following his retirement as bishop, Tarrant began serving as an interim at St. Stephen’s Episcopal Church in Pittsfield, Massachusetts, in May 2019.

Tarrant was consecrated bishop coadjutor of the Diocese of South Dakota on Oct. 31, 2009, in Sioux Falls, South Dakota. He became diocesan bishop on Feb. 2, 2010.

Tarrant was born in Kansas City, Missouri, on Feb. 18, 1952, and raised in rural Michigan. He graduated from Michigan State University in 1974 with a political science degree and received his master of divinity degree from Virginia Theological Seminary in 1983. He has served congregations in Western Massachusetts, Connecticut and South Dakota.

Upon his retirement as bishop, Tarrant returned to Western Massachusetts.

“His pastoral presence was a great blessing to the people of St. Stephen’s. His support of the Cathedral of the Beloved and the under-housed in the city resonated with John’s lifetime commitment to forming ‘beloved community.’ His passion for justice motivated John’s witness at Standing Rock. His humble ministry among indigenous people made John a wonderful storyteller of God’s love for diversity. While this loss is especially local, it is felt churchwide. The House of Bishops mourns John today as we remember a colleague and friend,” wrote Fisher.

Tarrant is survived by his wife Pat and their children.

The Diocese of South Dakota submitted the following:

Those who knew the Rt. Rev. John Tarrant knew that he would not be comfortable with praise and acclamations concerning his life or his ministry. He was a humble minister of God who knew he was loved by his creator and wanted you to know that you were likewise loved. But as he is no longer able to tell us not to sing his praise . . .
Lists of events or projects that Bishop John Tarrant was involved with would tell you very little about him. This is not because he did not have accomplishments, in fact he had many. But he never did things to be recognized for them. His life, his ministry, his whole being was focused on serving God and caring for God’s people. To know Bishop Tarrant was to be in a relationship first. Any accomplishments that arose from those relationships were secondary in his mind to the relationships themselves. Anyone who ever received a phone call from Bishop Tarrant has heard these words: “Hi, this is John Tarrant. Am I interrupting anything?” He never assumed that what he wanted to talk to you about was more important than what you were doing. This humility exemplified his ministry.

Bishop Tarrant cared deeply for the missions and parishes under his care. Many congregations in the diocese experienced this firsthand as Bishop Tarrant would work with them through times of challenge or conflict. Bishop Tarrant also had a deep love of the clergy and people of this Diocese. He often commented that one of the most important things about ministry is simply showing up. Being present with people in their joy and in their sorrow was a vital part of his ministry as priest and as bishop. His official visitation schedule was always full, and visits usually lasted multiple days. He would also make time to visit congregations unofficially whenever need or opportunity presented itself. Many of the clergy of the diocese can share stories of times when Bishop Tarrant would make trips to visit with them and their family. He genuinely enjoyed being with the people of the diocese, and this is when he was at his best. Bishop John understood how to “work a room” in the best sense of that phrase. He would tirelessly make his way around any gathering greeting people, asking about their family or concerns they had shared on earlier occasions, getting to know people he had not met previously. Building and tending relationships.

Bishop John was also a tireless advocate for the diocese and for the needs of the people. He built relationships within the House of Bishops and in the larger church in part because building relationships was important to him, but also because he understood that for the ministry of the Diocese of South Dakota to thrive, it needs to be undertaken in partnership with the larger church and especially in partnership with General Convention. At all three General Conventions that occurred during his tenure as Bishop, he took the time to work with the deputation from South Dakota to plan the telling of the story of ministry in South Dakota so that others would see at least some of who we are and what God is doing in our midst. And he would tell the story of ministry in South Dakota to anyone who would listen.

But in Bishop Tarrant’s eyes, telling the story was only half the task. The other half was inviting people to come out to South Dakota and experience it themselves. A quote of Bishop Tarrant’s reported by Matthew Townsend expresses this best: “You can paint a sunset, but it’s not the sunset. You need to experience the sunset. You can paint a scene of the prairie, but it is not a prairie. Until you come and sit on a prairie and you listen, and you smell, and you are present, you don’t fully understand.” Bishop Tarrant wanted people to come to South Dakota and experience for themselves. He wanted people to build relationships because he knew that these relationships, grounded in faith, grounded in God, would change the world.

Niobrara Convocation, the 147-year old, multiple-day gathering of Lakota/Dakota Episcopalians, was always a favorite event in the year for Bishop Tarrant. When asked what it was about Convocation that he found so enjoyable he replied that in his experience it was the one event in the church that was not about doing something. It was about being with people, getting together and sharing the stories of our ministries and our lives with one another. It is these deep connections that were most important to Bishop John.

In his life, John fought the good fight of faith and he has now finished his course with joy. May he rest in peace and rise in glory.
“Go into the world in peace. Be of good cheer. Fight the good fight of faith that you might finish your course with joy. And the blessing of God, the Father, the Son, and the Holy Spirit be with you and those you love, always.” -The Rt. Rev. John Tarrant’s favorite blessing