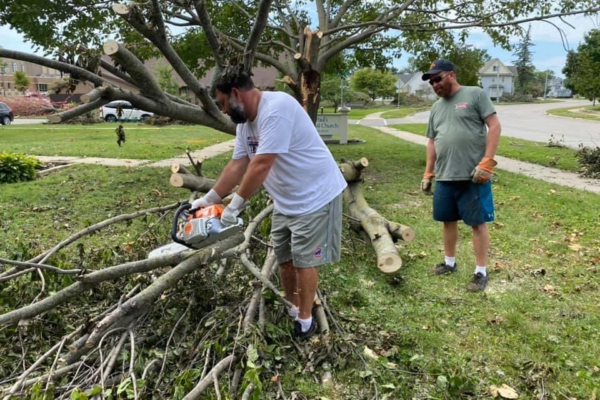 Dustin Smith cuts through a branch at St. Paul’s Episcopal Church in Grinnell, Iowa, as he and Dave Ford help remove a tree downed by the derecho windstorm that hit the state on Aug. 10. Photo courtesy of Wendy Abrahamson

[Episcopal News Service] Episcopal congregations in Iowa are helping their neighbors rebound from a devastating windstorm that hit last week with the force of a hurricane, downing trees, damaging homes and businesses, knocking out power for about a half million residents and destroying about 10 million acres of farmland in the state.

The Diocese of Iowa also has issued a call for donations to support relief efforts after the Aug. 10 straight-line windstorm, known as a “derecho,” which has been blamed for at least three deaths. Winds in some places were reported to have topped 100 mph during the storm.

“The damage is so massive, it is hard to accurately wrap your head around it,” said the Rev. Meg Wagner, the diocese’s communications missioner. Communities had no warning, as they would with the approach of a hurricane, she told Episcopal News Service in an email, and the damage spans many counties, as opposed to the narrow path typically cut by a tornado.

Most of the diocese’s church buildings made it through the storm untouched or with only minor damage, Wagner said. Many congregations have reported downed trees on church property.

The cities of Cedar Rapids and Marion were hit particularly hard, with nearly all homes in that area sustaining some damage or losing power. Top winds there were estimated at 140 mph. Congregations in eastern Iowa are supporting existing feeding programs that have struggled to respond to local needs because of the continued power outages.

The previous state mark of 123 mph was recorded in Washington, Iowa, during a 1998 derecho. https://t.co/qnR0aeJkT8

The Rev. Lauren Lyon, rector of Trinity Episcopal Church in Iowa City, lives in Cedar Rapids and reported prolonged and dangerous disruptions to normal life in the days after the storm. In addition to lost power, internet and cellular service, the storm forced restaurants to close, and food options were limited at the grocery stories that remained open.

At Grace Episcopal Church in Cedar Rapids, the front doors were blown open during the storm, causing some water damage. The congregation has been more focused on providing assistance to others in the community, according to an email from the rector, the Rev. John Greve.

“When these things occur, there is always a blessing that rises up in the midst of the rubble,” Greve said. “Many churches and civic organizations have used their resources to help feed and comfort their neighbors. The city has established neighborhood centers to assist residents.

“When the world seems to be divided irreconcilably, these things prove that we are indeed a community and will do what it takes to care for one another.”

The derecho storm comes amid heightened awareness of weather extremes that scientists fear could be worsening because of climate change. Death Valley in Southern California logged a scorching 130 degrees on Aug. 16, said to be the hottest temperature ever recorded worldwide. Wildfires again are forcing evacuations in Northern California, while East Coast residents are cleaning up after Tropical Storm Isaias, which barreled through the region earlier this month.

Wildfires raging through Northern California are threatening thousands of homes and blackening the skies near San Francisco as crews struggle to surround them. Fire officials say hundreds of thousands of acres and more than 100 buildings have burned. https://t.co/PYweea1Sqd

In Iowa, the Federal Emergency Management Agency, or FEMA, announced Aug. 17 that President Donald Trump had approved a disaster declaration to provide emergency relief to 16 counties from central Iowa east to the Mississippi River. That initial assistance will help remove debris and repair government facilities.

Some Iowa leaders, however, have expressed concern that the declaration does not yet extend aid directly to homeowners and business owners. Gov. Kim Reynolds had applied for $82.7 million in federal disaster relief, citing the 8,273 homes damaged or destroyed in the storm. She requested an additional $3.77 billion to cover agricultural damage and $100 million for utility repairs. Federal officials said Aug. 18 that it could be another week before they determine whether to approve such individual assistance.

In Grinnell, the Rev. Wendy Abrahamson said her power was out for nine days, and her parish, St. Paul’s Episcopal Church, lost several old trees in the storm. One tree just grazed, but didn’t damage, a window in the parish hall. Parishioners have joined other volunteers in helping residents remove trees from yards, putting them in piles for city crews to pick up.

“Things are getting cleared up a bit better, but there are still a surprising number of people without power,” Abrahamson said in an email to ENS. “It’s not surprising. The power lines looked like giant balls of yarn that had been beaten about by some cat.”

Wagner weathered the storm from her home in Coralville, just west of Iowa City.

“I’ve never lived through anything like it,” she said. “During the storm I got a text from my neighbor asking if I knew that pieces of my roof were now in her yard. And we were some of the lucky ones.”