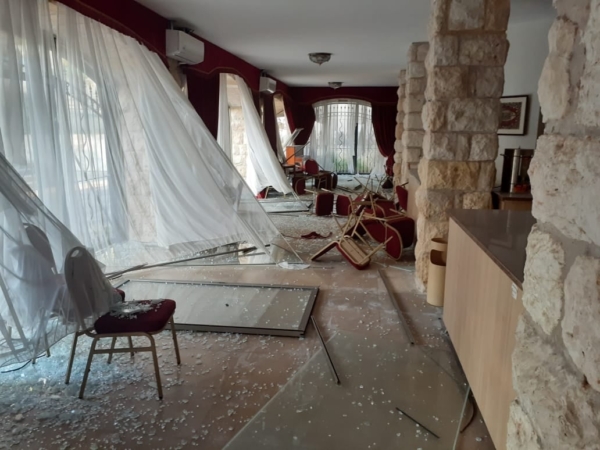 Glass doors were shattered at All Saints Church in Beirut, Lebanon, after an explosion at the city’s port on Aug. 4, 2020. Courtesy photo

[Episcopal News Service] In the aftermath of the devastating explosion that caused widespread damage across Beirut, Lebanon, on Aug. 4, Episcopalians are reaching out to their Anglican counterparts in the region to assess their needs and offer assistance. The explosion, which killed at least 135 people, injured more than 3,000 and left 300,000 homeless, leveled much of the city’s port when a fire ignited a massive amount of explosives that had been warehoused there for six years. 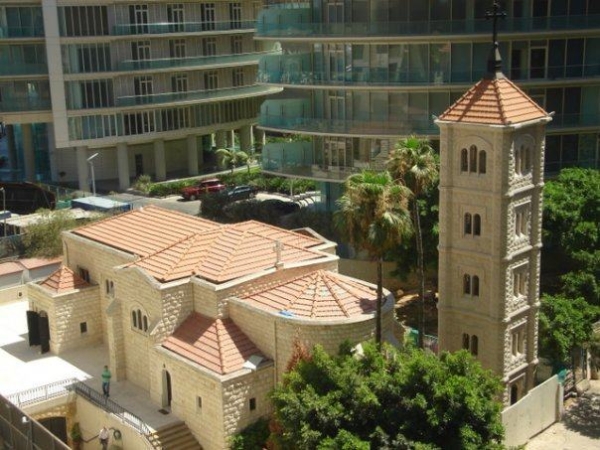 All Saints Church, part of the Anglican Communion’s Episcopal Diocese of Jerusalem, sits about a mile from the site of the explosion. Surrounded by skyscrapers, the church sustained relatively minor damage given its location; all the glass doors in the parish hall were shattered, but the sanctuary was not seriously damaged, the church’s leadership wrote on Facebook. There were no known deaths from the explosion among the church’s Arabic-speaking Lebanese and international congregations, according to the church.

“For this we thank the Lord, while we also very much grieve at the tragic accident,” the church’s leadership wrote.

The Anglican Center at the Near East School of Theology, two miles away from the blast, was also damaged, while a diocesan school for children with disabilities farther from the city center was not, according to the Most Rev. Suheil Dawani, archbishop of the Diocese of Jerusalem.

The explosion dealt a crippling blow to a country already suffering from the simultaneous disasters of COVID-19 and a catastrophic economic collapse. In recent weeks, food shortages, power outages and violent protests against government corruption and mismanagement have been the norm.

“We are all facing a new catastrophe, on top of the very challenging COVID and economic problems Lebanon is dealing with,” the All Saints leaders wrote.

The Rev. Robert D. Edmunds, The Episcopal Church’s U.S.-based Middle East partnership officer, described the additional crises that will complicate any response to the explosion.

“As challenging as things are in our country on so many levels, at this point, for Lebanon, it’s exponential,” Edmunds told Episcopal News Service.

Since the country’s main port has been destroyed, importing repair materials – like the vast amounts of glass that will be needed – will be exceptionally difficult, Edmunds said. Even getting money into the country is a problem because of the collapse of the Lebanese banking system, Edmunds learned during a call with his ecumenical partners.

Dawani issued an appeal to the Diocese of Jerusalem’s international partners for relief funds to repair All Saints Church and the Anglican Center, “but also to engage in a larger outreach effort to those members of the communities in Beirut most stricken by this tragedy.” All Saints, being close to the blast but relatively unscathed, might be well positioned to help with relief efforts, Dawani said.

In the U.S., that appeal is being implemented by the American Friends of the Episcopal Diocese of Jerusalem, which has set up an emergency relief fund. The Middle East Council of Churches is also organizing an appeal, Edmunds said.

Dawani and All Saints’ leadership also asked for prayers as Lebanon endures yet another crisis.

“Thank you for your prayers as we continue to seek to be a light for Christ in this bleak city which is suffering so much,” the All Saints leaders’ letter concluded.