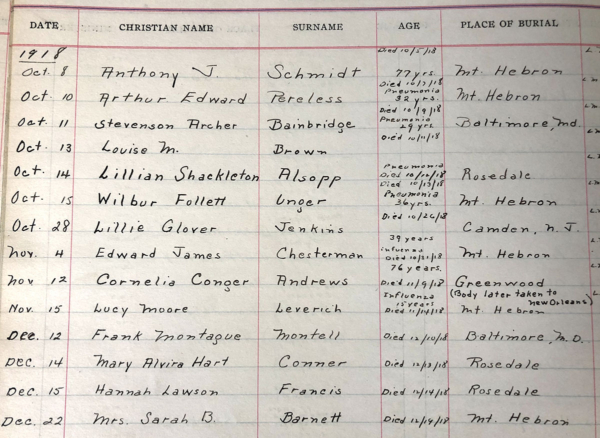 [Episcopal News Service] As the coronavirus began its spread in the United States in the spring, Episcopal clergy and parish historians began searching weekly service registers and records of baptisms, marriages and burials for clues about the 1918 flu pandemic’s impact on their congregations and parallels with COVID-19.

In some places, records showed an uptick in burials – one after another for days. Some show notations of canceled worship services, and many people have found inklings of stories about which they wish they knew more.

The 1918-19 influenza, caused by an avian H1N1 virus, came in three waves. At least 50 million people died worldwide, including approximately 675,000 in the United States. The three-month period from September to November 1918 saw the height of the second wave; an estimated 195,000 Americans died that October alone.

In mid-March of this year, as the Diocese of Newark began gradually shutting down in-person worship, the Rev. John Mennell, rector of St. Luke’s Episcopal Church in Montclair, New Jersey, pulled out the 1918 service register.

“It doesn’t look like things slowed down dramatically,” he told Episcopal News Service.

Mennell found that while Sunday services were canceled on Oct. 13 and 20, weddings took place on Oct. 12 and 17, the latter with 60 people present. When services resumed on Oct. 27, 414 came for Morning Prayer. Another 19 attended an early morning Communion service, and 58 gathered for Evening Prayer. The Nov. 1 celebration of All Saints’ Day fell on a Friday that year and 125 came for Holy Communion. Two days later, 438 came for the Communion service on the first Sunday of the month.

Five children were baptized during the height of the pandemic’s second wave: two in late September and three in mid-November. And then there were the burials. “It’s pretty steady,” Mennell said. The register shows 14 burials from Oct. 8 through the end of the year, with half of those occurring in October, six between Oct. 8 and Oct. 15 alone.

“While services may have been shut down for a couple of weeks, it doesn’t look like much else was down,” he said. A century later, St. Luke’s has taken a different approach to Sunday services and has not held in-person worship since mid-March.

Jamie Green, parish historian for Christ Church in Shrewsbury, New Jersey, consulted yet another source of information about the life and times of the 318-year-old congregation. Reading the vestry minutes from 1917 to 1920, he found no mention of the pandemic “or the war, for that matter,” he said. “Then again, the record of those meetings is pretty thin.”

Green also searched the pages of the Red Bank Register, then the local newspaper. An article from Oct. 9 reported the local health board’s closure of “all motion picture places, churches, schools, dance halls, pool rooms, lodge rooms, saloons, soda fountains and other places where numbers of people congregate.” The article noted that people who died of influenza or pneumonia could not have “public funerals.”

The Oct. 16 issue of the Register featured a short story about John Lang, the church’s sexton. Due to the church building’s closure, Lang was supposed to have Sunday, Oct. 13, off, his first in 28 years as sexton. “He was eating breakfast Sunday morning when a party called at his home and said a grave was wanted in one of the church yards and that the work would have to be done immediately,” the article said.

As the coronavirus continues to spread quickly in the South, Midwest and West, states that recorded high infection rates and deaths early on in the pandemic – such as New York, Connecticut and New Jersey – have slowly begun to reopen. Christ Church, with permission from the Diocese of New Jersey, resumed in-person worship July 5 after almost four months.

In Montana, where as of Aug. 2 cases have increased by 10% from the average two weeks earlier, Holy Spirit Episcopal Church in Missoula has decided not to resume in-person worship until at least September. 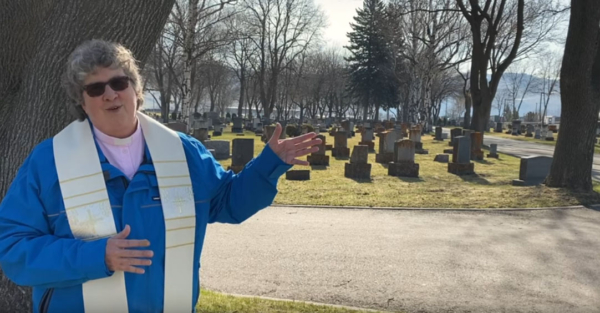 The Rev. Terri Ann Grotzinger, rector of Holy Spirit, went to the church’s records to see what happened during the 1918-19 pandemic in the then-36-year-old congregation. The city’s infection rate between October 1918 and March 1919 reached about 25%. An estimated 5,000 Montanans, or about 1% of the population at the time, died.

The October deaths listed in the church’s records begin with a famous Montanan, Granville Stuart. Described as a pioneer, gold prospector, businessman, civic leader, vigilante, author, cattleman and diplomat, Stuart died at his Missoula home on Oct. 2. Heart failure is the cause of death listed in the burial register, but Stuart was known to have suffered from tough bouts of influenza and other respiratory illnesses. He was 84.

The next entry in Holy Spirit’s burial register is Marjorie Mary Hogue, 9, who died on Oct. 16. “Spanish Influenza” is listed as the cause. She was buried two days later near Hope Avenue in the Missoula City Cemetery.

Incidentally, it was called the Spanish flu, not because it originated in the Iberian peninsula, but because Spain remained neutral during World War I and, unlike other nations engaged in war, did not suppress the story.

Two other parish members are buried nearby. Sidney Dunbar, a 19-year-old from Potomac, Montana, and the first flu fatality from the Student Army Training Corps on the University of Montana campus in Missoula, died Oct. 18. Anna Pabst Agethen, 70, died two days later of “heart trouble,” according to the register.

Grotzinger preached her Easter sermon in the cemetery near the graves of Hogue, Dunbar and Agethen. The Easter story is about hope, she said, so preaching near the graves of Holy Spirit members buried along a street called Hope seemed fitting. Grotzinger’s sermon was part of a Liturgy of the Word service recorded in various places around Missoula.

Twenty Holy Spirit members died between Oct. 2 and Dec. 28, nearly all of them from influenza and related causes such as pneumonia. Most were in their teens, 20s and 30s. In addition to 9-year-old Hogue, another girl the same age, Harriet Louise Oates, died on Christmas. The register lists similar deaths into 1919, but in all, just 11 deaths are listed for the entire year.

Grotzinger also found an entry in the parish’s baptismal register for Sept. 19, 1918, that lists the baptisms of two girls whose mother was “too weak to come to church.” Martha had been born two days earlier and Margaret was nearly 18 months old. While the mother might have been too weak because of her labor, Grotzinger said she found no other reference to a mother’s health and only one other instance of baptisms conducted in a family’s home, when a 5-day-old girl and her 1-year-old sister were baptized at home on Dec. 17. 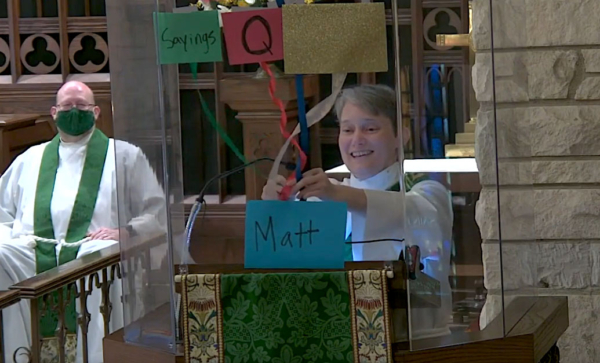 During a recent sermon, the Rev. Tracie Middleton, a deacon at Trinity Episcopal Church in Fort Worth, Texas, uses the Plexiglas pulpit shield as a see-through bulletin board on which she taped pieces of paper to illustrate how Matthew’s Gospel is a remix of other material. Trinity’s rector, the Rev. Robert Pace, who has recovered from COVID-19, looks on. Photo: Trinity Episcopal Church video screenshot

In Fort Worth, Texas, Jane Gillett, the office and events coordinator for Trinity Episcopal Church, found something that many register explorers have encountered: The records are often incomplete. There are 14 deaths listed on Trinity’s 1918 register. None list influenza as the cause of death, but the virus raged through the area that fall.

In September 1918, Dr. A.W. Carnes, a health officer, said that the “general health situation in Dallas is good.” A month later, 1,200 people in that city and neighboring Fort Worth were dead, according to the Fort Worth Star-Telegram.

Trinity’s only burial entry that does list influenza comes on July 10, 1919, about the time that the third and final wave of the pandemic was subsiding: Archie Edward Parnum, who was born July 17, 1917, and had been baptized on Oct. 7 of that year; he was just shy of his second birthday.

Gillett, who has been using the closure of Trinity’s buildings to update the parish’s membership records and registers, found 22 blank lines in the burial register after an April 29, 1919, entry. She wonders if there had been mass burials or if the person responsible for maintaining the register was sick or caring for family members.

Trinity had a firsthand experience of the current pandemic when its rector, the Rev. Robert Pace, started feeling sick the day after Ash Wednesday. He was hospitalized and has since recovered. He and a small altar party have been broadcasting services from the sanctuary via Facebook Live and YouTube.

“We’ve been doing some old things and some new things,” the Rev. Tracie Middleton, Trinity’s deacon, said during her sermon from a Plexiglas-shielded pulpit on July 26. “We’ve been remixing church.”

To make her point, as Middleton preached, Associate Rector the Rev. Amy Haynie and parishioner Luanne Bruton posted comments, questions and links in the Facebook comments section. Middleton also used the barrier as a see-through bulletin board on which she taped pieces of paper to illustrate how Matthew’s Gospel is a remix of other material.

The parish’s Regathering Task Force recently announced that nearly 65% of the 137 people who responded to a congregational survey said they or a member of their household are at high risk of developing serious complications from COVID-19. Slightly more than 26% said they plan to wait until a vaccine is widely available before they return to in-person worship. Trinity has not made a decision about when its members will gather once more in person for worship.