[Episcopal News Service] The Brotherhood of St. Andrew’s top national leaders have issued a “statement of public apology” after the 137-year-old organization’s mishandling of internal discussions over its racial reconciliation work and its response to national protests against racism and police brutality.

The letter, dated July 30, acknowledges that national board members of the Episcopal men’s ministry “made regrettable mistakes” during their review of a draft statement about the May 25 death of George Floyd and other police killings of African Americans. Three Black members of the national board resigned last month after Brotherhood President Jeff Butcher reacted negatively to the statement proposed by an ad hoc committee of the board.

“Our mistakes have caused a loss of trust within the Brotherhood and resulted in the resignations of three valued leaders,” the letter said. “This is a painful indication that we have not lived up to our mission as a Christian brotherhood, and for this we are truly sorry.”

The letter was attributed to Butcher, Senior Vice President Jack Hanstein and Dick Hooper, who as national council chairman is responsible for overseeing planning of the organization’s annual meetings. The organization has yet to issue a public statement on Floyd’s killing or the subsequent nationwide protests, but the three top leaders committed the Brotherhood to “a new phase of the journey of truth-telling, learning, listening and ultimately, with God’s help, reconciliation.”

As part of that process, they have asked the Rev. Shaneequa Brokenleg, The Episcopal Church’s staff officer for racial reconciliation, to help bolster the Brotherhood of St. Andrew’s antiracism efforts. The church has long called for Episcopalians to engage in that work, most recently through its Becoming Beloved Community framework.

“We know the work of building Beloved Community has no finish line and that this work of racial reconciliation is in fact a commitment to a new way of being – as individuals, as Brothers Andrew and as Christians,” the organization’s leaders said in the statement.

Those leaders had sounded a conciliatory tone earlier as well, in interviews with Episcopal News Service last month about the board upheaval, though it appears unlikely in the short term to mend relations with the three board members who resigned.

“It doesn’t change anything for me with respect to the primary issue,” Joe McDaniel told ENS in an Aug. 4 text message. He had served for about three years as national vice president of the Brotherhood’s racial reconciliation committee until he quit in protest on July 10.

The Brotherhood “failed to do the right thing when it had the initial opportunity,” McDaniel said, suggesting the recent letter was a “public relations spin on being caught engaging in racist behavior.”

The two others who resigned were Karl Colder, head of the addiction recovery committee, and John Robinson, the Brotherhood’s Province I president.

After the three resignations, the Brotherhood of St. Andrew published in its newsletter, The Cross, an article attributed to McDaniel that speaks of “the need for real conversations about racial disparities, inequality and injustice.” McDaniel told ENS he previously had submitted the article and it had been rejected.

Internal written communications and interviews with board members revealed disagreements over whether to emphasize the role of systemic racism in Floyd’s killing and how to describe the public protests. 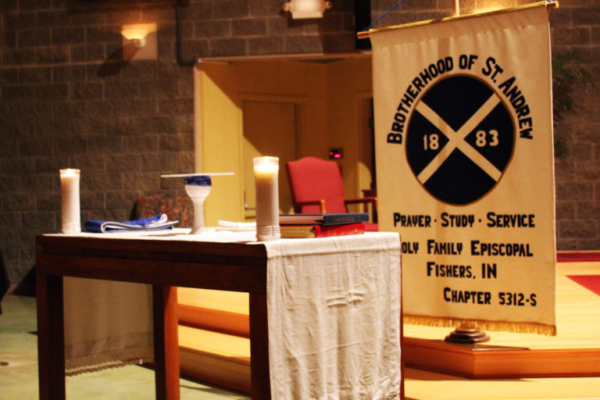 The Brotherhood of St. Andrew was founded in 1883 in Chicago, Illinois, and now has more than 350 chapters at Episcopal churches around the United States. Photo: Holy Family Episcopal Church, Fishers, Indiana

The Brotherhood of St. Andrew touts itself as The Episcopal Church’s oldest men’s ministry, with more than 5,000 members and more than 350 chapters in the United States. While maintaining its general focus on prayer, study and service, the Brotherhood under Butcher has restructured its national operations in an effort to be more responsive to its chapters’ needs. As part of that effort, it identified seven core ministry areas, from veterans outreach to human trafficking. Racial reconciliation was among those areas of emphasis.

McDaniel, a retired lawyer from Pensacola, Florida, has been a prominent lay leader in efforts churchwide and in the Diocese of the Central Gulf Coast to confront The Episcopal Church’s historic complicity in racist systems. But after he was chosen for a national role in the organization in 2017, McDaniel alleged the Brotherhood offered him little financial support or encouragement to expand the antiracism workshops he had been tasked with leading.

He also chaired the ad hoc committee that convened July 7 to draft a statement on Floyd and the deep-rooted systemic racism that many say is built into American institutions and social interactions.

Butcher responded by suggesting the proposed statement was too political, engaged in “identity politics” and would only fan the flames of division in the United States.

The July 30 apology letter doesn’t address Butcher’s specific comments, though it thanks those “who truthfully and courageously pointed out our painful errors.” It doesn’t identify McDaniel, Colder or Robinson by name.