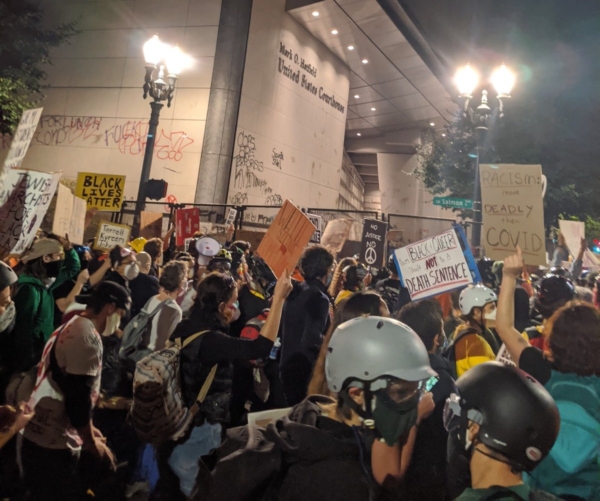 [Episcopal News Service] When the Rev. Sara Fischer heads downtown in Portland, Oregon, to show solidarity with the protesters there – which she has been doing most nights since July 17 – she sees two very different worlds: a world of violence and a world of love.

She has seen people selflessly taking care of each other, and she has seen escalating confrontations between law enforcement officers and people demonstrating against systemic racism and police brutality. Protests have taken place in Portland for 62 days straight since the May 25 killing of George Floyd by police in Minneapolis, Minnesota. In early July, the protests began focusing on the federal courthouse in downtown Portland and the Trump administration sent more than 100 federal agents there, saying they needed to protect the building from the vandalism that was occurring. State and local officials were not aware of the move until unidentified agents were filmed grabbing protesters off the streets and throwing them into unmarked vans. 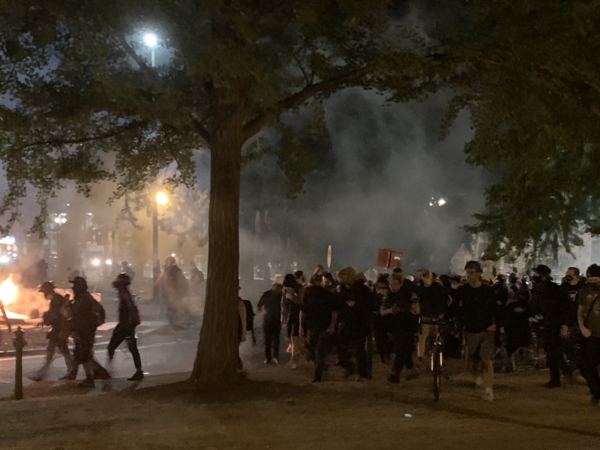 On July 29, Oregon Gov. Kate Brown announced that she had reached an agreement with the federal government for a “phased withdrawal” of agents from the courthouse, which would then be protected by the Oregon State Police, starting July 30. However, that same day, acting Secretary of Homeland Security Chad Wolf said federal agents “will remain in Portland until we are assured the courthouse and other federal facilities will no longer be attacked.”

Faith leaders like Oregon Bishop Michael Hanley have stated their support for nonviolent protesters and their opposition to the deployment of federal agents to Portland.

“These forces are, by most accounts, not helpful and it is my belief that they should leave. I support our mayor and others who are calling for their removal,” Hanley wrote to his diocese on July 26.

And during their virtual meeting on July 29, the House of Bishops approved a pastoral letter expressing concern over the federal agents’ actions.

“If there is one event during the time we met which encapsulated all the anxieties and aspirations of U.S. bishops in the House, it is the situation in Portland, Oregon, and other cities,” the bishops wrote. “We certainly share and understand the concern for protection of life and property. What troubles us is the unprecedented nature of the federal response to a largely peaceful protest. … We commit ourselves both to advocate for continued nonviolence on the part of the protesters across the United States and for a return of policing authority to local agencies who are known by and accountable to the people’s elected representatives.”

Fischer, the 60-year-old rector of Saints Peter & Paul / Santos Pedro y Pablo Episcopal Church in Portland, had been attending earlier protests in other parts of the city and first went to the courthouse protests on July 17 to hear Portland City Commissioner Jo Ann Hardesty speak. Hardesty had asked faith leaders to show up, so Fischer spent a “lovely summer evening” there but didn’t stay long. 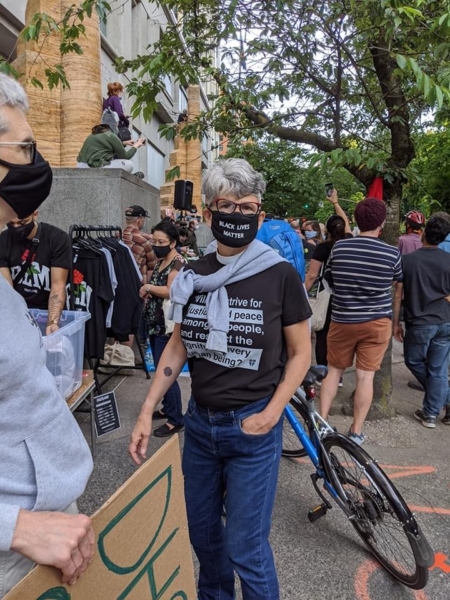 The next night, wearing her clerical collar, she went back “to see what it’s like late.”

“I just couldn’t tear myself away,” she told Episcopal News Service. “That was the first night that the ‘Wall of Moms’ was there … but there were only about 40 of them.

“I just was sort of swept up in the chanting and the sense of huge numbers of people coming together because they all cared about the same thing, which is Black Lives Matter and protesting the presence of federal troops. … There’s people playing music, there’s people giving away a lot of free food, there’s water everywhere, there’s just a sense of focused protest that felt really powerful to me.”

Fischer saw a man wearing a purple vest that said “Clergy Witness” on the back. Intrigued, she “made a beeline for him” and asked him about it. He was a member of the Portland Interfaith Clergy Resistance, whose members attend the protests to document what happens and protect vulnerable people.

“I felt like there was a real space for clergy with witness,” Fischer said, and she connected with the group online. They have a spreadsheet with sign-up slots, so about three or four of them are at the courthouse on any given night, she said. One night she went “not as a priest but as a mom,” joining the Wall of Moms in their distinctive yellow T-shirts.

The evenings typically follow the same order of events, as if on a schedule, she said. Protesters gather at the perimeter fence that has been erected around the federal courthouse, inside which federal agents are stationed.

“There’s a distinct pattern every night, which is that there’s speakers that usually go until about nine. There’s a lot of chanting. Sometimes there’s a march,” Fischer told ENS. “But usually around 10:30, 11, a very small handful of protesters – very small – start engaging in provocative behavior. And usually around 11, 11:30, the federal troops come out of the courthouse and start throwing or shooting pepper bombs and canisters of tear gas.”

“My eyes were very watery, my nose was running, everything was kind of burning,” she said.

Fischer said the tear gas is usually preceded by “provocative behavior” – people throwing things or trying to cut through the fence with bolt cutters, for example – but believes the agents’ response is an ominous statement on “the value of property versus humans.”

“There’s a really important distinction between violence and vandalism,” she said. “Violence is against humans and vandalism is against property, and if you equate the two, you’re devaluing humans.”

Fischer hasn’t witnessed any of the widely reported incidents of protesters being taken away by unidentified officers, but the whole scene is a “really awful situation,” she said.

For her, being a clergy witness means watching out for illegal behavior by law enforcement agents, but also “standing with people and being calm and providing comfort.” She has been especially inspired by those who are there to provide relief in the form of food, water and medical care.

“Whenever I’m there, in the course of an evening, a dozen people thank me for being there. And I have a lot of really great conversations with people. And sometimes I’m just asking them about their experience, and sometimes I’m talking about how the mutual aid, which I see on the ground night after night, reminds me of beloved community.”

People from very different faith backgrounds – from the ex-Christian who showed her the Christian tattoos she kept covered up to the young Catholic couple who had driven there from Kansas City to join the protests – have engaged with her and thanked her. She also uses her presence to try and keep the protesters safe, though that has had a limited effect, she said.

“I’m there out of compassion and concern for all the protesters. And I think the first time I went down there I thought, well, nobody’s going to throw tear gas at a silver-haired white lady in a collar. And it turns out that there’s so many people there, the feds don’t really discriminate.”

Fischer doesn’t know what to expect next, but she sees it as part of her duty as a priest to protect those who are in danger and support their message, regardless of the ways in which they protest. As much as she would prefer to see completely nonviolent protests, she understands why that’s not the case.

“I think that the church’s role is to protect and defend protesters, to be present, to show up,” she said. “The last two Sundays, we’ve had these two sorting parables [as Gospel readings]. Two weeks ago, we had the wheat and the weeds, and last Sunday one of the parables was the net that gets sorted at the end of the age. And what both of those parables say to me is, it’s not up to me to say that there are good protesters and bad protesters.”

The Gospel reading for July 26 also included the parable of the mustard seed, which she compared to the yellow-clad Wall of Moms in her sermon.