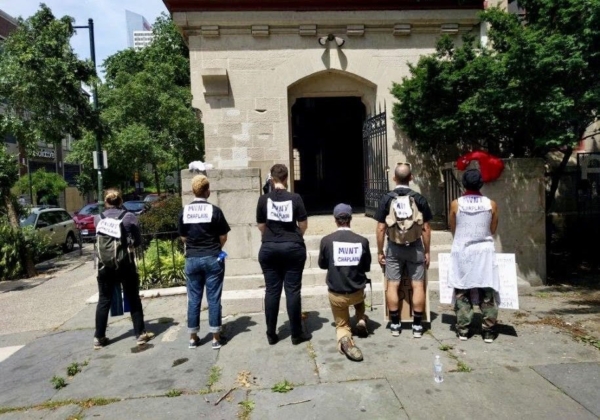 [Religion News Service] The Rev. Kimberly Jackson remembers the disappointment and devastation that erupted after the execution of Troy Davis nearly 10 years ago in Jackson, Georgia.

Years of canvassing and protesting ended with activists weeping and embracing outside the prison after Davis was put to death by lethal injection. Davis, a Black man who maintained his innocence, was on death row for two decades after being convicted of murdering a Savannah police officer.

“Not In My Name” and “I am Troy Davis” slogans emblazoned T-shirts and protest signs in Georgia.

During that time, Jackson, who was freshly ordained as an Episcopal priest, found herself serving as a spiritual companion to Davis’ supporters and those involved in the movement against the death penalty.

She did traditional clergy activities like leading a prayer vigil or a pray-in. A chaplain for Morehouse, Spelman and Clark Atlanta, she also guided students who sought to get involved in the cause.

After the execution, activists approached Jackson with urgent questions, asking her “Where do I find hope?” or “Why isn’t God doing something here?”

“These are folks who didn’t go to my church. Many of them don’t go to church at all, but they needed a person who they understood to be somehow connected to something much bigger,” said Jackson, vicar of Church of the Common Ground.

Jackson embodied an emerging vocational role that’s now being referred to a movement chaplain, whose purpose is to provide spiritual and emotional care to activists and organizers before, during and after demonstrations.

Chaplains — who perform ministerial duties apart from a house of worship — have long been familiar faces at airports, hospitals, colleges, military bases and prisons. They do ministry in the midst of everyday life. It’s not uncommon to see them in homeless shelters or in New York’s subway stations.

As fewer people identify with a specific religion or attend religious services, Americans may be more likely to meet a chaplain than a local clergy person at a congregation.

In recent years, movement chaplains have become more visible in protests for immigrant rights, at rallies against white nationalist groups and in demonstrations supporting the Black Lives Matter movement.

Movement chaplaincy, as Micky ScottBey Jones described it, is in the “lineage of something that has been happening for a long time.”

“We just didn’t have a name for it,” said ScottBey Jones, the director of healing and resilience initiatives at Faith Matters Network, a Nashville, Tennessee-based group that equips faith leaders and community organizers with wellness resources.

ScottBey Jones has big aspirations for movement chaplains. She envisions students in divinity schools being ordained into the role. She’d also like to see grants made available to fund movement chaplain teams.

So far, more than 300 people have gone through movement chaplaincy training and workshops hosted by Faith Matters Network. The training involves people who are atheists, Indigenous, Jewish, Buddhists, Christians and Muslims.

They show up to protests, yes, but they also embed themselves in movements by attending meetings where organizers are planning the rallies. They’re at the side of activists after a demonstration to help them vent or debrief.

ScottBey Jones said this role is critical to address the “activist martyrdom syndrome” that can lead to compassion fatigue, health problems, burnout and even suicide.

She noted Ohio Black Lives Matter activist Marshawn McCarrel, who died by suicide in 2016. His death shed light on the struggles with depression many activists in the national protest movement face.

“We deal with the stress and the trauma that people go through when they engage oppressive forces,” ScottBey Jones said.

On July 29, Faith Matters Network, in partnership with Odyssey Impact and Chaplaincy Innovation Lab, is hosting Movement Chaplaincy: Meeting Spiritual Needs in our Struggles for Justice. The online conversation will touch on how faith leaders are using their pastoral skills in a time of social change.

And this upcoming October, Faith Matters Network will offer a 12-week online training for movement chaplains to learn de-escalation and mediation practices. It will cover ways to respond to stress, burnout and trauma.

So far, clergy, lay leaders and spiritual practitioners have been among those filling this chaplaincy role. Not all are ordained or wear their collars. Many are women and include LGBTQ and people who identify outside a gender binary.

To ScottBey Jones, these demographics make sense because they represent communities and identities on the front lines of disparities and discrimination.

Movement chaplains have been seen at protests wearing fluorescent vests or signs to identify their roles. In a recent demonstration in Philadelphia, a group pinned white patches on their backs with the words “MVNT CHAPLAIN.”

And, they’re not to be confused with other clergy at rallies who, ScottBey Jones said, tend to assume positions of authority either by standing between police and protesters or even getting arrested in solidarity with activists.

Instead, movement chaplains can help create ceremonies and prayers for protests and meetings. They offer bodywork and herbal remedies. They accompany people of all or no religion. They use spiritual practices, sacred texts and physical comfort as ways to include healing in movement spaces.

“This is a way you can still offer support, love and care without having to be that upfront and in-charge person,” ScottBey Jones said. “I think both are necessary.”

This makes sense to the Rev. RJ Robles, an ordained Christian minister with the Disciples of Christ.

To Robles, 28, this is one of many ways to show up for people in need.

After George Floyd was killed by Minneapolis police in May, Robles and other movement chaplains attended a protest that reached several thousands of people in Nashville. Robles took water bottles to distribute and also kept a wary eye in case any protesters felt unsafe and needed somebody to walk with.

Movement chaplaincy takes on many forms.

Robles, who identifies as a trans nonbinary organizer, recently accompanied a friend who had a stillbirth and experienced a risky surgery.

The family sought Robles, whose upbringing, identity and cultural understanding mirrored theirs. The hospital chaplain, Robles said, wasn’t somebody the family connected to because that person was white and cisgender, a term for people whose gender identity matches the sex they were given at birth.

“Being brought in and called by my friend to be there for her and her family … I put on my hat as a pastor, as a healer and as an organizer so I could move in that space to be their chaplain in that moment,” Robles said.

In Philadephia, the Rev. Margaret Ernst, an ordained minister with the United Church of Christ, is working on building ties with activist groups who may be in need of chaplaincy care as they continue to organize around racial justice and the movement to defund police.

“Ideally, we believe it’s best when movement chaplains are in real long-term relationships with people who are leading protests,”said Ernst, 31, an associate pastor at Chestnut Hill United Church.

Ernst, who also works for Faith Matters Network, said some organizers don’t know who chaplains are or what they do. She often describes her group of chaplains as “healing” or “care” teams that can help de-escalate any conflicts that may arise.

As she works to build those relationships, Ernst has found herself fulfilling varying roles as a movement chaplain. In one rally, Ernst wound up having to block a street so people could safely cross.

The way Ernst sees it, “I can’t care for people’s spiritual needs, if they are not physically safe,” she said.

Recently, Ernst called an organizer, who was behind a big rally in Philadelphia, to introduce herself as a movement chaplain who was ready to serve.

“She was like, ‘Wow,’” Ernst said. “I could hear in her voice a sound of relief that ‘there are people out there who can just care about us as organizers and who we are in our fullness as humans.’”